Bath: The Best-Kept Secret in England? 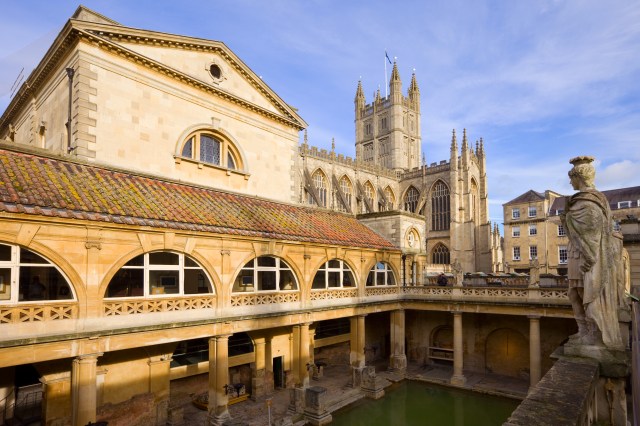 Calling Bath a best-kept secret may be a bit misleading.

The city is one of the 10 most visited places in Britain each year, a World Heritage Site dubbed one of the “great spa towns of Europe.” But for those of us here on the other side of the pond, destinations such as London or Dublin or Glasgow steal the tourist thunder. For many Americans, the city of Bath is an afterthought, at best.

And that’s a shame because in some ways, Bath represents some of the most fascinating aspects of Britain all rolled into one. Of course, there’s the beauty of the English countryside and River Avon. But more to the point, Bath is a city where ancient and historic cultures intersect.

The city is just an hour’s drive from prehistoric Stonehenge. It’s near the site of the Battle of Badon, where King Arthur defeated the Anglo-Saxons. And it was in Bath in 973 that Edgar of England was crowned king in a ceremony that became the template for all future coronations. And we haven’t even gotten to the 11th century yet.

But let’s start with the reason Bath is called Bath in the first place: the Roman occupation.

After Rome conquered Britain in 43 A.D., its soldiers were soon drawn to the area’s natural hot springs. By 100 A.D., a religious and spa complex, dedicated to Minerva and the Celtic goddess Sulis, was erected.

The Romans kept adding to the spa, building out the complex and city for the next 300 years. The Roman Baths remaining today are stunningly well preserved, offering a full glimpse of its scope and sophistication.

The Great Bath is the spa’s centerpiece, a swimming pool-sized hot tub flanked by columns, with a roof overhead. There were also separate areas for hot baths, warm baths and cold baths, and the customary “laconicum,” a super-intense sauna.

The accompanying museum tells a crystal-clear tale of the city’s origins, glory and downfall. You can even sample the spring water in the spa’s Pump Room. I have to warn you, though, it’s not very tasty.

Ancient history wasn’t the first thing that struck me about the city of Bath though, oddly enough. It was how the city was laid out and built up in the 18th- and 19th centuries.

Bath as it is now was constructed mostly during a 100-year era known as the Georgian period. And there’s a breathtaking homogeny to the city’s skyline unlike anything I’ve seen.

Essentially, what gives the city of Bath its distinctive appearance is its color. Many of the buildings were constructed with the same locally sourced golden stones and feature similar flourishes. And most of the streets, parks and buildings were laid out by John Wood, the Elder, an 18th century English architect.

Maybe that’s why Bath – not just the Roman Baths but the entire city – is named a UNESCO World Heritage Site, the only such city in the United Kingdom.

When you scan the city’s terraced horizon, it’s difficult to tell where one row of buildings end and another begin. Watching the sun set over the city is incredible, with oranges and purples mixing with Bath’s own honey-hued skyline.

Day Tripping to the Stone Age

John Wood, the Elder, was also notable for being the first person to map out Stonehenge, the iconic stone circle constructed between 3000 and 2000 B.C.

Wood surveyed Stonehenge in 1740, publishing an account with hundreds of painstaking measurements in the footnotes. And his survey stands as an important archaeological document today: It includes areas of stones which collapsed just 50 years later, in 1797.

Bath is a living history lesson, a compressed account of Britain from the Druids to the Romans to King Arthur to Jane Austen (one of its most notable residents) to WWII. And there are landmarks I haven’t even mentioned, such as Bath Abbey, founded in the 7th century, and Pulteney Bridge, built in the 18th century with shops on both sides (pictured below).

But even if you disregard all of its history, the city is beautiful in its own right. Its public parks, especially Royal Victoria Park, should be part of any day-trip itinerary.

Add it all up and Bath truly is a timeless place, as historic as it is seductive, as cultural as it is idyllic.

Take the hassle out of travel and book an adventure today with AAA Travel.

What’s your favorite “best-kept secret” spot? Let us know in the comments below.