Things To Do In Naples, Florida, and Marco Island 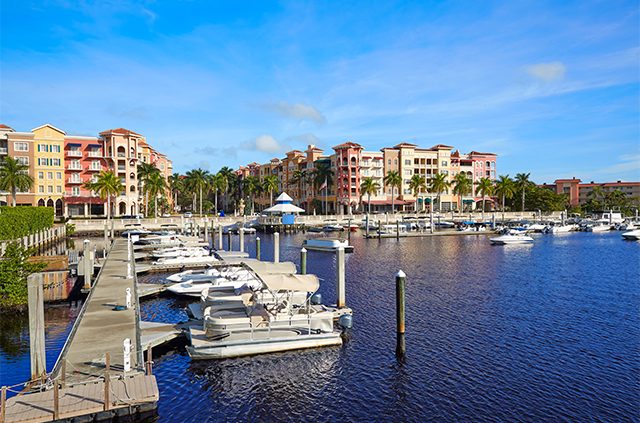 Water plays an important part in many of the beautiful and fun things to do in Naples, Florida and Marco Island.

At this time of the year, who wouldn’t want to shed their puffy coats and head to Naples, Florida to soak up some sunshine along the Gulf of Mexico? I did just that on a recent visit to south Florida’s Paradise Coast, a scenic region comprised of Naples, Marco Island and the western portion of the Everglades.

I had long heard that Naples was an exclusive enclave and while it certainly has its share of stately beachfront mansions and upscale shopping, it also has a relaxed side and a growing farm-to-table dining scene.

Here’s some tips on things to do in Naples, Florida, and beyond, plus a few more things that should definitely be part of any upcoming Paradise Coast itinerary.

Where to stay in Naples, Florida, and Marco Island

The year-old Hyatt House Naples sits on the Gordon River and has a sleek modern design in the lobby and in the 183 rooms (some come with kitchenettes). You’ll definitely want to relax in the lagoon-style pool overlooking the river (keep an eye out for the occasional dolphin or manatee) and come dusk, have a craft brew in Latitude 26 bar/restaurant or by the outdoor fire pit. From the dock you can board a water taxi to neighboring Tin City, lined with seafood restaurants and festive bars. You can also rent a small fishing charter here and the chef will clean and cook your catch.

The big news on Marco Island (a 15-minute drive from Naples) is the debut of the JW Marriott Marco Island Beach Resort (newly rebranded to a JW after a $300 million renovation—the final phase, the swanky Lanai Tower will be completed later this year). Its Balinese-style pavilions and stunning three miles of white-sand beach, plus a range of amenities make it one of the low-key island’s premier properties. Chill out in a beach cabana or by one of several pools (including one that’s adults only), collect shells along the shore, indulge in a coconut scrub in the spa and come sundown, and order a flight of rum in Kane, a newly opened thatched-roof tiki bar (see below for more resort dining options). 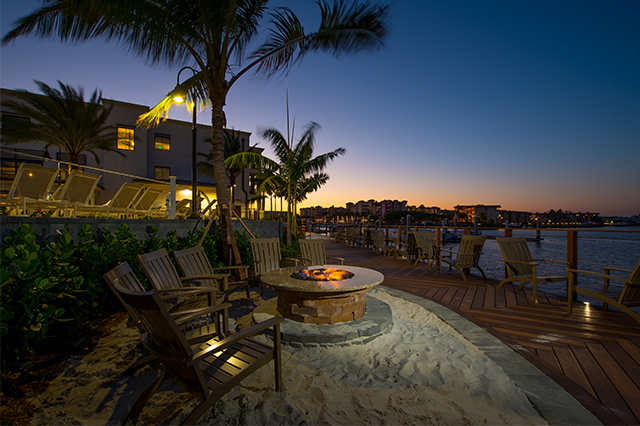 The Inn on Fifth, a glamorous boutique hotel in Naples, is just steps from the avenue’s top shops, restaurants and cafes. Rooms feature modern art, leather accents and some have balconies (if you want to splurge, book a Club Level suite in the luxe wing across the street with a fully-stocked concierge lounge). After a day of exploring, the pool deck is a comfy spot to unwind and have lunch and in the evening, dine in its new restaurant, Ocean Prime Steakhouse.

Another hotel fresh from a makeover is the Hilton Marco Island Beach Resort, which just unveiled its $40 million renovation, which includes new poolside suites with verandas and top-floor family suites with interconnecting room options. The pool area has also been upgraded, and newly introduced is the Deck at 560 Bar & Restaurant, an indoor/outdoor space with water views serving dishes like steamed South Florida clams and Gulf Coast snapper.

The Ritz-Carlton, Naples sits on a pristine beach on the Gulf of Mexico. Sit at one of the outdoor tables in the casual Gumbo Limbo and enjoy the nightly sunset while dining on conch chowder and crab cakes (a more upscale experience can be had at The Grill). There’s also a pampering spa and even afternoon tea. A few miles away is the Ritz-Carlton Golf Resort where you can tee off on two Greg Norman-designed courses or play a few sets of tennis on Har-Tru courts.

Eating in Naples,Florida and Marco Island

Getting a bite to eat is one of the best things to do Naples, Florida. Osteria Tulia, a rustic Italian restaurant on Fifth Avenue, is a definite a hot spot in downtown Naples. You can’t go wrong with anything on chef Vincenzo Betulia’s menu, but the caramelized Brussels sprouts with house fennel sausage, the wood-charred octopus and the homemade pastas (tortelloni with roasted short beef rib, potato gnocchi, etc.) blew me away. Just next door is Bar Tulia, serving small plates and known for its craft cocktails, fun happy hour and late-night dining (little wonder it’s a locals’ favorite). And a few doors down is Betulia’s just-opened brasserie called The French, with classics like steak frites and roasted chicken, along with French wines, many from boutique vineyards.

The southwestern coast of Florida is called the “Stone Crab Capital of the World,” especially Everglades City, a sleepy fishing village on Chokoloskee Bay, known as the western gateway to Everglades National Park (a 45-minute drive from downtown Naples). There are numerous spots to sample these crustaceans but be sure to try City Seafood, where you can get enjoy fresh-off-the-boat seafood in a casual dockside setting overlooking Barron River as pelicans and seagulls fly overhead. Order a platter of crabs (the season mid-October to mid-May), which are served cold and come with an accompanying homemade honey mustard dipping sauce (sometimes drawn butter is served with the crabs as well).

The Local, the first farm/sea-to-table restaurant in Naples, is a must visit. Amid industrial-chic interiors with a blackboard for daily specials, owner-chef Jeff Mitchell, who trained at the Culinary Institute of America, creates incredibly delicious dishes using ingredients sourced from local farmers, fisherman and purveyors. I had an insanely good smoked turkey sandwich, with Brie, tomato jam and pesto mayo, and I also sampled a few flatbreads topped with various ingredients (mushrooms, feta, eggplant, sausage, etc.). Entrees include grass-fed beef and a butcher’s cut of Palmetto Creek Farms pork and the craft beer list has local brands like Maduro Brown Ale from Cigar City Brewing in Tampa. 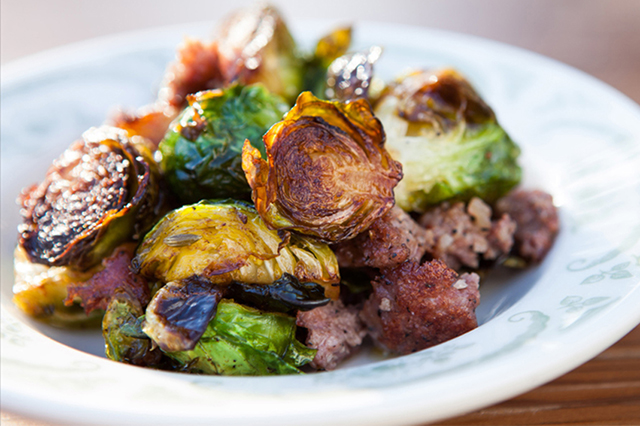 Osteria Tulia is one of many options for scrumptious food in Naples, Florida. (Photo: Osteria Tulia)

There are numerous dining options within the JW Marriott on Marco Island. Ario serves seafood and dry-aged meats in an elegant setting, while the more causal 400 Pazzi’s has brick-oven flatbread pizzas and pastas on its menu, along with wine on tap (sit on the outdoor deck). I had a terrific Sunday brunch at Maia, where the buffet has just about every breakfast item you can imagine from an omelet station and pancakes to bagels with all the fixings and pastries (as well as healthy items like oatmeal and parfaits). And should you happen to over-imbibe at Kane Tiki Bar or Quinn’s (another fun spot for cocktails), the Bloody Mary Bar has hot sauces, bacon, olives and pickled vegetables to add to your mix.

Fifth Avenue is Naples’ main restaurant row but there’s another charming little strip, Third Street South, which also has good places to eat. One such spot is the see-and-be-seen Sea Salt, known for its contemporary seafood dishes such as crispy whole hogfish with broccolini and ricotta gnocchi, and seared scallops with shaved fennel and burnt orange puree. And as the name implies, sea salt is integral to the cuisine, in fact, more than 100 different types of salt (pink Himalayan, red Hawaiian, etc.) are used by the kitchen staff (you can sample some, as each table has a trio of salts alongside the bread and olive oil). And be sure to try its signature drinks, the Naples Sidebar and the Sea Salt Sidebar.

For a taste of Old Naples, head to the Dock at Crayton Cove, a beloved local institution overlooking Naples Bay in the historic Crayton Cove section of downtown. Sit outside on the pleasant patio and savor the dishes that emphasize Caribbean and Latin flavors. You’ll find everything from Jamaican jerk chicken and Cuban sandwiches to Bahamian conch fritters and pineapple Chilean sea bass. And do not miss the key lime pie – it was the best I’ve had in a long while.

Things to do in Naples, Florida, and Marco Island

Any list of things to do in Naples, Florida should include  a visit to the beach, and there a few in the downtown area, one at the western end of Fifth Avenue and the other at the western end of Twelfth Avenue. The latter is famous for its old wooden pier, which dates from 1888 and extends far into the waters of the Gulf. Sunset is a magical time to take a stroll – you’ll pass plenty of fishermen along the way (you can try your hand as well, no license is required) and you might even spot a dolphin. There is also a farmers market that takes place every Saturday morning and is definitely worth checking out. You’ll find dozens of vendors selling locally grown produce like carambolas (starfruit), oranges, canistels and mangoes, as well as tasty treats like chocolate-dipped key lime pie on a stick (yes, it’s as good as it sounds!).

Culture-wise, there is the Artis-Baker complex, comprised of the Naples Philharmonic, which attracts world-class talent (I had the pleasure of seeing violin virtuoso Joshua Bell during my visit) and the three-story Baker Museum, which, in addition to a permanent collection, mounts numerous exhibitions in its lower galleries. Until May 3, you can see the “Robert Indiana: Now and Then” exhibit, showcasing more than 50 pieces of art from the American pop artist who created the iconic LOVE work. There are also three installations from glass artist Dale Chihuly throughout the museum.

While the beaches on Marco Island are indeed spectacular, you’ll definitely want to get out on the water. At Rose Marina you can take a three-hour eco-tour aboard the Dolphin Explorer, a 30-foot catamaran, where a naturalist will point out dolphins in the Gulf and its estuaries. You’ll also stop on a barrier island (where loggerhead turtle nests are often sighted) to pick up a few seashells. On my cruise, I think we saw four or five dolphins – some just feet from the boat.

The Everglades, with its unique eco-systems, make for a great day trip from Naples. You can take an exhilarating airboat ride through the sawgrasses and mangroves with Wooten’s Everglades Airboat Tours just outside the national park – the captain will point out the local flora and fauna. On my trip, we saw white pelicans, roseate spoonbills and bald eagles. Also within Wooten’s is an alligator farm, to see these creatures up close is at once terrifying and breathtaking. Stick around for the alligator show where a professional handler will get in a cage with an enormous gator and share his knowledge about these animals’ lives, then proceed to poke and prod the beast and somehow manage to keep his fingers intact. And, if you’re so inclined, you can even pet a baby alligator and have your photo taken with it. Wooten’s is not far from the aforementioned City Seafood so be sure to stop there for lunch before heading back to Naples.

Have enjoyed any of these things to do in Naples, Florida or Marco Island before? Tell us your favorite memory from the trip in the comments below, and get your next Florida getaway started by visiting AAA.com/Travel.