Weird Things to Do in NYC & Nearby

Weird can be good! From odd museums to novel roadside stops, these attractions are unusual in the best way.

1 COMMENTS
Day Trips » Weird Things to Do in NYC & Nearby 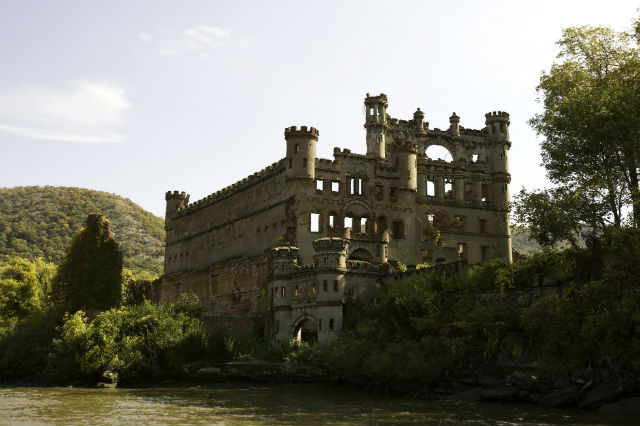 Outside of the typical, heavily-hyped and more glamorous attractions, there are quite a few of what some may consider weird things to do in NYC. But weird can be good.

Some of the most captivating stories are hidden in plain sight; you just need to know where to look.

Weird Things to Do in NYC

More commonly known as Bannerman Island, Pollepel Island in the Hudson River appears from a distance like a vision from a fairy tale. Above the trees, Bannerman Castle looms, the hauntingly striking shell of a long-abandoned military surplus warehouse.

In the early 1900s, Francis Bannerman, who made a business of buying and selling war equipment and ammunition, purchased the island and built the Scottish-style castle, which he used as an arsenal and summer home. But after his death, the land and castle slowly began to crumble. A 1969 fire significantly damaged the structure and in 2009 a partial collapse altered its appearance even more.

The Bannerman Castle Trust is a not-for-profit organization that has been working with the New York State Office of Parks, Recreation and Historic Preservation to restore and preserve the island and castle, and beautifies the property with gardens. From May through October, boat, kayak and self-guided walking tours are available to the public.

Preserved in time directly beneath City Hall, this retired 1904 subway station is a remarkable remnant from the transit system’s past. Unmatched by the purely functional, not-so-pretty stations of today, its chandeliers, skylights and Guastavino tile vaulted ceilings speak of a time when style and aesthetics were considered alongside utility. Unfortunately, as the New York Subway system grew, commuters opted in favor of efficiency and the stop was closed in 1940.

Although the train does not let out at City Hall, the station can be seen on the downtown 6 train, which loops through as it transitions from the downtown platform to head back uptown (ask your conductor if you can stay on board for the trip.) Tours are available to members of the New York Transit Museum.

Eccentricity is ingrained in Coney Island culture, which is partly due to its deep-rooted history of sideshow entertainment. At Sideshows by the Seashore theater, visitors can witness burlesque and magic shows and a traditional ten-in-one continuous circus sideshow where you can see sword swallowers, fire eaters, contortionists and other unique acts, all produced in signature Coney Island style.

Although now a family-friendly residential area and home to a Cornell Tech campus, Roosevelt Island’s past looked much different. Once called Blackwell Island and later on “Welfare Island” (1921-1973), hospitals, asylums and prisons filled the landscape of the small plot in the middle of the East River from the early 1800s through the 20th century.

The island is only 2 miles long, but boasts six designated landmarks, several of which allude to its unusual history. The Octagon Tower, for example (now a fancy living complex), was once the central hall of New York’s first municipal asylum. But Roosevelt Island’s abandoned Smallpox Hospital is perhaps one of the eeriest things to see in New York. Known as “Renwick Ruin,” the hospital took turns as a city hospital and nursing school before it was closed in 1950. It is the only landmark ruin in the state.

Getting to Roosevelt Island is an adventure in itself. The Roosevelt Island Tramway takes passengers on a five-minute ride across the river from a station at 59th street and Second Avenue. It is the first of only two commuter aerial trams in North America.

Find and book a hotel with AAA in and near NYC.

Housed in a former freight elevator in Tribeca, the tiny Mmuseumm describes itself as “a modern natural history museum dedicated to the curation and exhibition of contemporary artifacts that illustrate and humanize the complexities of the modern world.” In other words, it showcases everyday objects in a way that is designed to make you think. Previous exhibits have included “Objects Removed From People’s Bodies” and “The Cornflake Taxonomy.”

Mmuseumm is visible 24/7 and can also be scheduled for private visits. Curious passersby can call the number posted on the front door for a toll-free audio guide of current exhibits.

Ripley’s Believe it or Not Times Square

If you’ve got a penchant for the peculiar, you will find it at Ripley’s Believe It or Not Times Square.

The museum’s “Odditorium” features over 20 themed galleries and interactive exhibits that appeal to the curious side of all of us, featuring collections of stories, artifacts and people so odd and extraordinary that, like the name says, you must see to believe – or not.

Smack dab among all the blinking lights of Times Square, the attraction is a fun place to spend a few hours. Save over 30% with tickets purchased in advance online with AAA.

On the way to the Hamptons on Route 24, the Big Duck in Flanders is hard to miss and hard to pass by. Standing at 20 feet tall and 30 feet long, the duck-shaped building was originally built in 1931 by a Riverhead farmer who sold ducks and eggs from the shop within. Today, the ultra-photogenic roadside attraction is listed on the National Register of Historic Places. Stop into the gift shop, which sells duck memorabilia and trinkets, and serves as a rest stop with tourist information and clean bathrooms. It’s open year-round, but it’s recommended that you call before you go (631-832-3377).

Find and book a hotel with AAA in the Hamptons.

Among the Emerson Country Stores in Mount Tremper, just a short distance from Woodstock, a 60-foot grain silo converted into the World’s Largest Kaleidoscope (Guinness World Records-approved) treats travelers to an unforgettable and unique psychedelic experience. Inside the small darkened room, visitors either lay on the floor or on tilted boards and watch as a constantly shifting set of colors and shapes set to music dances above them. Next door, the Kaleidostore has a variety of kaleidoscopes for purchase.

Find and book a hotel with AAA near Woodstock.

Do you dream of having a small wedding? It can’t get much smaller than this. At about 29 square feet, this tiny chapel in Oneida claims to be the “World’s Smallest Church” and only has enough room for a bride, groom and officiant. Plus, it sits in the middle of a pond, so be ready to row! The sign out front tells you all you need to know about the little church, which is non-denominational, including its availability for special occasions and meditation.

Yes, weird is good. Some of New York’s oddest places show the greatest character and reveal the most interesting history. Now that you know where to find them, go out and explore!

What’s your favorite odd attraction? Tell us in the comments.

One Thought on “Weird Things to Do in NYC & Nearby”