From Cape Cod to the Jersey Shore, we've found the raddest surfing destinations to hang 10 this summer. 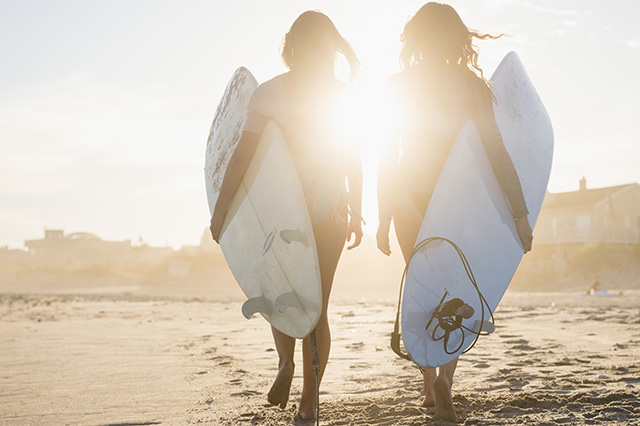 Hawaii and California may get more of the pipeline glory, but people have been surfing the waters off New England, New York and New Jersey since local lifeguards brought longboards back from the West Coast back in the early 1960s.  Diehards will tell you the best waves arrive with winter storms, with wetsuits a must in the chilly waters, but you can catch a decent swell almost any time of year at these Northeast surfing destinations.

Narragansett Pier is longboard heaven, with surfers lining up in the shadow of this beach town’s iconic Towers to catch the long offshore break rolling in toward the seawall at Narragansett Town Beach. The area around the Point Judith Lighthouse and nearby Matunuck in South Kingstown are other popular surfing destinations.

Where to stay: The Break Hotel not only has a vintage surfing vibe but is also close to one of the best reef breaks in the Northeast.

Where to hang loose: Fuel up for a day on the waves with breakfast at Crazy Burger, chill out at sunset with a cocktail at Chair 5, the rooftop bar at The Break, then catch some live music at the Bon Vue Inn.

Where to gear up: Narragansett Surf & Skate has surfboards, accessories, swimwear and lessons by Peter “Pan” Panagiotis, who has been surfing Rhode Island’s waters since the “Summer of Love.”

South-facing shores capture wind-driven surf on Newport’s Easton’s (First) Beach and nearby Middletown’s Sachuest (Second) Beach, while diehards challenge the waves below the mansion-lined Cliff Walk at spots like Ruggles and Bailey’s Beach.

Where to stay: The Atlantic Beach Hotel is just steps from the surf, while the Sea Breeze Inn is a laid-back alternative for those traveling on a surf bum’s budget.

Where to hang loose: Located within walking distance of Easton’s Beach, Rejects Beer Co. is named for Newport’s famous locals’ beach and has a counterculture vibe to go along with on-site brewed stouts, ales and Twelve O’Clock High, a classic New England-style IPA.

Where to gear up: Local surf legend Sid Abruzzi has been setting up surfers with boards, swimwear and more at Water Brothers since 1971. Rhody Surf offers private surfing lessons and summer surf camps on Easton’s Beach.

Known as Four Mile to local surfers, White Crest Beach in Wellfleet takes a little effort (namely climbing up and down dunes) to reach, but the reward is the best surfing on the Cape, with sandbars providing good wave breaks for both longboarders and shortboards. But you can surf almost anywhere on the ocean-facing side of the Outer Cape, from Nauset Beach in Orleans to Head of the Meadow Beach in Truro. Just mind the sharks, which seem to be making the Cape waters in greater numbers in recent years.

Where to stay: The Four Diamond Ocean Edge Resort & Golf Club is one of the Cape’s poshest resorts and close to White Crest Beach in Wellfleet.

Where to hang loose: The Beachcomber in Wellfleet is a toes-in-the-sand bar that’s close to the surfing beaches.

Where to gear up: The Pump House Surf Shop in Orleans has hordes of boards  – surfboards, stand-up paddleboards, skateboards, skim boards and more.

The birthplace of East Coast surfing, Montauk has evolved from a sleepy fishing village to a trendy weekend destination but still attracts surfers to take-off spots at Turtles (right below the lighthouse), Ditch Plains for longboard action, and Terrace with its reef-generated waves. Fall can be the sweet spot for a surfing road trip to Montauk, with the Hamptons summer crowd seeking warmer shores, water temps still tolerable, and occasional big waves arriving with hurricane season.

Where to stay: The oceanfront boutique Marram Montauk resort sits amid the dunes at the Terrace surf beak and offers surfing lessons on its own stretch of beach from professional surfer and Montauk native Leif Engstrom.

Where to gear up: Sunset Surf Shack is a low-key surf shop a block off the beach in the heart of Montauk.

Maybe you don’t want to hitch a ride to Rockaway Beach like The Ramones suggested, but this may be the only surfing destination that you can reach by subway (take the A train). Surfing beaches are located between Beach 68th St. and Beach 71st St., Beach 87th and Beach 91st St., and Beach 110th and Beach 111th St.

Where to stay: The Rockaway Hotel has coast-inspired rooms with water views, a rooftop bar and a heated pool with cabanas, plus surf lockers and lessons from Locals Surf School.

Where to hang loose: The Rockaway Beach Surf Club has a surfer themed outdoor patio alongside the elevated subway line, craft cocktails and Mexican food.

Where to gear up: Choose from a stock of more than 200 surfboards at the Rockaway Beach Surf Shop, operated by surfboard shaper Tom Sena and his family for nearly half a century.

Snooki didn’t surf, but you’ll find surfers all along the Jersey Shore, including Seaside Heights. Hardcore surfers, however, are most likely to be found at Inlet Beach in Manasquan, a small beach town squeezed between Sea Girt and Point Pleasant. A jetty at the inlet helps intensify a long offshore break.

Where to stay: The Casa Del Mar, a boutique motel on the Point Pleasant side of the Manasquan Inlet, has newly renovated rooms and is within walking distance of the ocean, boardwalk and inlet.

Where to hang loose: Fresh coffee and breakfast, tapas for lunch and live music and late-night snacks are served up at a surf-themed Homegrown Coffee Bar & Surf Lounge.

Where to gear up: The Inlet Outlet Surf Shop sells both new and used boards.

Where’s your favorite surfing destination? Tell us in the comments! If you need some help deciding, check out our guide to the best Northeast beaches.

13 Thoughts on “Six Swell Surf Towns in the Northeast”