NYC TV and Movie Tour Is a Smash Hit 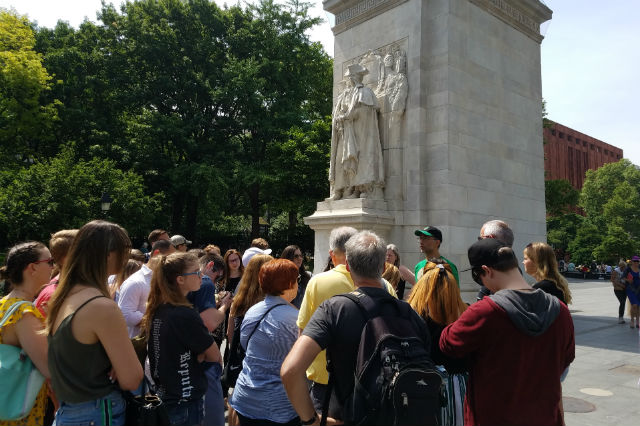 Out in the streets or re-created in the studio, filmmakers have always tried to capture the magic of New York City on screen. Whether it’s in the shadows of a dark alley, the grandeur of a skyscraper or the nonstop energy of Times Square, if you’ve got a camera, the Big Apple easily provides the lights and action.

The NYC TV and Movie Tour from On Location Tours takes visitors on a journey through Manhattan that covers over 60 of the most famous filming sites in the city. For first-time visitors and cinema buffs alike, it’s an entertaining look at historic landmarks and neighborhoods through the familiar lens of movies and television.

On Location Tours specializes in television and movie sightseeing tours in New York and Boston with themes like “Sex and the City” hotspots, “Sopranos” sites and Turner Classic Movies.

Sound like something you would like to do? AAA members save 15% on On Location Tours in New York City and Boston when booking in advance online.

I chose the NYC TV and Movie Tour because I felt like it was the most well-rounded option. The guide might have called me out for being the only person from the tri-state area on a bus packed with tourists from Utah all the way to Scotland, but the film-first perspective was a new way of seeing the city that I could appreciate. It was a really good time!

The 2.5-3-hour bus tour is a highlight reel of some of the top big and small screen moments captured throughout the city, plus a few extra surprises along the way. The perspective is unique in that Columbus Circle isn’t just a traffic circle but the place where the Stay Puft Marshmallow Man made his debut in “Ghostbusters,” and the Flatiron building is not only an architectural marvel but the Daily Bugle headquarters in “Spider-Man.”

For fans of shows like “Sex and the City,” “Friends,” “Seinfeld,” “How I Met Your Mother” and “Gossip Girl,” it’s an opportunity to see the stomping grounds of their favorite characters. You feel as if you are part of the shows as screens inside of the bus play scenes featuring the locations right outside the window.

All On Location Tours guides are actors, usually with backgrounds in comedy or improv – so the personalities are big and the commentary is quick, witty and never boring. As certified NYC tour guides, they not only provide facts about the filming locations, but can offer insight to some of the behind-the-scenes moviemaking magic as well.

Our guide Gary Mahmoud, an actor and comedian, would throw in mentions of his own cameos and roles throughout the tour. There was never a dull moment; even in traffic, he would keep the energy going with trivia questions and small prizes for those who got correct answers.

The trip started in Times Square, then up through Columbus Circle, past Central Park (the most filmed location in the world) and the swanky stores on Fifth Avenue. Some of the most iconic film sites included Trump Tower, aka Bruce Wayne/Batman’s office; the Plaza Hotel, famously remembered for its screen time in “Home Alone”; and Tiffany & Co., where Audrey Hepburn donned her black dress and pearls and ate breakfast.

After passing through the Flatiron District, we stopped to get out and take photos at the easily recognizable and movie-ready Washington Square Park. We continued on to Greenwich Village, Tribeca and the Meatpacking District, stopping along the way to check out the “Ghostbusters” firehouse and the building that inspired the “Friend’s” apartment.

There’s a good chance that you’ll get to see some real-life lights, camera, action on the tour, too. We happened to drive past actresses Ellie Kemper and Carol Kane as they were shooting a scene for the Netflix series “Unbreakable Kimmy Schmidt.” Gary shared a long list of TV shows, movies and actors he’s spotted while guiding tours. Stay alert and you’ll never know what or who you might see!

The NYC TV and Movie Tour wraps up in midtown right outside of McGee’s Pub, said to be the inspiration for MacLaren’s in “How I Met Your Mother.” And right around the corner is the original Soup Nazi shop for all the “Seinfeld” fans.

The reviews are in!

On Locations Tours is a crowd pleaser. It’s got 4.5 out of 5 stars on Yelp, and I can attest to the fact that everyone on my tour (including me!) walked away with a smile on their face.

If you’re a TV and movie lover or are just looking for a fun way to spend a day out in the city, you’ll enjoy any of the tours offered by On Location Tours. Don’t forget your AAA discount!