The Times Square Ball Drop: What You Need to Know

Are you planning on watching the Times Square ball drop? Whether you plan to see it in person or on TV, here are the facts you need to know.

8 COMMENTS
Day Trips » The Times Square Ball Drop: What You Need to Know 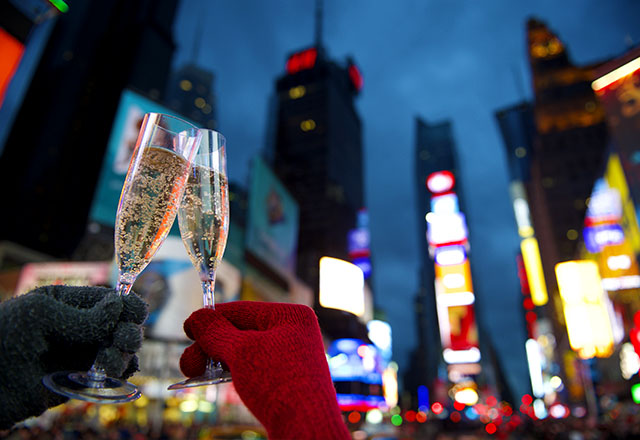 The Times Square ball drop is a beloved New York tradition – and seeing it in person is a popular bucket list item. So popular, in fact, that an estimated 2 million people will attend. Or at least try to attend. You can see the ball drop from side streets or adjacent buildings if you’re lucky, but only about 120,000 people can actually fit on the ground in Times Square. So if you’re planning on going, you should go early.

The Times Square ball drop tradition began in December of 1907 atop One Times Square. The first ball was about five feet in diameter, made of iron and wood. To make it glow, it was covered in 100 incandescent light bulbs. They even had their own version of cheesy New Year’s Eve props – nearby restaurants passed out top hats adorned with tiny, battery-powered lightbulbs. When you turned the hats on, the lights read “1908.”

Since then, there have been 7 different versions of the Times Square ball. The 2007-2008 ball was only used once – to celebrate the 100-year anniversary of the ball drop.

As of 2019, the ball has been lowered 109 times. That’s every year except 1942 and 1943, when a wartime dimout was in effect. People still gathered in Times Square those years to greet the New Year in a moment of reverent silence, followed by the ringing of bells.

The current ball rests atop One Times Square year-round. At 12 feet in diameter, it’s twice the size of the last ball. It’s also enormously heavy, weighing in at 11,875 pounds. The ball is actually a geodesic sphere, made up of interlocking triangles (think Disney’s Epcot ball). It’s covered in 2,688 custom Waterford crystals, which are attached to 675 LED modules. That’s 32,256 LEDs in total. With the LEDs, the ball can change colors and patterns, appearing almost like a giant kaleidoscope.

Over 1 billion people will watch the Times Square ball drop around the world, over television broadcasts or streaming services. It remains a New Year’s Eve tradition even to people who live in other time zones.

As mentioned earlier, it gets very crowded in and around Times Square on the day of the ball drop, so if you plan on attending, you should arrive as early as possible.

In recent years, security has tightened around the event. Attendees can enter Times Square through police-defined entry points, where they might be scanned with magnetometers or sniffed by explosive-detecting K-9 units. Afterward, they’ll be escorted to one of several pens throughout Times Square, where they will be expected to stay until after the ball drop. The event prohibits large bags, umbrellas and alcohol. The alcohol ban is probably for the best, since there are no Porta-Potties in Times Square. Don’t plan on sneaking into the Europa Cafe bathroom, either – Times Square storefronts are notoriously unwelcoming to New Year’s Eve revelers seeking potty breaks. Besides, you probably won’t be able to get back in your pen afterward.

Pack some snacks (you won’t be able to get food once you’re in your spot) and wear comfortable shoes. You will be standing for the entire event, since it’s against the rules to sit down on the ground. Bundle up in layers so that you’re prepared for any kind of weather. The 2017-2018 celebration was the second-coldest in the history of the ball drop, coming in at 9 degrees Fahrenheit (with a wind chill of -4).

If you don’t want to deal with the crazy crowds on the ground, then you can attend one of the many parties at the hotels and restaurants around Times Square. The Times Square website even has a schedule you can take a look at. Some (okay, MOST) of these parties are incredibly expensive. We’re talking $1000+ expensive.

After the ball drops, the confetti falls and the performers pack up, there’s over 50 tons of garbage left behind in Times Square. After 2017-2018, it took 294 sanitation workers to clean it up, and that was probably the cleanest Times Square looked all year.

Since the days of auld lang syne, the Times Square ball drop has remained a once-in-a-lifetime experience, and a beautiful New York tradition. Why don’t you see it for yourself this year?

Have you ever attended the Times Square ball drop? Do you want to? Let us know in the comments below!

Check out the AAA NYC travel guide for more fun things to see and do in the area. Start planning your next trip with AAA Travel today!

8 Thoughts on “The Times Square Ball Drop: What You Need to Know”