Visiting the Otherworldly Landscape of Valley of Fire State Park 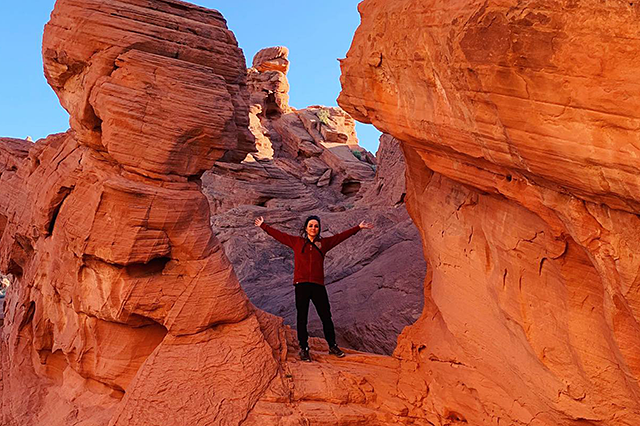 Driving through the Valley of Fire State Park, I felt like I was being transported to Mars. Named for red sandstone formations that rise like huge castles in the air, the gargantuan rocks date to prehistoric times.

As an East Coaster, visiting this desert region in Nevada gave me a new appreciation for this part of the U.S. and its unique terrain.

My trip happened on a whim. I was in Utah for business with my sister, getting ready to head to the Las Vegas airport for the trip home to New York City. Never ones to shy away from an adventure, we wanted to make the most of the time we had available. Glancing at the map, we chose Valley of Fire because, well, it’s called Valley of Fire, and because it was only an hour northeast of Las Vegas.

Visitors to the park have the option to enter through two different entrances on the east or west sides.  We drove though Overton, Nev., to the east entrance. Overton has a population of about 4,000 with a small downtown area and a main street. As we wound around the town and followed the signs for Valley of Fire, the road started to become more and more desolate and the terrain more desert-like. As we approached the outskirts of the park, the huge red rock formation began to appear and surround us. We were on Mars.

We were in the information center when a woman began calling to her husband. Just outside the door we saw a small heard of Desert bighorn sheep grazing on the side of the mountain, maybe just 100 feet away. While it may be surprising, life continues to bloom and thrive in the Valley of Fire.

A complex geologic process of shifting sand dunes, wind and erosion forged the Valley of Fire more than 150 million years ago. It’s hard to imagine the desolate area was once inhabited. Archeologists estimate that people started living there around 300 B.C., with Anasazi Pueblo farmers living there until about 1150 A.D. You can still see evidence of the ancient people in their artistic petroglyphs right up close in the park today.

The area was “rediscovered” in 1912 when prospectors created the Arrowhead Trail, which ran from Salt Lake City to L.A. and ran right through the Valley of Fire. One popular story from the 1920s claims that the park got its name from a AAA official who was traveling though at sunset. Looking around in awe, he said that the entire rocky vista looked like it was on fire. The name stuck, and today the park is comprised of 42,000 protected acres.

Apparently, we’re not the only ones struck by the park’s unique setting. It’s a popular location for car commercials and movies. It was used in the Mars scenes in “Total Recall” and in “Star Trek Generations.” And, of course, today’s Instagram audience has taken to posting Insta-shots of the paved roads weaving through acres of the red rock formations.

Scenic roads throughout the park connect to the visitor center and several trails and picnic areas. We traveled in March when the weather was temperate, just warm enough to wear shorts and with just enough people to make us feel like we weren’t really lost in another world. During the summer months be sure to plan your exploration accordingly (bring water!) as the average temperature is about 100 degrees and can climb even higher.

We started at the trail around Mouse’s Tank, also known as Petroglyph Canyon. The tank is a naturally formed basin that collects water after the rare periods of rainfall. It’s named after Little Mouse, a Southern Paiute Indian accused of murdering two prospectors in the 1890s. We were surprised to see many distinctly etched petroglyphs (the kind we previously only saw in textbooks) right at eye level. Living in New York City for too long, I initially thought someone had just spray-painted them on the rocks; but they are indeed from prehistoric times.

Next, we drove to the Rainbow Vista trail, which has postcard-perfect panoramic views of multicolored sandstone. After this trail and a lot of photos we decided to drive around the White Domes area. This road weaves around 5.5 miles of the most incredible views of sandstone formations. During the 20-minute drive there were three separate parking areas to pull off and take in the view.

If you go, make sure to bring a GoPro for the dashboard – the combination of weaving roads and rainbow rocks is truly time-lapse worthy.

Check out some of Katie’s favorite travel gadgets.

Have you ever been to Valley of Fire State Park? Would you like to visit after reading this post? Tell us in the comments!

— Katie Linendoll is a journalist and TV host who specializes in reporting on technology and gadgets.