We compare and contrast ocean and river cruise accommodations. 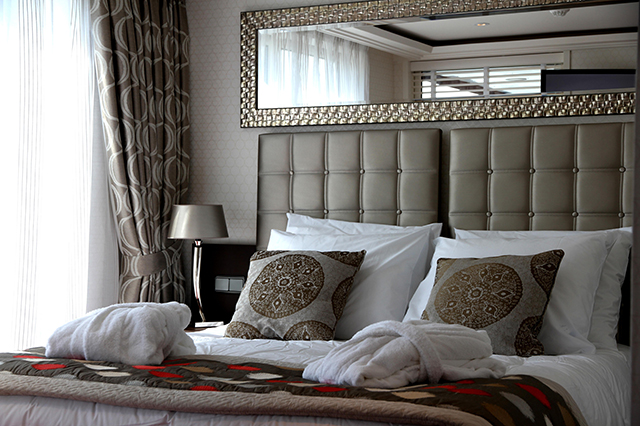 I’ve been on both types of cruises over the years and stayed in a variety of cabin types, and more than anything else, I love being able to enjoy fresh air in my cabin, so a window that opens on a river cruise or having a balcony on an ocean cruise, is a key part of my decision in booking staterooms.

Here’s a look at the various cruise line differences between rooms in ocean and river cruises to help you plan ahead for your next voyage at sea.

On river cruise ships, staterooms typically come in four categories, including cabins with small windows (that don’t open), cabins with full-size windows (that don’t open), staterooms with some sort of balcony – be it a “French” balcony, which means a large window opens, making the room feel like it has a balcony, to suites with full balconies. Generally, a “suite” on a river cruise just means it has more square footage, not that it has separate sleeping and living quarters.

Of course, every year, new ships are built and more and more features and categories are created. Some river cruise lines offer cabins with full-size panoramic windows that slide open all the way, making cabins feels much larger.

Ocean liners have a larger variety of cabin types on offer, but generally there are inside cabins (with no windows), ocean-view cabins (with a window), balcony staterooms and suites that range anywhere from one-bedroom suites to extravagantly sized two-story affairs with private balconies and over-the-top amenities like hot tubs and pianos.

Considering that ocean cruise lines have so many more passengers, in the thousands, rather than less than the 200 or so on a river cruise, the size of your cabin may be an important factor for you, especially if you need some downtime.

On ocean-going vessels, many cabins or suites can accommodate three or four people, making them ideal for families or larger parties. On river cruise lines, cabins are generally designed for double occupancy, or even single occupancy (only available on some ships). Pull-out couches and upper berths are just not available on river cruises and truthfully, these cruises tend to be more adult-focused.

The word “balcony” on a river cruise ship has so many different meanings that it is easy to get confused. Most of these so-called balconies are “French” balconies, which means they are floor-to-ceiling sliding glass doors that open to a railing. Some cruise lines may actually have a narrow deck, while other lines boast large suites with private walk-out balconies. One of the most decipherable cruise line differences is that on ocean cruises, a balcony is a balcony, usually outfitted with a table and a couple of chairs or lounge chairs.

It can be helpful to look at a cruise line comparison of what river cruise cabins look like up against ocean cruise line cabins.

AmaWaterways, which offers river cruises in Europe, Asia and Africa, has generously sized standard cabins. On one of its typical ships, such as the AmaCello, there are 73 standard staterooms with 170 square feet; four suites, which are 225 square feet; and two single cabins, with 140 square feet. Most have French balconies and marble bathrooms with showers which feel quite luxurious.

Royal Caribbean Cruises, which sail all over the world, has a fleet of ships. On the Mariner of the Seas, a standard balcony stateroom ranges in size from 184 to 199 square feet, with a 50- to 65-square-foot balcony. There are also inside cabins and ocean view cabins. Suites range in size from about 300 square feet to the astonishingly large 1,325-square-foot Royal Suite (the only one on board). This suite features a living room with a wet bar, dining table, entertainment center, piano, and a separate bedroom with a king bed and its own balcony. The bathroom boasts a whirlpool tub.

Often passengers who book suites get extra perks, from early boarding to Champagne in their cabin upon arrival. Other examples might be invitations to dine with the captain, exclusive cocktail receptions, priority choice of dinner reservations and first pick at excursions. It’s important to figure out what’s important to you as a cruiser as you plan your trip, after you decide where to go, that is!

There are quite a few cruise line differences when it comes to rooms in ocean cruises vs. river cruises. Which do you prefer? Tell us in the comments. 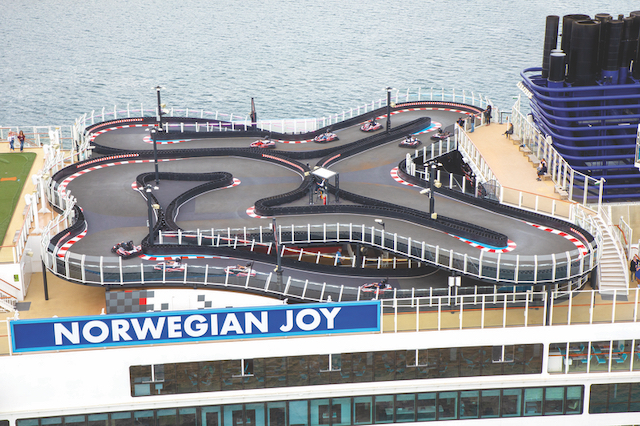 Why a Norwegian Cruise Should Be on Your Itinerary

Jump aboard the Norwegian Joy as it sails to the one-of-a-kind destination of Bermuda.