Looking for a kid-friendly cruise that also keeps the adults happy and entertained? A Disney cruise has something for everyone. 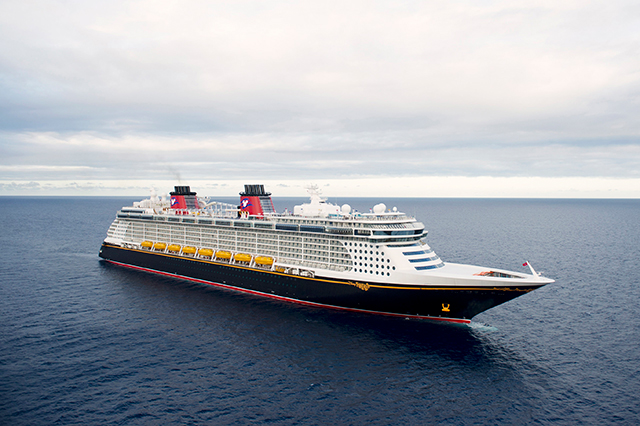 When it comes to family-friendly vacations, a trip to Disney is truly magical. For those that love all things Mickey, but also want to explore destinations beyond the Magic Kingdom, a Walt Disney Cruise gives you the best of both worlds.

The Magic and Dream are decorated in an Art Deco style, while the Wonder and Fantasy feature an Art Nouveau design.

There is plenty of kid-friendly entertainment, including Broadway-caliber live musicals. Starting in November 2017, the Dream will host a musical production of Beauty and the Beast. The Wonder is home to Frozen, A Musical Spectacular, while the Magic showcases Tangled: The Musical and the Fantasy has Aladdin, A Musical Spectacular.

And why should the kids have all the fun? Mom and dad can take advantage of free babysitting at the Kids Club and hit up one of the adult-only nightclubs and lounges.

The Disney Cruise Line visits various ports of call in Alaska, Europe and the Caribbean. Those traveling to the Bahamas, Western and Eastern Caribbean will also have access to Castaway Cay, Disney’s very own private island. There, guests can spend the day relaxing on pristine beaches, snorkel in its sparkling lagoons filled with sea life, splash around in play areas, take in the scenic walking trails and dine at one of the open-air BBQ dining locations.

For families that want to spend some time at Disney World, many cruises leaving from Port Canaveral combine a stay at the parks with your time at sea. Other U.S.-based departure cities include Miami, Galveston, Texas and San Diego. In addition, the company does offer cruises leaving from New York City, usually in the fall. For example, Disney Magic will be sailing to both Bermuda and Quebec City for the first time in late 2018, with the trips leaving from NYC and taking place on the Disney Magic. The Magic will also take a special trip from New York to Port Canaveral in late 2018.

And there are specialty cruises for Star Wars and Marvel super fans, as well as Halloween on the High Seas (September and October) and Very Merrytime Cruises (November and December).

Of course, the ships are packed with all of your favorite Disney characters that make these especially kid-friendly cruises: Mickey Mouse, Minnie Mouse, Cinderella, Captain Hook and more. Your little princess can have royal tea with some of the Disney princesses, and there is a pirate night featuring a scallywag-themed dinner and buccaneer bash that ends with an amazing fireworks show. And on select seven-night or longer cruises, there is a special character breakfast – an easy way to meet and snap photos with an array of characters.

One of the biggest perks of cruising is the food. Disney cruises offers everything from gourmet dining to quick-service meals. There are also late-night snacks in the adult nightclubs and lounges, as well as all-you-can-eat ice cream, so even your pickiest eaters will end the day with a full stomach!

This is a vacation, so you want some time for rest and relaxation. Each ship has a Senses Spa & Salon, where you can get a spa or beauty treatment. For the teen in your life, the Chill Spa offers treatments designed specifically for kids ages 13-17 – including mother/daughter and father/son treatments.

And little girls can have their princess fantasies come true at the Bibbidi Bobbidi Boutique on the Fantasy.

The cost of a Disney cruise really depends on the type of cruise. Obviously, the more nights you’re on the ship, the more it will cost you. Typically, the cruise cost starts at $2500 for a family of four, and includes room, food, entertainment, and on-board activities (not the spa/salon). Airfare and excursions are not included.

Disney offers special rates for Florida residents and U.S. military members, and there are sometimes deals offered to Canadian residents and Southern California residents. In addition, there are often deals depending on the time of year and type of cruise booked. Check out AAA.com/Disney to find offers for AAA members.

If you’re on a Disney cruise and love it so much you know you want to take another one within the next 24 months, be sure to book your next voyage while you’re on the ship. You’ll receive a 10 percent discount on the final cruise fare (with some blackout dates; does not apply to concierge bookings; up to $200 onboard credit per stateroom ($100 for 3-6 night cruises, $200 for 7+ night cruises); and a lower deposit requirement of only 10 percent on 7+ night cruises (regular deposit requirement is 20 percent).

You can book a “placeholder” cruise for $250 without picking a specific sail date and change or cancel it later with no penalty.

Have you ever gone on a magical Disney cruise? Tell us about it.