Want to play where the pros play? These golf courses have all hosted the PGA Championship. 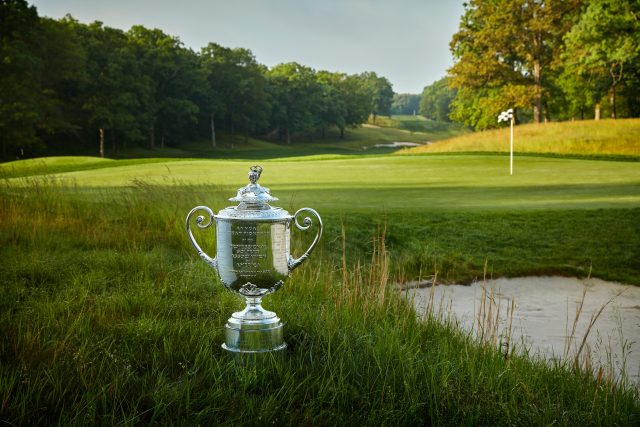 The PGA Championship, one of professional golf’s four majors, has been played at many of America’s great golf courses. Fortunately, many of the courses are located in the Northeast. In fact, it has been held in the State of New York 12 times, more than any other state. Here are some of the top local PGA Championship Golf Courses, including a few that are open to the public.

About an hour drive north of Manhattan lies the Winged Foot Golf Club. It was established in 1923 and has hosted several major golf events, including the 1997 PGA Championship. The club consists of two courses, but it’s the West Course that consistently ranks as one of the top golf courses in the country.

In recent years, Winged Foot has embarked on an unprecedented project to improve the golf courses. For that, they called upon Gil Hanse, the preeminent architect of his generation. The clubhouse, built in a Tudor architectural style, also received a renovation.

There are five 18-hole regulation golf courses at Bethpage State Park. The Black course is the most difficult. In 2002, it became the first public course to host the U.S. Open, which returned in 2009. In 2019, it welcomed the PGA Championship for the first time, becoming one of the few public golf courses to have held the event.

Built in 1936 as part of the Depression Era public-works project, the Black Course was designed by famed golf architect A.W. Tillinghast. The course conditions today, however, are largely a product of a major restoration led by architect Rees Jones ahead of the 2002 Open.

Bethpage Black is noted for being one of the most difficult courses in the country, putting every shot to the test. After competing there in 2016, then two-time major champion Jordan Spieth said, “The course is up there with the hardest, probably, top five courses I’ve ever played in my life.”

For those looking for an opportunity to play on a world-class course, this may just be your best opportunity. Not only is it open to the public, but because it’s operated by a government agency (the New York State Parks Department), it offers very reasonable fees for a course of its caliber.

Nestled right along the Delaware River – just across the way from northern New Jersey – is the Shawnee Inn & Golf Resort. Back in 1938, the golf world descended on this picturesque resort when its golf course became the setting for that year’s PGA Championship. Nowadays, guests of the resort and the general public are free to go for a round.

The course was the first to be designed by the renowned architect A.W. Tillinghast, who would go one to work on more than 260 courses. Shawnee is classically designed and uniquely flat compared to other courses in the surrounding Pocono Mountains. Another distinction is that 24 of its 27 holes are located on an island in the Delaware River.

The par-69 course at Wannamoisett Country Club was built in 1914 before hosting the PGA Championship in 1931. Wannamoisett is known as a challenging course to maneuver. It’s built on less than 100 acres but is filled with bunkers and small greens. The fairways are lined with very thick rough and the large, rolling greens are difficult to read.

Members of the club recently invested $3 million in improvements of the golf course. This investment created improved playability for golfers of all skill sets, including the installation of a state-of-the-art computerized irrigation system, the rehabilitation of bunkers and the addition of new forward and back tees.

The Baltusrol Golf Club is supplanted at the base of the Baltusrol Mountains in northern New Jersey. It consists of two 18-hole courses – the upper and the lower – but it is the lower course that held the 2005 and 2016 PGA Championship.

Built in 1922, the par-72 course is spread out over rolling parkland. Ponds and other man-made and natural hazards come into play. The course has undergone small renovations over recent years, including minor adjustments to several greens, the lengthening of holes from the tee and re-positioning or adding bunkers.

About 30 minutes south of Boston sits Canton, Mass., home of the Blue Hill Country Club. Blue Hill held the PGA Championship back in 1956.

The Championship Course was designed in 1925 and restored by renowned designer Ron Prichard in 2003. With its tree-lined fairways and lush rolling terrain, this par-72 course remains as picturesque as ever.

The Salisbury Golf Club in East Meadow, N.Y., was a prominent golf and social club in the early 1900s. It consisted of five 18-hole courses. But during the Great Depression, the club couldn’t pay its taxes and Nassau County took over the property. It has since been renamed Eisenhower Park and has three courses: Blue, Red and White. The Red Course is the only original course remaining from the Salisbury Golf Club. It also happens to be the course on which Hall-of-Famer Walter Hagen won the 1926 PGA Championship.

While it may not be widely considered among the top courses in the Northeast, Eisenhower Park is open to the public, guaranteeing every golf enthusiast a chance to hit the links where the pros have played.

Have you played any of these courses? How was the experience? Let us know in the comments below.

If you’re thinking about taking a road trip to one of these golf destinations, plan your getaway with AAA.

Check out these 12 spots for a Northeast golf getaway.

2 Thoughts on “8 PGA Championship Golf Courses in the Northeast”