The ski capital of the East has a lot more to offer than just fresh powder. 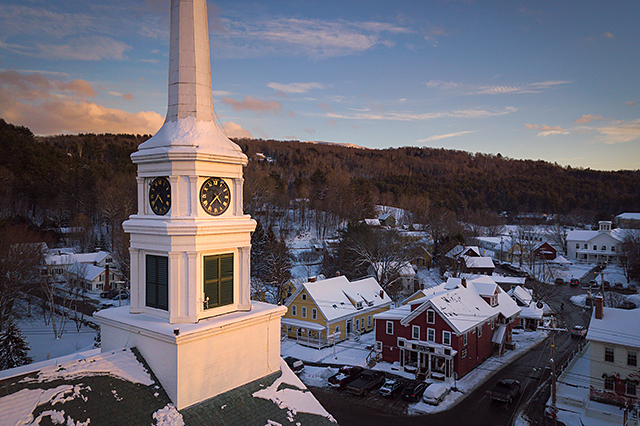 There’s no debating that New England’s most serious skiers head to Vermont when the temperatures drop. While there are many places in the state to challenge your skills on the slopes, there’s no place quite like Stowe, Vt. This quintessentially New England town is full of old-fashioned charm, but it’s also a place where forward-thinking people are creating some of the region’s best food and drink. Here’s how to spend a weekend in Stowe, Vt., whether you’re skiing or not.

Things to Do in Stowe, Vt. – Only-in-Winter

There are two types of New Englanders in winter: those who book cruises while they dream of the return of beach weather, and those who bundle up and dive into the season. Stowe definitely makes it easy to enjoy the cold.

In January, the town celebrates winter with two signature events. Stowe’s Winter Carnival has been happening for 45 years, and takes place Jan. 23-26. Artists carve ice sculptures in the streets, kids have their own “carnival chaos” party, and brave souls compete in snow volleyball and snow golf tournaments. The Winter Rendezvous, Jan. 22-26, is an LGBTQ pride celebration that happens in conjunction with the carnival, and is full of dance parties, drag shows and bonfires. Feb. 23 sees the 75th return of the Stowe Derby, a cross-country ski race that draws competitors from the U.S. Ski Team.

When you first arrive for your weekend in Stowe, Vt., any local you meet will let you in on the area’s most precious natural resource: the beers coming out of The Alchemist Brewery. The brewery specializes in fresh, unfiltered IPAs which, until recently, were only available in a small radius around Stowe and Waterbury to preserve the beer’s freshness. Now, you can get the signature Heady Topper IPA around Vermont, but the commitment to freshness is so strong that the “where to find” section on The Alchemist’s website specifies which day the beer is delivered to which place.

Stowe is also home to two more of Vermont’s 50 craft breweries: Idletyme Brewing Company and von Trapp Brewing, as well as Stowe Cider, which has 24 craft ciders on tap and has live music at the taproom on Friday and Saturday evenings. As always, remember to enjoy responsibly and designate a sober driver.

But all that tasting is going to make you hungry. Stowe has endless food options, like the mammoth burgers at Blue Donkey. Plate serves California-inspired New England fare, The Bistro at Ten Acres makes everything (even the mustard) from scratch, and Harrison’s Restaurant serves heartwarming comfort food by its fireplace. Solstice, at Spruce Peak, is AAA Four Diamond Rated for its fine dining.

But then, there’s also the food you can take home with you. The sheer volume of straight-from-the-farm food in Vermont can be overwhelming, but you can get a good sampling of what the state has to offer at Stowe Mercantile, a country store with hundreds upon hundreds of Vermont-made candy, cheese, beer, and baked goods, including its own line from Stowe Mercantile Kitchen. Stowe Kitchen offers weekend cooking classes focusing on everything from crafting a winter brunch spread to making ramen and sushi.

You definitely won’t be the first person to joke that “the hills are alive” when you get to Trapp Family Lodge, but considering the hotel is where the von Trapp family (as in, “The Sound of Music” von Trapps) landed when they left Austria, you can hardly be blamed for your enthusiasm. This European-style resort has three restaurants, including the Bierhall, which serves Austrian food, and activities like baking classes, skiing lessons and snowshoe expeditions. Book now.

At Stoweflake Mountain Resort & Spa, there’s a lot less Alps and a lot more Green Mountains, like in the hydrotherapy spa, which has an aqua solarium overlooking the Mount Mansfield (the tallest peak in the state) with a waterfall pool modeled after Bingham Falls, and a mineral soaking pool. In season, the hotel offers hot air balloon rides over the property and golfing at the attached golf course. Book now.

If sliding down a mountain on slippery sticks isn’t your idea of fun, but you still want to get outside and be active, Stowe has many more winter activities, from Nordic skiing and snowshoeing to dog sledding and ice fishing. You can go mountain biking through the snow on a fat bike, which has wider tires to handle the snow and ice, or zip lining from snow-covered mountaintop to snow-covered mountaintop. Stowe also has an ice skating rink at the Spruce Peak Village Center, and the Trapp Family Lodge has horse-drawn sleigh rides.

Plan your next getaway with AAA Travel.

Tell us your favorite ways to spend a weekend in Stowe, Vt., in the comments.