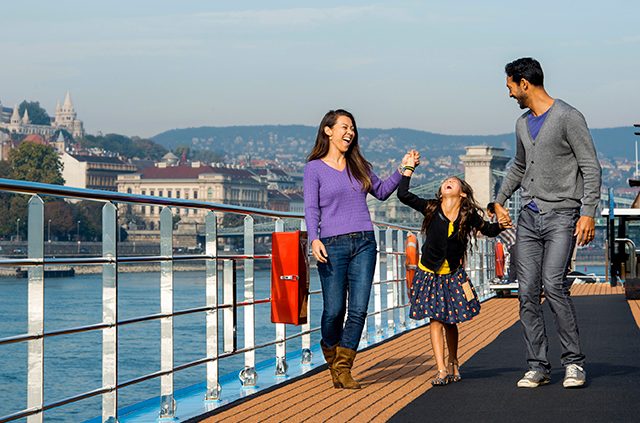 Adventures by Disney river cruise guests sail aboard a river cruise ship custom built by AmaWaterways with families in mind. New family-friendly design elements include specific room configurations, including six sets of connecting staterooms, as well as some rooms and suites that accommodate three- and four-person families, and other unique details that lend themselves to luxury family vacations.

Sometimes it can feel like you work more on your vacation than you do in the office, especially when you’re travelling abroad. You suddenly become the travel agent, tour guide and personal assistant for your entire family, making sure everyone eats well, sees all the sights and has fun. Oh, and you also need family photos. But how do you get in those photos when you yourself have somehow become the designated photographer? And where did you put the granola bars? And did you leave your English-to-Italian dictionary in the last hotel?

Adventures by Disney strives to be the answer to all of these questions and more.

When most people think of Disney vacations, they imagine theme parks and cruise ships. And maybe that one resort in Hawaii. But the Disney travel umbrella is so much bigger than that. Adventures by Disney is the touring arm of the Walt Disney Company, offering luxury guided tours all over the world. “Hakuna Matata” is right –  there are no worries involved in their vacationing process.

Adventures by Disney does offer some themed tours, like a Brave tour for Scotland, a Frozen tour for Norway and a behind-the-scenes tour of Disneyland for Los Angeles, but mostly their tours are pretty Mickey-lite. Your two travel guides do wear Disney name tags, and everyone in the tour group receives a collectible Disney pin each day, but other than that, there’s no Mouse to be found. On these trips, the Disney brand is focused on quality rather than cuddly characters.

Everything on an Adventures by Disney vacation is planned out for you, and is included with the cost of the tour. You don’t need to worry about unexpected costs or local tipping customs or museum admission or transportation. That’s taken care of. Luggage is delivered from one hotel room to the next as you move from place-to-place, no stress and no strain involved. And Adventures by Disney makes sure you and your family get to see all the sights, while also giving you some free time to explore on your own. All you have to do is kick up your heels and enjoy the ride. 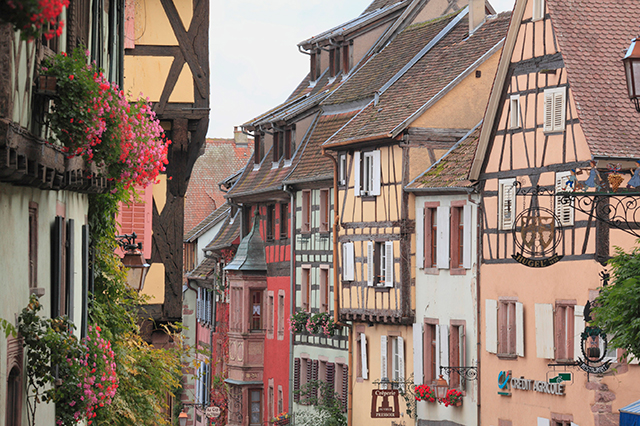 On six departures in 2018, Adventures by Disney Rhine river cruise travelers will celebrate the places and culture that inspired the Beauty and the Beast films including Riquewihr, an idyllic French village that will make guests feel as though they’ve stepped into Belle’s hometown from the movie. (Photo: Yoshihiro Takada, Walt Disney World News)

Tour groups usually range from 20-40 people, with 40 being their absolute maximum. What might seem like a group of complete strangers on the first day usually transforms into a family by the end of the trip. It’s difficult not to bond with people when you’re experiencing the wonders of the world together. And these tours aren’t just for families with young children. Adventures by Disney vacations are designed for all ages. There’s something to do for everyone, even the smallest adventurers.

If you really do want to get away from the kids, however, Adventures by Disney also offer adults-only tours. And to be fair, it might not be the best idea to bring Junior along with you to that pub crawl through Dublin.

Each Adventures by Disney tour group has two tour guides. In tours through non-English-speaking countries, the guides usually consist of one American and one local guide. The local guide not only provides local color and context, but also serves as a translator to break down language barriers. These guides are highly trained Disney cast members, and when they aren’t holding tours, they often work in plum positions such as Guest Relations at the Disney parks. The guides are smart, funny, and love integrating themselves into the group. The dedication and preparation of the guides really make the trip special. They always have snacks and water for hungry and thirsty travelers, and they’re always armed with great recommendations for how to spend your free time abroad.

There are a plethora of Disney vacations you can take through Adventures by Disney across Asia, Africa, Australia, Central and South America, Europe and even our own backyard in North America. Their most beloved tours are Italy, Norway, Scotland, England and France, Costa Rica, China and their Danube River cruise, though you can’t go wrong when choosing an Adventures by Disney vacation.

All Adventures by Disney tours are painstakingly designed over the course of almost two years before they ever get off the ground. Hotels, museums, restaurants and cultural experiences are scouted and scoured for the diamonds in the rough. The Disney name opens doors to experiences that no other tour groups have access to, like a private dinner at the Louvre, exclusive access to the secret treasures of the Colosseum, or a behind-the-scenes tour of the Sydney Opera House. It’s all part of the culture of perfection and excellence that Disney inspires.

Walt Disney envisioned his films and his parks to be experiences that parents could enjoy just as much as their children enjoyed them. Adventures by Disney follows in Walt’s footsteps by making travel accessible, fun and unforgettable for people of all ages.

Have you ever been on an Adventures by Disney tour? Tell us about your experience in the comments below!