When it comes to amusement park rides, a spin around the merry-go-round never goes out of style. Here are the top classic carousels in the Northeast. 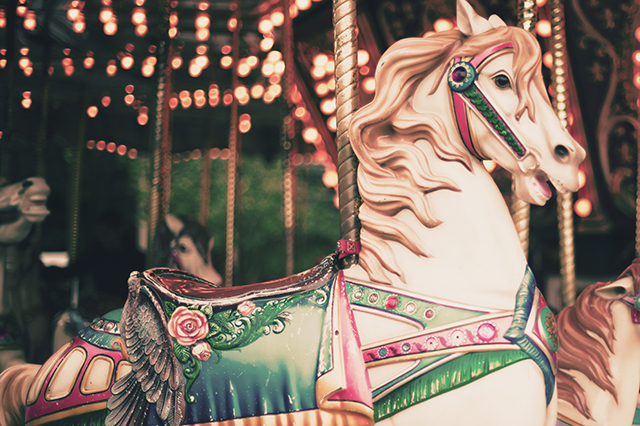 Once upon a time, carousels were the most popular amusement park rides and attractions around the country. Here are some of the top historic and antique carousels in and around Boston and New York that are still in operation today. Bring your family and enjoy some old-fashioned fun.

The Recreation Park Carousel dates back to 1925; it is one of six in the Binghamton region – known as the “carousel circuit” – donated by George F. Johnson, president of the successful Endicott-Johnson shoe manufacturer. The community benefactor believed that carousels helped to foster happiness and insisted that every ride on each of his carousels be free of charge, a practice that is maintained. As this particular carousel and park inspired an episode of the Twilight Zone entitled “Walking Distance,” Rod Serling is honored with a bronze plaque at the site, along with paintings of famous scenes from the show. The carousel and cupola have been restored, but the ride has its original organ and bells.

Four different carousels have been known as the Central Park Carousel since 1871. The current was installed in 1951 and is one of the largest in the United States. It was built in 1908 and was originally located in the Coney Island Trolley Terminal until the late 1940s. Many may remember the carousel’s symbolic role in J.D. Salinger’s classic coming-of-age novel “Catcher in the Rye.”

Built in 1912 and operated at Golden City Park in Brooklyn for 26 years, this carousel was relocated to Nunley’s Amusement Park in Baldwin, N.Y., in 1940 where it lived until the park closed in 1995. After years in storage, the beloved merry-go-round was restored through various fundraising efforts and in 2009 opened again next to the Cradle of Aviation Museum in Garden City. It plays an organ version of Billy Joel’s piano composition “Waltz No. 1 (Nunley’s Carousel),” which was inspired by the singer’s childhood memories of the carousel.

The Allan Herschel Company was founded in 1872 and has built many famous carousels throughout the nation. The company moved to this location in North Tonawanda in 1915 and operated there until the 1970s. Today, the factory building is home to a museum featuring two operating antique carousels – a 1916 merry-go-round that was one of the company’s first and a small 1940s children’s carousel. There is also an exhibit devoted to Wurlitzer Music Rolls, which provided the music for many carousels.

Surrounded by the city of Hartford, smiling faces can be seen making their rounds on this vintage 1914 carousel featuring 48 hand-carved horses and a Wurlitzer band organ. The carousel is opened, operated and continuously restored by the New England Carousel Museum in Bristol, which is also worth a visit. The museum houses the largest collection of carousel pieces in the country.

Charles Looff was one of the earliest and most notable carousel designers. This carousel was his showcase, originally built for prospective buyers, and it is his most elaborate. Looff was known for glittery embellishments such as mirrors, decorated animals, jewels and real horsehair tails, and you’ll see all of them on display here. Said to have built around 40 in his career, this is one of about 10 of Looff’s carousels that are still in operation today.

They don’t make amusement park rides like this anymore. Constructed in 1876, the Flying Horses Carousel on Martha’s Vineyard is the oldest operating platform carousel and one of the only surviving flying horse carousels in America – the other is the Watch Hill Flying Horse Carousel in Westerly, R.I. (also in operation), which is said to have been constructed around the same time. These types of carousels are referred to as “flying” because the horses, carved from real wood and with real horsehair manes and tales, are suspended from chains and appear to soar when they start spinning.

For antique charm and a huge selection of animals and unique creatures to choose from, you don’t want to miss this carousel. The merry-go-round originally opened at Salem Willows Park in 1866 and includes a hand-carved menagerie of animals such as camels, sea monsters, lions, buffalo and dogs, in addition to over 50 horses. Be sure to take a spin while visiting the city’s nearby waterfront park or arcade.

The Paragon Carousel is all that remains from the much-loved Paragon Park amusement park that operated on Nantasket Beach and closed in 1985. Today its 66 carved horses and booming Wurlitzer Band Organ continue to bring joy to all who visit. Like so many carousels and restored amusement park rides, it is a piece of the past that will live on into the future thanks to its community.

What’s your favorite carousel or carousel memory? Tell us in the comments.

Plan your own trip across the Northeast with AAA.