Whether they're part of your summer traditions or your memories of the past, each of these Northeast parks are iconic in their own way. 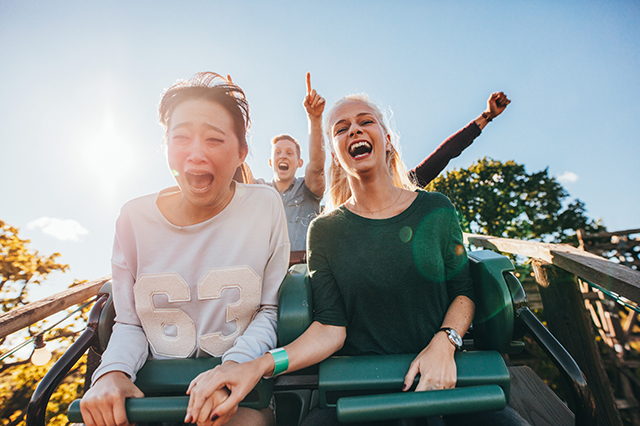 With high-intensity rides, popular attractions and powerfully nostalgic memories, these iconic amusement parks in the Northeast have truly mastered the art of terrifying and entertaining visitors.

Many beloved Northeast amusement parks are still standing today, and visiting them can feel almost like walking into your sweetest childhood memories. Here are the amusement parks where you can take a stroll down memory lane (while also enjoying some classic thrills).

Luna Park is one of the most nostalgic amusement parks around. Coney Island has been a hot spot for theme park attractions and innovations since the 1800s. Today, Luna Park features head-spinning rides, optical illusions and vibrantly colored embellishments. Among the many rides at this grand beachside playground are the 150-foot-tall Sling Shot, the Soarin’ Eagle roller coaster and the longstanding Wonder Wheel and historic Cyclone wooden roller coaster. Complete the trip with a hot dog from the original Nathan’s Famous hot dog stand. One of the top cheap amusement parts in our area, from nostalgia to one-of-a-kind entertainment, you’re sure to get a lot of bang for your buck at Coney Island.

Adventureland has been thrilling Long Island kids since 1962. Here visitors can enjoy a selection of arcade games, rides and attractions that are geared to a range of ages. Along with refreshing water rides and thrill rides such as the spinning Turbulence Coaster and Mystery Mansion, you can also find nostalgic amusement park rides like the ornate Merry Go Round and Wave Swing. Long Islanders will remember field trips for physics class, cuddling in the haunted house and getting drenched on the long flume ride. This Long Island fixture will instantly bring you back to the rush of a roller coaster on a hot summer day.

First opened in 1974, Six Flags Great Adventure includes 11 themed areas and a variety of scream-inducing rides. Those who survive the 70 mph blast and 76-degree drop of the wooden coaster El Toro can also attempt Nitro – one of the top steel roller coasters in the country. If you’re feeling brave enough, try conquering Kingda Ka, the world’s tallest roller coaster. While you’re there, try their Wild Safari Drive-Thru Adventure, which features 1,200 animals. AAA members can save over 45% on admission to Six Flags Great Adventure.

For coaster enthusiasts in the Rhode Island and Massachusetts area, Six Flags New England is home. This “coaster capital of New England” includes rides like the 400 foot-tall New England SkyScreamer swing, the Joker 4D Free Fly Coaster, Wicked Cyclone and Superman The Ride (featuring a 221 foot drop!). Want to cool off? Head on over to their water park, Hurricane Harbor. AAA members can save up to 50% on admission.

Ever since it opened in 1906, Hersheypark has been a sweet destination. This chocolate-themed site uses exhilarating rides and tasty indulgences to delight all who visit. Don’t forget to stop by Hershey’s Chocolate World and take the factory tour ride, which is completely permeated by the smell of chocolate. Everyone who visits Hersheypark is sure to have delicious memories. AAA members can save up to 20% on admission.

People have been coming to Dorney Park in Allentown, Pa., since 1884 – and it’s still a destination to write home about today! This Pennsylvania theme park is equipped with both acclaimed roller coasters and award-winning water attractions. Take a ride on the 5,600-foot-long Steel Force roller coaster to drop 205 feet in the air, or battle the waves in the 590,000-gallon wave pool. The many themed rides, restaurants and activities are ideal for a day of fun family bonding. AAA members can save up to 45% on admission.

Canobie Lake Park has been bringing family fun to New Hampshire since 1902. Live shows, games, rides for all ages and even puzzle rooms are guaranteed to deliver smiles all day. The bravest thrill-seekers in your group can enjoy the Yankee Cannonball wooden coaster, or take on Untamed, where grizzly bear-shaped cars take riders through a series of loops, turns, banks, rolls and a stomach-dropping 72 foot fall.

Claiming to be the oldest continuously operating amusement park in North America, Lake Compounce has over 170 years of experience in family-friendly attractions and entertainment. From classics like bumper cars and a carousel to shows, roller coasters, adventure rides and Crocodile Cove – the largest waterpark in Connecticut, there’s fun around every turn.

It’s too soon to sort Edaville as an amusement park of the past, but its gates have only been opened for select special events since the beginning of the pandemic. This heritage railroad and amusement park first opened 75 years ago, and has since become a beloved staple of the community. Kids go wild for the life size Thomas Land, based on Thomas the Tank Engine, and the real steam train. It’s even rumored that Walt Disney, a train fanatic himself, was inspired by Edaville when he visited in the 1940s. Edaville is currently for sale, and many of its fans hope that it can get a new lease on life.

While we can no longer visit these iconic amusement parks, generations of fans and guests still have nostalgia for all the thrills they once offered.

Nunley’s was a carousel pavilion and amusement park situated on Sunrise Highway in Baldwin from 1940-1995. It was a popular attraction, featuring a restaurant, rides, games and Nunley’s Carousel. This beautiful and ornate carousel actually began life as “Murphy’s Carousel” in 1912, at Golden City Park in Brooklyn. When Golden City Park closed, Nunley’s Carousel was renamed and relocated to Baldwin, where it became the crown jewel of Nunley’s Carousel and Amusements. The park featured attractions like a roller coaster, a Ferris wheel, pedal cars, a miniature golf course and more. When Nunley’s closed in 1995, the carousel was purchased by Nassau County for preservation. However, it sat untouched for years. From 2007 to 2009, the carousel underwent a complete refurbishment to restore it to its former glory. While the park is gone, you can still ride Nunley’s Carousel on Museum Row in Garden City today.

Action Park is widely regarded as one of the most dangerous theme parks of all time – but people still have nostalgia for it. Why? Action Park skinned knees, left bruises and broke bones. But for many Jersey residents, it was simply a weekend getaway or summer job. It was a lawless land where kids could prove how tough they were by surviving dangerous, poorly-designed rides (including a water slide that featured an upside-down loop). It was for the best that Action Park was closed, but generations of guests still remember rides like the concrete Alpine Slide, the gasoline-leaking Bumper Boats and the freezing waters of the Tarzan Swing.

From 1847 to 1995, Rocky Point Amusement Park was the place to be for Rhode Islanders. In its heyday, it featured rides and attractions like the Corkscrew Loop Roller Coaster, the Freefall, the Castle of Terror and even a ballroom that hosted popular bands and musicians. Today, Rocky Point is a state park. Guests can still see the remnants of amusements past, like the skeleton of the Skyliner gondolas, the Circle Swing ride tower and a large archway that Rocky Point Amusement Park had acquired from the 1964 World’s Fair in Flushing, Queens.

Known as “the Coney Island of New England” Crescent Park was open from 1886-1979. It became famous for attractions like its bandstands, haunted houses, midway games, roller coasters and boat rides. One of the most beautiful and beloved features of the park, however, was the Crescent Park Looff Carousel. It was hand carved by master woodcarver Charles I.D. Looff in 1895 and it is one of the only surviving parts of Crescent Park today. The City of East Providence acquired the carousel after Crescent Park closed, and it was declared a National Historic Landmark in 1987. Currently, the carousel is undergoing a massive restoration to ensure that people can keep enjoying it for generations to come. Hopefully it will reopen soon, and we can all get a chance at reaching the brass ring.

Looking for theme park discounts and more? AAA members can get exclusive savings of up to 40% at concerts, theme parks, virtual events, museums and attractions. Go to AAA.com/Tickets.

12 Thoughts on “Iconic Northeast Amusement Parks, Past and Present”