The Best Epcot Restaurants: Eating Around the World

Nobody does theme park food like Disney. Disney's Epcot has some of the best food in Florida, but what are the best Epcot restaurants? 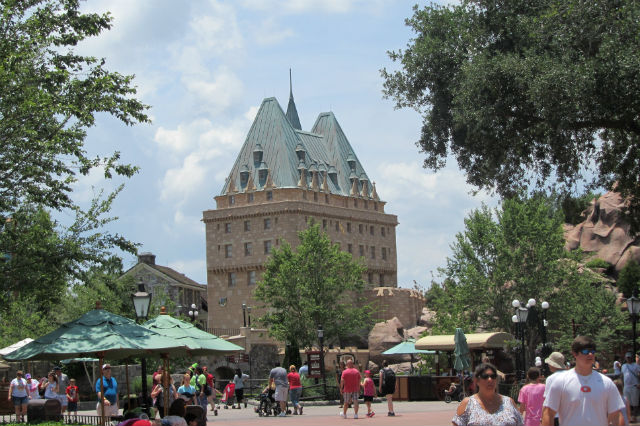 Nobody does theme park food like Disney, and no Disney park does it quite like Epcot. Epcot’s theming makes it a perfect home for delicious food from across the world. If you’re unfamiliar, Epcot is like a perpetual world’s fair, with the front half of the park (Future World) dedicated to science and innovation and the back half of the park (World Showcase) populated by a series of pavilions inspired by different countries. The best Epcot restaurants are located in World Showcase, where the main attraction is food and drink.

There are 11 pavilions in World Showcase: Mexico, Norway, China, Germany, Italy, America, Japan, Morocco, France, Great Britain and Canada. Each pavilion is home to restaurants, booths and shops filled with food from its corresponding country. With multiple dining options  Epcot’s World Showcase offers a plethora of restaurants to choose from. Here are some of our favorites, plus recommendations for the best Epcot restaurants for fireworks viewing.

There’s no better atmosphere for dining in Epcot than at the Germany pavilion’s Biergarten. As soon as you walk in, you’ll be transported to a charming Bavarian village at nighttime – and a polka band has just set up shop in the middle of the town square! This all-you-care-to-eat buffet is filled with rich, hearty German food that will have you going back for seconds (and maybe thirds, if you weren’t so full). Since this is a biergarten, beer flows by the liter (or half-liter). If you want to try a variety of brews, order the German beer flight. My personal favorite, however, is the Schöfferhofer Grapefruit Hefeweizen. Prost!

Good pizza? In Florida? Impossible! But Via Napoli is the exception. Inside this restaurant, you’ll think you’re actually in Italy. Three gigantic pizza ovens line a whole wall, with carved faces, mouths full of fire and the names of famous Italian volcanoes. Via Napoli has delicious Italian fare no matter what you order, but come on, you should get the pizza.

Akershus offers one of the best character dining experiences at Walt Disney World. You and your little ones will be treated to a meal with a rotating cast of princesses like Ariel, Belle, Snow White and more. Akershus serves traditional Norwegian food, which some pickier customers might not take to, but there are also a few more familiar options on the menu, like pasta, chicken and pork tenderloin. The kids’ menu is similarly accessible to those who are there for the princesses rather than the food.

Though not quite as exotic as some other pavilions, Canada is not fooling around when it comes to its food. Le Cellier is a steakhouse with a faintly French Canadian theme, and it’s one of the most popular restaurants in Epcot. Try the filet mignon, prime rib-eye steak or maple-brined chicken breast. But don’t forget to have some poutine! Le Cellier offers both beef bourguignon and crispy soy-glazed pork belly poutine. Yum!

Tucked away in the France pavilion and up a sweeping spiral staircase, Monsieur Paul is the most upscale and expensive restaurant in Epcot. The white tablecloths, abundant wine cellar and refined decor give the restaurant an air of fine dining – even though most of the patrons are sunburned theme park guests. Monsieur Paul does have a dress code, but it’s a bit more relaxed than it might have been if it wasn’t situated in the back of a theme park. As long as your clothes are in good taste and good condition, you’ll be fine. If I were you, I’d stick to the prix fixe menu, since dinner can get a little pricey. If you want a taste of France without such an exorbitant price tag, try Chefs de France, which is right downstairs.

The Moroccan pavilion is deep, filled with secret surprises and lots of photo ops. All the way at the back of the pavilion is Restaurant Marrakesh, which serves up traditional Moroccan food. Since this restaurant is almost hidden away from the rest of the park, it’s actually not too difficult to get seated without a reservation. At Restaurant Marrakesh, belly dancers dance to live Moroccan music on the central dance floor, giving the whole restaurant the feeling of a celebration. Though there is some Americanized fare available on the menu, don’t let that stop you from trying the dishes that include couscous, roasted lamb, kebabs and tagine.

What’s dinner without a show? Teppan Edo in Epcot’s Japan pavilion is a teppanyaki-style restaurant for diners of all ages. “Teppanyaki” is a style of cooking usually referred to as “hibachi” in America. Diners are seated around a large, iron griddle (a “teppan”) while a teppanyaki chef cooks their meals right in front of them. The chefs at Teppan Edo might play with your food – performing tricks and feats of skill while they chop and grill your dinner. The adults at the table will also enjoy the wide selection of sake. Speaking of the adults at the table, check out our list of the best things to do at Disney World for adults.

Fireworks: Where to Sit

These restaurants are all well and good, but they’re INSIDE! What if you’re eating while Epcot’s nighttime show starts? Right now, the nighttime “Illuminations” show takes place over World Showcase Lagoon, the lake in the middle of World Showcase. Though Illuminations is on its way out, the new nighttime fireworks show will more than likely be in the same place.

The Rose and Crown Pub in the Great Britain pavilion has both indoor and outdoor seating, so make sure that you’re seated outdoors if it’s time for the fireworks to start.

La Hacienda de San Angel in the Mexico pavilion is on the other side of the World Showcase Lagoon, and it offers brilliant views of the fireworks through its wide windows. If you can’t get a reservation, go to La Cantina de San Angel instead – it’s Mexico’s open-air quick service restaurant, and it’s right next to the water.

Spice Road Table in the Morocco pavilion offers terrace seating right on the edge of the lagoon. It’s much easier to get a reservation here than at the Rose and Crown or La Hacienda de San Angel, since it’s not Morocco’s main restaurant (and since tapas-style dining just isn’t for everybody).

You can also view fireworks from Monsieur Paul or Tokyo Dining, but neither of them get you as close to the action as the others.

What are the best Epcot restaurants in your opinion? Let us know in the comments below!

Save on your next Disney vacation when booking with AAA.

5 Thoughts on “The Best Epcot Restaurants: Eating Around the World”