Summer can be a bummer when temperatures start to climb. Beat the heat at these splashy New York water parks. 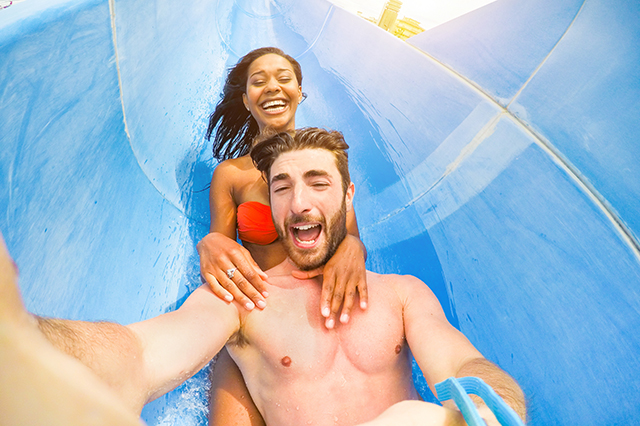 When the summer temperatures start soaring, there are few better ways to cool off and have a good time than by visiting a nearby water park. We’ve put together a list of the top New York water parks where New Yorkers and day trippers alike can relax in lazy rivers or zip down slides.

This 96-acre park opened in 1991 with seven slides, a lazy river and a few kiddie pools, but has since expanded to 30 rides. Not only is it one of the top water parks in New York, but it has been ranked by the Travel Channel as the third best water park in the U.S. Some of Splish Splash’s most popular rides are Dinosaur Falls, a pipeline with three slides; Bootlegger’s Run, a water roller coaster; and Dr. Von Dark’s Tunnel of Terror, which features 360 degree spins and a 40-foot drop.

First debuting in 1956 as the Enchanted Forest of the Adirondacks, this classic New York water park changed to its current name in 1988 and now has 32 attractions. Its water rides include the 500-foot-long Black River tube slide, the spiraling Curse of the Silverback tube ride, the jungle-themed Amazon, a kid’s car wash walk-through attraction, the Killermanjaro speed slide, a lazy river, rapids tube ride and tidal wave pool. But the park also has amusement rides, such as bumper cars, a carousel, Enchanted Forest Express railroad, Ferris wheel, helicopter ride and Tilt-a-whirl.

Featuring 15 attractions and a variety of restaurants serving everything from tacos to Belgian waffles, this Fishkill water park is a popular spot in Dutchess County for spending a day in the water. New for 2018, the park’s newest ride is the Megalodon, a zero-gravity group raft ride! Other popular rides include the Arctic Plunge Racer, a head-to-head drag race slide; the Bullet Bowl, a four-story thrill ride that allows for one or two-person tubes; and the Humunga, the state’s only zero gravity half-pipe.

Owned and operated by Six Flags, this water park originally opened in 1954 as Mother Goose-themed amusement park Storytown USA, but then became Great Escape in 1983. In 2006, the site opened its water park, which features such rides as the Avalanche, Tall Timbers Treehouse, Tak-it Eesi Creek, Lott-A-Watta-Bay and Soakum Spring. The park also has a number of restaurants, a gift shop and full resort that includes everything from an arcade and fitness center to the Tranquility Spa.

Named after one of its most popular rides, Zoom Flume features slides, play areas and several food stands. The Black Vortex consists of a dark tunnel in which riders go through in double tubes. Other favorites include the Mighty Anaconda and Canyon Plunge body slides., the wave pool, lazy river, wild west-themed splash park and zip line. Food options include a pizzeria and several snack bars.

Located on 56 acres in the Finger Lakes, this New York water park offers free parking, rental lockers, deck space for relaxing and lots of soaking wet fun. Rides and attractions include a 27,000-square-foot wave pool, the Mammoth white water rafting ride, the Adventure River and several thrill slide rides, such as The Cliff’s 65-foot straight-down drop. The park also has paddleboats and canoes available for rent, beach volleyball and a souvenir shop.

Combining a water park with a variety of other activities, this Fulton park offers everything from water slides to mini-golf and Go-Karts. Thunder Island’s water park attractions include the Black Water Tunnel Twisters and the high-speed Thunder Rush Extreme Body Sliding, as well as tube slides, kiddie slides, a mini river for youngsters and two body twisters. Visitors can also take part in Formula 1 and Grand Prix Go-Kart racing, play a round of jungle-themed mini-golf, drop by the park’s video game room, zip line or grab a bite at its café.

Located just a few miles from Darien Lakes State Park, Six Flags Darien Lake offers both an amusement park and a water park. Take on the twisty Brain Drain, Big Kahuna raft ride, Swirl City Slide Complex or the spiral Tornado. Slow down in the Crocodile Isle wave pool or the Flotation Station lazy river. Visitors can also rent cabanas for either a day or weekend that includes tableside food and beverage service, a lockable storage container and two tubes.

Considered the twelfth oldest operating amusement park in the world, Seabreeze features both dry attractions, such as rollercoasters and thrill rides, and a water park. Some of the top water park rides at Seabreeze include The Wave, a large pool in which waves come crashing every 10 minutes, as well as the Helix bowl water slide, Soak Zone water playground, four-lane Hydro Racer water slides, Looney Lagoon water play area and Lazy River. The park also offers restaurants, shows and shops.

What’s your favorite New York water park? Tell us in the comments!