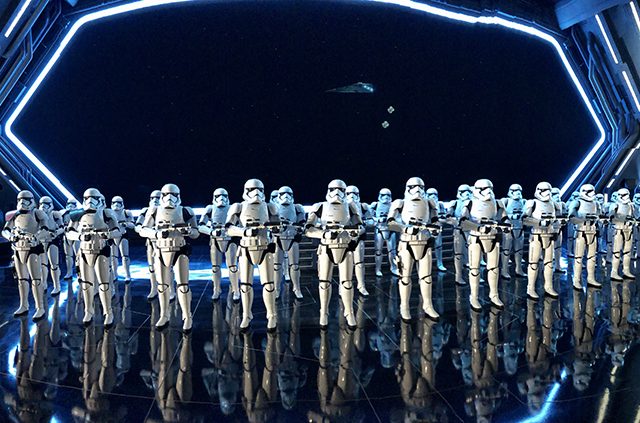 Stormtroopers greet Rise of the Resistance riders in a hangar bay.

On Dec. 5, on Batuu’s sister planet on the East Coast, “Star Wars” fans celebrated the much-anticipated opening of Rise of the Resistance. The innovative ride integrates four different ride experiences – including a walk-through, a ride in a trackless vehicle, a motion simulator and an elevator drop – making it Disney’s longest attraction ever. 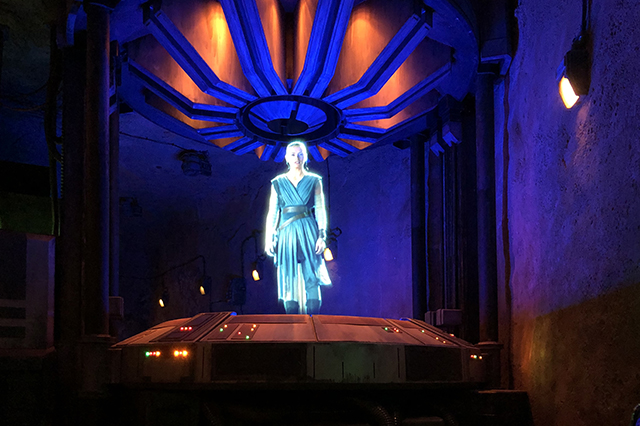 A Rey hologram recruits riders on the new Rise of the Resistance ride in Star Wars: Galaxy’s Edge.

Rise of the Resistance

Tucked into a scrubland forest on Batuu is the entrance to Disney’s most epic indoor dark ride. Upon entering the Resistance, military outpost “guests” are recruited by an animatronic BB-8 and a Rey hologram for a strike against the First Order. After exiting the briefing rooms, guests board a shuttlecraft and all goes well until a Star Destroyer tracks the shuttle. There is no escape, and next thing you know the doors of your shuttle open to 50 animatronic stormtroopers, TIE fighters and First Order officers. The scene is set in front of a 100-foot-wide window looking into outer space. There’s not much time to contemplate your fate: First Order officers quickly herd their prisoners into a prison cell to meet Kylo Ren for interrogation.

The prisoners eventually escape their cell in a troop transport driven by an animatronic droid. The eight-passenger escape vehicle travels without a fixed track. Along the ride you’ll meet Kylo Ren and towering AT-ATs, all while dodging capture and laser fire from more stormtroopers than you ever cared to meet.

After meeting Kylo Ren one more time, the ride ends with your vehicle leaving the Star Destroyer via an escape pod. You’ll survive, but not without crashing, ever not so gently, back on Batuu. Enhanced by digital projections, the multistory plunge is not for the faint of heart.

The ride is epic and will be busy from bright suns to rising moons. Plan for long wait times. 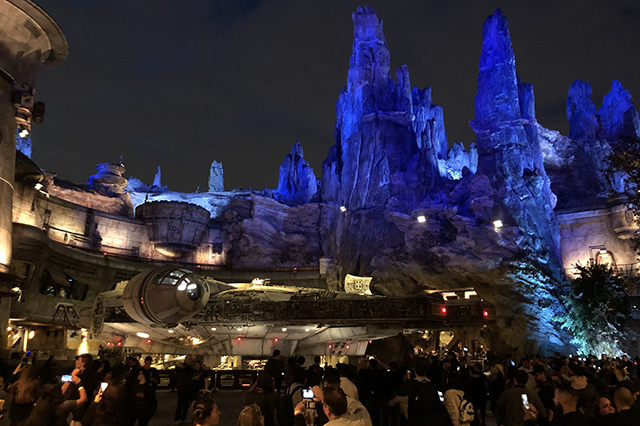 Who hasn’t dreamt of getting into the cockpit of the fastest hunk of junk in the galaxy? To board the Millennium Falcon through the same starboard airlock used by Han Solo and Chewbacca in “Star Wars: The Force Awakens” and to sit around the Dejarik table in the main hold of the ship – these are now dreams come true for many “Star Wars” fans. After going through an elaborate queue, riders settle into the cockpit of the ship in groups of six (two pilots, two gunners and two engineers); soon it’s time to jump into hyperspace.

You and your crew are partially in control of the ship. Therefore, full attention is required. Now is not the time to share your glory on social media, as how you execute your mission will have consequences that will be on record throughout your stay. Trust me, you don’t want an unhappy Wookiee to know who wrecked his ship.

Learn more about Galaxy’s Edge by downloading the Play Disney Parks app to your phone. Bring up the Star Wars Datapad to interact with the land’s control panels and droids, and even translate galactic languages. The question is, who will you support? Will you pledge alliance to the Resistance or the First Order, or are you a scoundrel looking out only for yourself? The choice is yours! 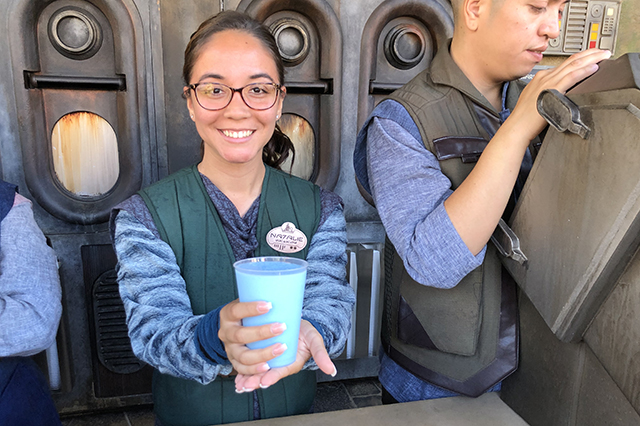 Blue milk, anyone? The exotic space shake can be ordered up at the Milk Stand.

Flavors From a Galaxy Far, Far Away

Oga’s Cantina is a super-headliner, though; long lines form as soon as visitors arrive. Make a reservation for a visit to the popular watering hole 180 days in advance via the app or online. Please check at the location for same-day availability. A no-show fee of $10 per person will be charged to your credit card if you decide not to go or use the reservation solely to obtain a guaranteed entry into Galaxy’s Edge.

You’ll find the main eatery, Docking Bay 7 Food and Cargo, docked on top of a large hangar. Here guests enjoy culinary specialties prepared by chef Strono “Cookie” Tuggs. The menu is extensive, but the Kaadu ribs are an absolute must. (Yes, you read that right, they’re named after the creature Jar Jar Binks rode in “Episode I.”) For dessert go for the Batuu-bon, a chocolate cake with white chocolate mousse and coffee custard.

For a quick bite I recommend the Ronto Wrap at Ronto Roasters. I promise it tastes just like roasted pork and grilled sausages.

One stop at the Milk Stand and you’ll finally know what the famous blue milk tastes like. Also available is green milk. Both are a frozen blend of exotic tastes and fruity accents. A word of caution, though: The drinks are an acquired taste. I suggest buying one for your entire party and sharing to see if you like it.

Last but not least, fret not: Popcorn is available on Batuu. Colorful kettle-cooked popcorn with sweet, spicy and savory seasoning is for sale at Kat Saka’s Kettle. 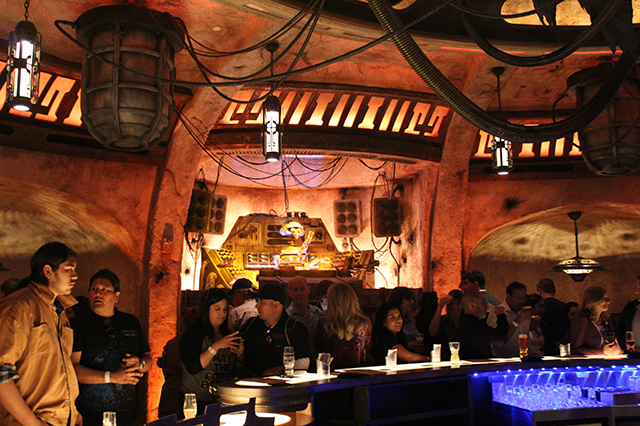 You Reached the Outer Rim, So Now What?

Terrestrial visitors coming to Batuu in search of adventures won’t be disappointed. The land offers plenty of shopping, food, beverages and interactive games.

Savi’s Workshop is home of the custom-made lightsabers at $199 plus tax, while at Droid Depot guests can create astromech droids for $99 plus tax. Mysterious items from different eras of the “Star Wars” galaxy are available at Dok-Ondar’s Den of Antiquities. Just bring lots of terrestrial plastic with you, and don’t gamble it away at Oga’s Cantina!

With limited capacity Disney implemented a reservation system for Savi’s Workshop and Droid Depot, which includes guaranteed entry into Galaxy’s Edge. But be warned that a credit card will be required to make a reservation and you’ll be charged a cancellation fee ($200 for the lightsaber, $100 for a droid) if you are a no-show. Reservations can be made up to 60 days before your visit via the app or online. Some same-day reservations will be available at 7 a.m. on the morning of your visit.

At the vibrant marketplace check out the Black Spire Outfitters for robes and tunics inspired by those worn by famous Jedi. At the Toydarian Toymaker, a small stall filled with plush characters and fun games, stock up on Chance Cubes, Cards of Sabacc and (my favorite) the Dejarik game. Creatures and critters from across the galaxy can be found at the Creature Stall. If you want to pledge alliance to the Resistance, check out the Resistance Supply stall for caps and pins. If, on the other hand, you are pulled to the Dark Side, the First Order cargo stall is right for you. First Order-branded merchandise will make sure everybody knows which side you are on! At Jewels of Bith guests can purchase T-shirts and other items to commemorate their visit to Batuu. 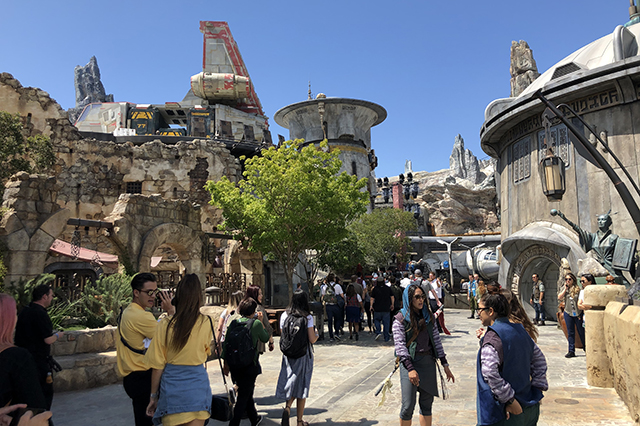 Docking Bay 7 Food and Cargo is the land’s main eatery.

For starters, make sure you download the official Walt Disney World or Disneyland app to your smartphone before your visit and link the theme park tickets of your entire party in the app. If guest demand for entry into Galaxy’s Edge or the new Rise of the Resistance ride is high – and it will be so for quite some time – Disney may, as needed, use a virtual queuing system. Find out how it works here.

Once you visit the park check the app to see if you can access the land right away or if you need to join a boarding group for later access. You must be signed on to the app and inside the park to join a boarding group; there are no advance reservations for access to the land. You’ll then receive a confirmation with a boarding group number, which you can check on the app or at digital signage in the park at any time. You’ll also get a smartphone notification when it’s time for you to enter the land. Once you get your notification you have two hours to enter Galaxy’s Edge.

If you don’t want to use the app, you can visit a Guest Experience Team kiosk to obtain access to the land.

Rise of the Resistance is set to open at Disneyland Jan. 17.

How excited are you for the Rise of the Resistance? Will you be heading to Walt Disney World to check it out or will you wait for the crowds to die down? (Will they ever?)

Plan your Disney vacation with AAA and save.