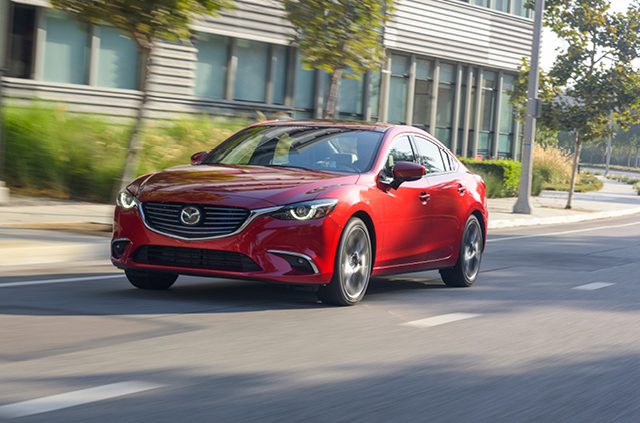 With a starting price of just $21,945, the 2017 Mazda6 is one of the least expensive midsize sedans on the market, yet is hands-down one of the most fun to drive. For 2017, the Mazda6 now has its vehicle dynamics control system, G-Vectoring Control, as standard equipment, as well as numerous sound-absorbing materials for a quieter and more refined ride. All three trim levels are powered by a 184-horsepower, 2.5-liter four-cylinder engine with a substantial 185 foot-pounds of torque. The result is responsiveness in every driving situation, ranging from a full stop to highway passing, on mountainous roads as well as on twists and turns.

While all 2017 models have improved sound insulation, the Grand Touring test model was exceptionally quiet with the addition of laminated front-side windows, a luxury feature generally not seen on cars in this class. New for 2017 is the full-color Active Driving Display, a head-up display that is projected on a small screen on the dash with current speed and navigation instructions as well as speed limits, traffic sign recognition and lane-departure warnings. While the system had a flawless execution, I found the close distance of the display (it was just above the dash, versus toward the end of the hood as on other systems) too close for my liking and somewhat distracting.

– By Tara Mello, for AAA Northeast