After 60 years on sale in the U.S., the Nissan Pathfinder is one of the true pioneers in the SUV world. While it may be a “senior” in the segment, the 2017 Nissan Pathfinder is no slow-moving, muumuu-wearing granny. It’s a hot, single grandma whose hobbies include competitive country dancing and backpacking. The Pathfinder received... 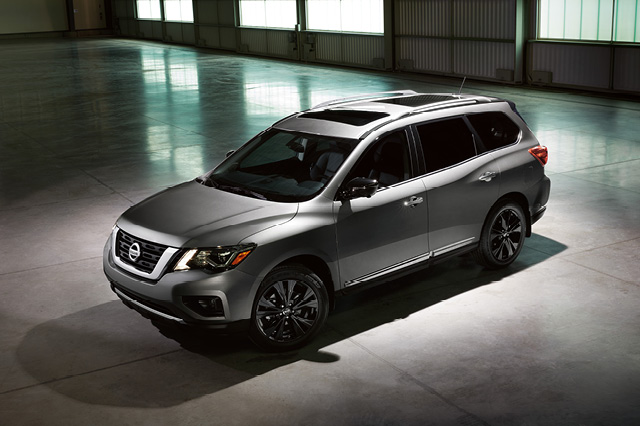 After 60 years on sale in the U.S., the Nissan Pathfinder is one of the true pioneers in the SUV world. While it may be a “senior” in the segment, the 2017 Nissan Pathfinder is no slow-moving, muumuu-wearing granny. It’s a hot, single grandma whose hobbies include competitive country dancing and backpacking.

The Pathfinder received a makeover for 2017 with a new “face” from the windshield forward, including new LED headlights in a boomerang shape and LED daytime running lights in a restyled hood. It also has a front bumper that, along with Nissan’s new signature V-Motion grille, give the seven-seater a whole new look. Other styling changes to the sides and rear enhance the new front end.

The new look isn’t just skin-deep either. It sports a new direct injection gasoline V-6 engine, with 284 horsepower (up from 260 hp) and 259 foot-pounds of torque (up from 240 foot-pounds) to provide better performance, as well as improved towing capacity of up to 6,000 pounds (a 1,000 pound increase). Despite the increased power, it maintains the same fuel economy as the previous generation, averaging 23 mpg combined on two-wheel drive models.

The 2017 Nissan Pathfinder comes in four trim levels – S, SV, SL and Platinum – and all are offered in either two- or four-wheel drive. All models feature an 8-inch touchscreen monitor and an EZ Flex Seating System with a second-row tilt and glide seat that allows easy access to the third row. My four-wheel-drive Platinum test model came well-equipped with heated and cooled front seats, heated second-row seats, tri-zone automatic climate control and a new motion-activated liftgate that opened with a wave of the foot. Safety features included an upgraded version of the Around View Monitor that detects moving objects, blind-spot and cross-traffic systems, and Forward Emergency Braking, which sounds warnings and slows the car if the Pathfinder approaches a car too quickly.

By Tara Mello, for AAA Northeast