Today’s Slime Isn’t a Toy, But a DIY Project 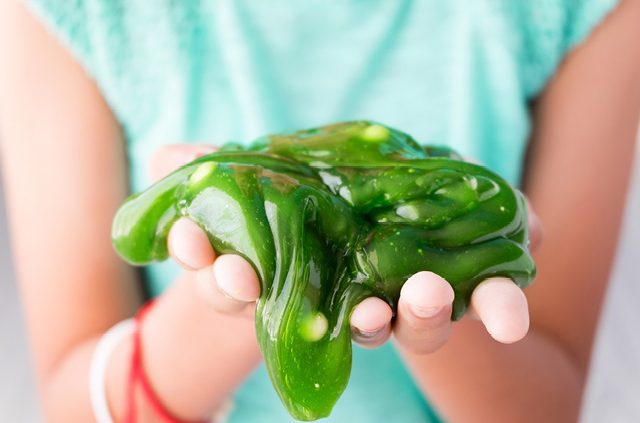 You’re in the checkout line at the store when a young customer places her items onto the counter: Elmer’s glue, shaving cream, borax, glitter and food coloring. She bounces with excitement, as mom pays for the supplies. If you have young ones, you probably know exactly what’s going on: It’s slime time!

Do-it-yourself slime videos have taken over YouTube channels and Instagram feeds, and millions of kids have taken notice.

When I was a kid, Nickelodeon was practically the proprietor of slime. The green goo was dumped on TV show cast members, game show contestants and celebrities at awards ceremonies. It looked gross and unpleasant, but most kids wanted to know what it felt like to have it dumped on them. Before that, kids in the 1970s played with Mattel’s popular slime toy that came in a small trash can. It was also green and would ooze everywhere if you let it.

Today, the slime that kids are using isn’t even green or gross. Today’s slime is all different colors, textures and levels of gooey, and can even be scented, glow-in-the dark, glittery or magnetic. The possibilities when making DIY slime are nearly endless. A lot of the fun is in the process, something that kids playing with Mattel’s toy or watching Nickelodeon may have missed out on.

Plus, isn’t it just fun to play with? There’s a reason why so many of us were fascinated by slime as kids, regardless of its gross nature. Now it’s pretty, and more popular than ever.

Are the kids in your life slime-obsessed? What do you think about the trend? Tell us in the comments below!

diy, do it yourself, food, green, Instagram, old, US
Comments