Fresh, seasonal ingredients make up the bulk of Tuscan cuisine, which has its roots in hearty peasant fare. 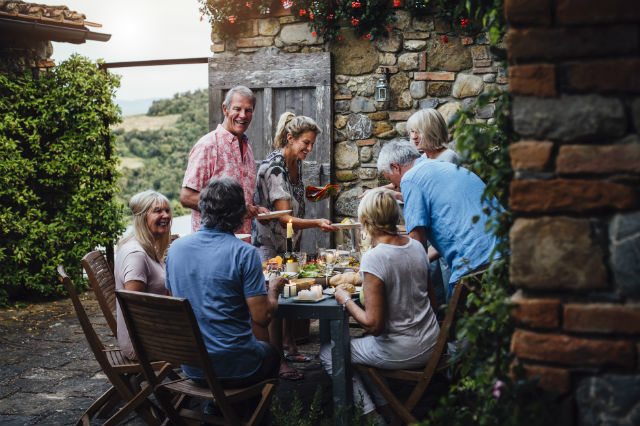 True to its heritage, the Tuscan food of today is still derived from its peasant roots to create simple hearty meals. You’ll find much of the fresh ingredients that enhance each meal are local and seasonal.

“In Tuscany, it’s all about simple and fresh and not necessarily a million spices or 10 different components,” said Anne Lischwe, AAA Northeast travel sales manager for New York and New Jersey, who has lived in Tuscany and other parts of Italy. “Everything the locals have is super fresh. They don’t buy it and freeze. They buy it from someone who grew it next door and then picked it and they eat it the next day. Everything tastes different. You are not eating anything processed.”

Food is an important part of the Tuscan culture, said Lischwe.

“In Tuscany, in most cases, people you meet are from there and their parents and grandparents are from there,” she said. “As part of that, they are proud of where they are from and that shows in the way they cook and eat. There is a lot of pride in the food they make and that it is grown or from their own region.”

Here are some highlights of a traditional Tuscan menu. Mangia!

Start your meal off with a family-style appetizer of antipasto toscano, a selection of meats and cheeses from the Tuscany region. Included among the choices could be locally made pecorino cheese (made from sheep milk) with a drop of honey, and such meats as salame toscano and finocchiona (fennel-flavored salami.) You may also find lardo di Colonnata, a cured pork lard from its namesake town. Served as part of an antipasto platter or on its own, crostini toscani – thinly sliced toasted bread topped with chopped chicken liver pate –is another popular appetizer.

Magical Tuscany Is Waiting For You!

Tuscany’s landscape is a magical color wheel, where the rays of sunshine electrify its vineyards and groves. In the heart of the countryside, visit a family wine estate showcasing its wine cellar, vineyards and olive groves. Engage in an authentic Tuscan lunch and cooking lesson with the estate’s own chef. This is Tuscany.

Soups are often offered as a first course in the Tuscan meal. Beans are a big part of the Tuscan diet, and ribollita soup pairs them with thick stale Tuscan bread and vegetables to create a hearty comfort-style food in the winter. Pappa al pomodoro soup also uses stale Tuscan bread to create a thick soup with tomatoes. Panzanella is a cold, chopped bread salad that typically combines the main ingredients of stale bread, tomatoes and basil.

Pasta can be another choice for the first course. Wide egg noodles (pappardelle) could make a tasty base for a wild boar sauce. You can also pair the noodles with other meat sauces, mushrooms and other options. Or try Tuscany’s black and white truffles on top of pasta. Unlike in the U.S., Italians typically only use a small amount of sauce on pasta. 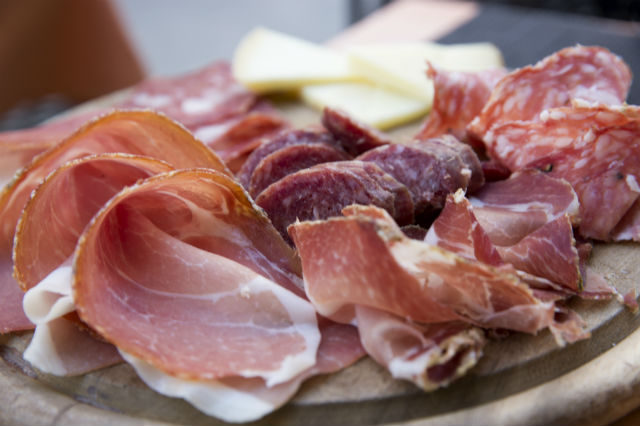 Carnivores will fall in love with the bistecca alla fiorentina, the impressive Florentine T-bone steak. This is one dish to be shared, as it typically weighs in at 3 to 4 pounds and is cooked simply with olive oil and salt. It’s also served very rare: Even if you ask for it well-done, the wait staff will in most cases serve it red, as is custom.

If seafood is more to your liking, cacciucco is a fish stew from the coastal city of Livorno that can include multiple varieties of fish and shellfish. Though the original traditional recipe uses 13 types of seafood, today’s version of the dish can still have about six to eight.

After the main course, diners can relax at the table with an espresso, ordered as “un caffe.” There may be little room for dessert after the filling meal, but the traditional castagnaccio cake made with chestnut flour might make you change your mind. Don’t let its thin appearance fool you; the cake is quite dense. Recipes vary by restaurant, but castagnaccio can also include raisins and pine nuts and can either be served warm or cold. Another classic dessert is cantucci, Tuscany’s twice-baked biscotti. The hard almond cookies are usually served with Vin Santo, a sweet dessert wine ideal for dunking.

Some say gelato has its origins in Florence. Whether that’s true or not, you don’t need a reason to eat gelato while in Tuscany – or anywhere in Italy, for that matter. You can see what the restaurant has to offer or walk off some of the meal in search of a gelateria that can delight you with multiple choices and fresh flavors.

Tuscany is wine country, and its own wines make the best pairings for your Tuscan meals. Many local wineries welcome visitors to discover their vineyards and enjoy tastings. The magnificent views of the rolling hills are a bonus along the way. Chianti and Chianti Classico, from vineyards between Florence and Siena, are perhaps Tuscany’s most well-known red wine choices, but other red options include Vino Nobile Montepulciano and Brunello di Montalcino. For those who prefer white wine, try the Vernaccia from San Gimignano.

The region is also known for its olive oil, which will surely be used in the meals you enjoy during a stay in Tuscany. The olives are generally picked by hand from trees located in various locations throughout the region, including near Siena.

There are some basic dining rules while in Italy that differ from those you may be used to in the U.S. Dinner in Italy starts late, with most restaurants not even opening until 7:30 or 8 p.m. Don’t expect butter for that thick Tuscan peasant bread because it simply is not served with it. Also, a per-person fee for the bread and a service charge may be added to the bill.

Taste your way through the region with the Spotlight on Tuscany itinerary from AAA Member Choice Vacations. 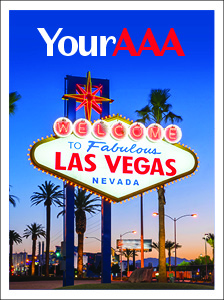 Ostia Antica was once Rome’s main seaport. Today it just may be the best archaeological attraction you never heard of.