If you visit Bristol, R.I., be prepared: You might never want to leave. 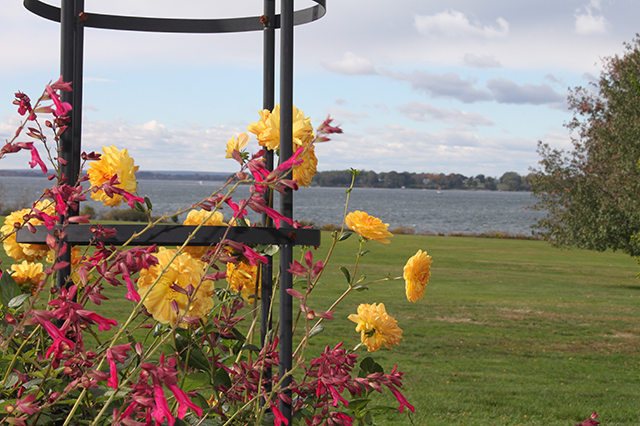 If you visit Bristol, R.I., be prepared: You might never want to leave. Love at first sight is a familiar story in this seaside town. Many a vacationer has become an entrenched community member.

Among them was Anthony Quinn. The famous actor, artist and writer chose Bristol to live out the last years of his life. He was so enamored of his waterfront property that he is buried there and left a prolific art collection, including many of his own works.

Bristol is a bastion of U.S. patriotism. Its main roadway, Hope Street, is striped in red, white and blue year-round, an homage to its annual Fourth of July Celebration. Dating to 1785, the festivities are said to be the longest-running Independence Day celebration in the U.S. They last three weeks and culminate in an impressive parade.

The peninsula town is situated between two bays – Narragansett and Mount Hope – and nestles Bristol Harbor near its middle. So, it’s no wonder the sea has historically been a mainstay in town life.

Colt State Park is 464 acres of grassy hills, peaceful coves, sweeping water views and a shoreline for swimming, fishing and other activities. A paved bike path circles the property and is an attractive detour from the East Bay Bike Path, a 14.5-mile paved connector between Providence, R.I., and Bristol.

With all of that going on, it’s hard to believe that there is even more to do in this 10-square-mile community (20 miles with the harbor) – but there is.

Linden Place– Bristol Art Museum: Bristol can’t deny its involvement in the slave trade, but perhaps poetic justice was meted out at this 1810 Federal mansion. Gen. George DeWolf built this house above his means hoping to gain fortune in the already illegal trade. He lost it in financial ruin that also took down most of the town. His and other stories of some former residents and guests will hold you enthralled on this tour. Famous among them were actress Ethel Barrymore and four U.S. presidents. The art museum takes up the carriage house.

Mount Hope Farm: The history of this property can be traced back more than 300 years to King Philip, the sachem of the Wampanoags infamous for King Philip’s War, a series of deathly Indian uprisings across New England in the late 1600s. Each subsequent generation brought more noteworthy occupants. Today, the 127-acre property on Mount Hope Bay is operated by the Mount Hope Trust and is on the National Register of Historic Places. Besides the glorious views from a network of trails, enjoy the local farmers market every Saturday for local produce and products, sheep shearing and other demonstrations.

Blithewold Mansion, Gardens and Arboretum: The 1908 45-room mansion is styled after a 17th-century English country house and features the heirlooms of the Van Wickle family, its original owners. The 33-acre grounds overlook Narragansett Bay and are impressively manicured and naturally partitioned into a number of different gardens. Each garden bears a marker explaining its origin or a historical note. The property hosts programs all year long.

Bristol is also home to the Audubon Society of Rhode Island’s Environmental Education Center and the Herreshoff Marine Museum – America’s Cup Hall of Fame and the Coggeshall Farm, a 1790s living history museum.

The Hope Diner: Get a heaping helping of local flavor for breakfast or lunch. Dishes like chourico hash, linguica omelets and sweet bread French toast are influenced by Bristol’s large Portuguese population. Choose a seat at one of the tightly packed tables or at the counter overlooking the grill.

DeWolf Tavern: Outdoor seating overlooks busy Bristol Harbor. Indoor seating is in a 1818 building handsomely restored to highlight its storied past. Chef Sai Viswanath’s inspired menu is an ode to the abundance of locally caught seafood with a hint of Indian – he cooks in an intensely high-heat charcoal tandoor.

Lobster Pot: Besides the requisite lobster – whether it be boiled, broiled, grilled, stuffed, baked into a pie or mac and cheese, served as a salad in a roll or many other ways – this restaurant offers New England classics like fish and chips and a fried seafood platter. The large dining room is lined with windows for a fantastic perspective of the setting sun over Bristol Harbor.

Read: “Anthony Quinn’s Eye: A Lifetime of Creating and Collecting Art” is heavy with photos of the late actor’s own sculptures, paintings and drawings as well as his vast collection of works by other artists and offers an insider’s perspective of his life through his widow, Katherine, and others.

Watch: “Hachi: A Dog’s Tale” was filmed mostly in Bristol and Woonsocket, R.I. Starring Richard Gere, it is a touching story of a dog’s devotion to his adopted owner.