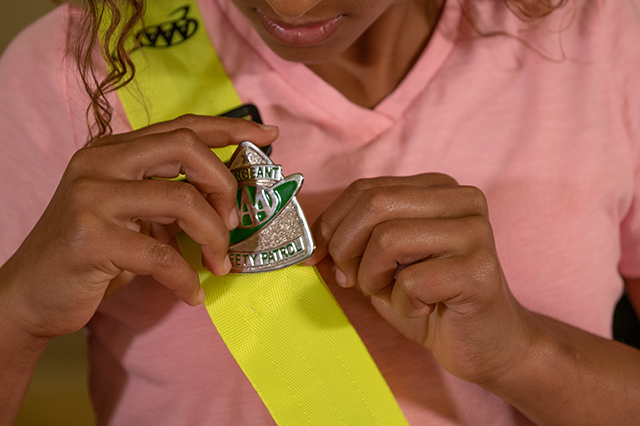 For a century, the AAA School Safety Patrol program has served as a training ground in leadership for young volunteers, many of whom go on to become pillars of their community.

Founded in 1920, the program activates students intent on helping their classmates arrive and depart school safely each day, with the help of law enforcement, teachers and crossing guards. What began as a boys-only program in the 1920’s quickly evolved into a community resource for any student to learn about good citizenship and responsibility.

Many of the nation’s leaders, including President Bill Clinton, Vice President Joe Biden, and Supreme Court Justices Anthony Kennedy, Clarence Thomas and Stephen Breyer, got their start in public service through the program.

We recently sat down with an alumnus of the program, AAA Northeast member Karen Guilbeault, who recently retired as Captain of the Cranston, R.I., Police Department after a career of over 30 years in public service.

Guilbeault is the first female in the history of the Cranston Police Department to graduate from the FBI National Academy in Virginia – an exclusive program where law enforcement personnel study to enhance their credentials and advance in their field. She has also worked for the Rhode Island Department of Children, Youth, and Families. And she credits the program as a starting point of a remarkable career.

What made you decide to join the AAA School Safety Patrol, and how long did you serve?

My parents led by example. My mother was a teacher in the same school district, and my father was very aware of the need to give back to the community. So, this was my first opportunity to get involved in my community. I believe I served in grades 5 and 6.

My house was one of the farthest from the school, over a mile each way, and I walked to school every day. Believe it or not, we did walk uphill! So, I think part of the reason they selected me was because I had to walk to school and I was focused on safety.

What lessons did you learn from being on the Patrol?

In my career as a high-ranking official, I always took my employees’ well-being very seriously – overall, not just at work. And I always tried to go the extra mile to make sure everyone was safe, particularly in domestic violence-type situations, for example.

You had a long, decorated career in law enforcement and public service. Did your time serving on the Patrol inspire you?

My personality was already formed at that age and I like to take charge of a situation when I can. I like to have a say in the outcome of a situation. And if I can use that to have a positive outcome, I’m going to do it. This was my first true exposure to responsibility. My mother always said, “Make a place better when you leave than when you found it,” and so I try to live by that every day.

I like to believe I was a catalyst for positive change in the Cranston Police Department. I was the first female to achieve the ranking of lieutenant and captain in the department, so I hope that paves the way (and sets a good example) for females looking to pursue a career in law enforcement. In addition, I was the first female from Cranston to attend the FBI National Academy in Quantico, Va., a program that less than .1% of police officers nationwide get chosen for. I hope that my experiences provide a good example to younger people, especially females, as they think about their careers.

Do you have any advice for children enrolled in the Safety Patrol program today?

It’s a serious responsibility – even more so today than when I was a child. The kids walking to school today are at a higher risk than we were. Cars are faster and quieter, and there’s the possibility of distracted drivers on their cell phones. So, the AAA School Safety Patrol is needed today more than ever before. Any time someone agrees voluntarily to be a part of something, especially a safety program, they should take it seriously. Their agreement to be responsible can positively or negatively affect someone else’s well-being.