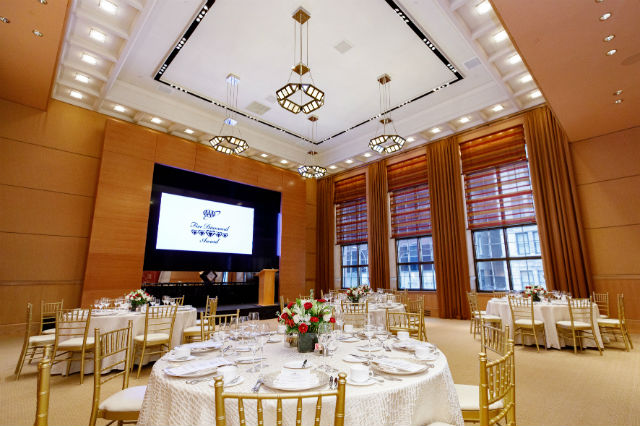 From Champagne toasts to shining plaques, spring 2019 has been a season of sparkling celebration as AAA Northeast hosted the best-of-the-best in hospitality at AAA Four and Five Diamond Award luncheons throughout the region.

Established to help members find quality places to sleep and eat while on the road, hotel and restaurant inspections have been a AAA tradition since 1937. AAA Four and Five Diamonds Awards denote properties of the highest caliber, based on the standards set by AAA’s rigorous and always-evolving inspection process.

“This is a very important program to us nationwide and one we are very committed to and will stay committed to for the long term,” said President and CEO of AAA Northeast, John Galvin at the New York City event.

At this year’s award ceremonies in Providence, Boston, New York City, New Jersey, Connecticut and Lenox, Mass., the hosts became the hosted. Gathered with their peers, local hotel and restaurant managers, chefs and other industry professionals were given the time to share a meal, talk shop and recognize their accomplishments.

For several establishments, it was their first time being named as Four or Five Diamond. All other recipients are perennial. Earning your spot among the top takes work, but maintaining it – especially on the Five Diamond level – is a true example of dedication and diligence.

The Five Diamond is an elite and hard-earned designation. Five Diamond hotels make up only .4 percent of 27,000 hotels inspected yearly. Restaurants that hold the title represent just .2 percent of 32,000 inspections.

Notable but not surprising, New York City has the highest concentration of Five Diamond properties in the country.

This year’s luncheon was hosted by the Four Seasons New York in their stunning Fifty7 West ballroom. The city’s longest-standing Five Diamond hotel, they have been taking home the award since 1994.

If you have the opportunity to walk through the IM Pei-designed space surrounded by its signature limestone or are fortunate enough to stay in one of the hotel’s rooms (all suites), it’s not hard to see why. It’s simple, calming elegance and amenities, including an on-site spa, set the bar in luxury and exemplify the Five Diamond standard.

“We are very proud to carry the Five Diamond Award for 25 years. It’s always wonderful to meet and be able to congratulate other industry leaders as well as accept the award for the hotel,” said Michal Dedera, Four Seasons New York’s hotel manager.

In the restaurant category, Atera’s intimate setting, carefully-crafted, two-hour plus tasting menu and dazzling presentations earned it its first Five Diamond Award. As noted in the AAA inspector’s rating, the courses are “visually unlike anything else in town.”

Diamond Awards in Providence, Boston and Beyond!

Other standouts in the region include Four Diamond Rated Italian seafood restaurant Due Mari in New Brunswick, N.J., and Winvian Farm and its adjoining restaurant continue to represent Five Diamond luxury in Morris, Conn. since 2010 and 2011, respectively.

Congratulations to all of this year’s Four and Five Diamond Award recipients!

See this year’s full list of Four and Five Diamond hotels and restaurants.