For the grand prize winner of the AAA Game Day Sweepstakes, the Aug. 11 New York Yankees game was one for the books. 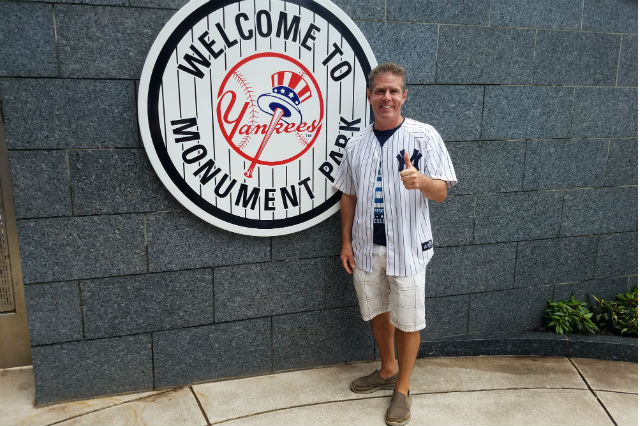 Glenn DiResto has been to hundreds of baseball games. An avid New York Yankees fan, he has walked onto the field of Yankee Stadium, toured the clubhouse and even stayed for an entire 18-inning game. But watching from the cushy seats of a luxury suite? That was a first.

As the grand-prize winner of the New York Yankees AAA Game Day Sweepstakes, DiResto spent the Aug. 11 game against the Texas Rangers enjoying exclusive stadium access and all the perks of a private suite with nine of his friends.

“I’ve been to a lot of stadiums throughout the country,” DiResto said, explaining that a friend who played for the Detroit Tigers would often show him behind the scenes. “(But) whether the old (Yankee) stadium, the new stadium, or any stadium, I’ve never been in a suite.”

It was not the typical baseball game. There was air conditioning, as well as cozy couches and multiple screens on which to watch the game. No need to flag down peanuts and hot dogs – a constant flow of catered stadium food and fancier fare flowed throughout the day. And right outside the door, covered box seats offered an excellent vantage point of left field, so that even the day’s sporadic thunderstorms couldn’t dampen the mood.

All of that plus the opportunity to sit in on a pregame press conference and tours of both Monument Park and the New York Yankees Museum. Not bad for simply enrolling in AAA automatic membership renewal. Those who enrolled from opening day through July had their name thrown into the baseball sweeps hat.

The retired NYPD lieutenant from Rockaway Beach, Queens, admitted that he was a bit skeptical of his win at first, saying that when he first got the message it sounded too good to be true. But after a bit of detective work, he was “more than ecstatic.” And with nine extra tickets to spare, it was a win for everyone. “My friends were really happy, too!”

In Boston, a member enjoyed an equally unforgettable experience at Fenway Park.

Rounding out the day, the Yankees won 5-3. Even with the threat of a rain delay looming throughout the game and a tie in the seventh inning, the Yankees took the lead with a home run by third baseman Miguel Andujar and held onto it until the end.

“It’s been a great experience. I got to see the luxurious side of going to a baseball game as opposed to the traditional baseball, rowdy, hot dog and beers,” said DiResto. “I’m a little older so I appreciate it a lot more.”

Like all good things, it ended too fast. If any fans nearby heard a “Let’s go Rangers!” at the top of the ninth it was DiResto, hoping for the chance to stretch the game a bit longer.