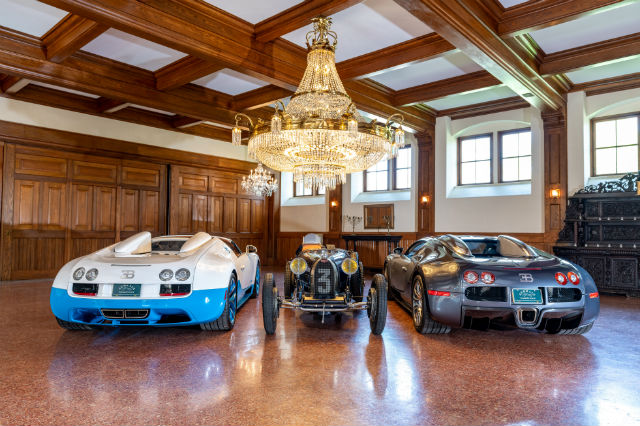 Newport, R.I., will be home to the inaugural Audrain’s Newport Concours & Motor Week, a four-day automotive extravaganza celebrating history, sport and luxury from Oct. 3-6, 2019, in the city that was the birthplace of American motorsports more than a century ago.

In addition to ticketed events at some of Newport’s most well-known locations, there will be free, family-friendly automobile displays on the lawns of the famed Newport mansions, celebrity symposiums with appearances from former “The Tonight Show” host Jay Leno and others, plus a concert featuring Grammy award-winning musician John Legend at the International Tennis Hall of Fame.

Organizers are expecting anywhere from 50,000 to 150,000 people per day at what is quickly shaping up to be one of the top automotive events in the world, said Rich Schad, director of the Audrain’s Newport Concours & Motor Week.

“With so many historic firsts, including the first automotive race in America, we felt that Newport is historically the best place in the United States – if not the world – to hold a motor week,” Schad said. “People are excited to finally have an event like this on the East Coast and it is important to us that we make this something special for many, many years to come.”

The weekend’s flagship event, the Concours d’Elegance (French for “competition of elegance”), will feature 100 of the most extraordinary vehicles ever built on the grounds of The Breakers. The lucky winner will receive a trophy sculpted by world-renowned fine artist Brian Life, who shaped the prize in the likeness of a red Mercedes that once belonged to famous Newport socialite William K. Vanderbilt II.

When the events get rolling, Newport’s International Tennis Hall of Fame will also be the host of the Concours Village, where visitors can enjoy concessions from local food vendors, as well as a classic car auction, memorabilia, car displays and the John Legend concert Friday night.

A $30 ticket to the village ($15 for ages 7-17) also includes admission to the world-famous Audrain Automobile Museum, which will have installations throughout the week, including $200 million in prototype cars on display from General Motors, Schad said.

“When we planned this event, we wanted it to be approachable and welcoming to all,” Schad said. “We are very hopeful that it is going to appeal to a large audience and bring so many people to Newport, and we wouldn’t have so many world-class sponsors if we weren’t confident that this is going to be an extraordinary week.”

Organizers also hope to appeal to younger crowds and families with the first-ever 30 under 30 class, developed by Jay Leno . Sponsored by AAA Northeast, the 30 under 30 class will showcase projects from automotive hobbyists younger than 30 years old who have not spent more than $30,000 on their vehicles. Its purpose is to encourage the next generation of car collectors and show them that you don’t need millions of dollars to make automobile restoration a hobby, Schad said.

Newport’s racing history dates to 1900, when Vanderbilt – whose family built and owned The Breakers – faced off against other Newport millionaires in the first Vanderbilt Cup at Aquidneck Park horse-racing track (now the site of the Newport State Airport). The city has an affinity with luxury sports and has also hosted the America’s Cup, the U.S. Amateur Gold Championship and the first-ever Summer X Games in 1995.

Other beneficiaries include local veterans, seniors, local police and fire departments, museums and the historical societies and infrastructure throughout Newport and Rhode Island.

Whether you’re a total gear head, a classic car lover or simply someone who would love to have a great time on the spectacular Rhode Island coast, Audrain’s Newport Concours & Motor Week has something for everyone.

Plus, AAA members will be able to save 10% on most tickets to this all-new event by calling the Audrain Automobile Museum at 401-856-4420.

Whichever package you choose, you’ll want to order your tickets and book your hotel room soon – word is spreading and car lovers from around the world are coming to be part of what will likely become one of Newport’s most celebrated new traditions.

Book a hotel in Newport for the event.

Will you be attending? Tell us in the comments.