Automotive Innovations That Were Ahead of Their Time

We take many automotive innovations for granted – seat belts, airbags, even turn signals. Who deserves credit for these breakthroughs? You may be surprised. 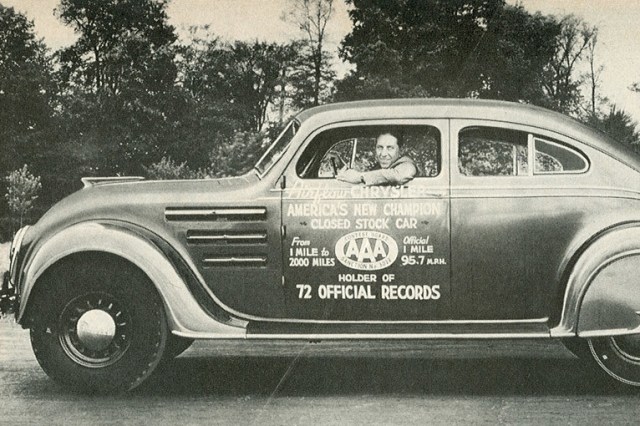 Automotive innovation has certainly come a long way in 100 years. What started out as a wood frame with four wheels and an engine has become a technological marvel and a haven for modern innovation. Some of the most advanced models today cost more than the average price of a home.

There are certain names and brands that come to mind when you picture the history of the automobile. Henry Ford, the Dodge Brothers, Chevrolet, to name a few. When placed under a magnifying glass, however, automotive history has many other contributors that are often forgotten or not given credit for their major contributions.

We take so many features in today’s automobile for granted – seat belts, antilock brakes, airbags and even turn signals. Who deserves the credit for these breakthroughs? Let’s take a look.

The company was suspected of fraud by the Securities and Exchange Commission, which had small, start-up automakers under a magnifying glass at the time. However, Preston Tucker suspected that the Big Three automakers played a role in his company’s demise because they may have been threatened by his car’s fresh new design and safety advancements, many of which were ahead of their time.

Some of Tucker’s safety advancements paved the way for modern-day safety standards, such as a padded dashboard (to reduce injury in the event of a crash), a windshield that could pop out on impact (also to reduce potential injury) and even a headlight that could move with the steering wheel for increased visibility when turning (known today as ‘adaptive headlights’). The prototype Tucker car also featured innovative front and rear seat belts. However, the seat belts never made it to production because the company felt, ironically, they made the car appear unsafe.

While Preston Tucker’s dream didn’t make it to mass production, his contributions to the automotive industry should be remembered.

Looking for more on the Tucker story? Check out the 1988 movie “Tucker: The Man and His Dream” starring Jeff Bridges. The AACA Museum in Hershey, Penn., also features an extensive Tucker collection and exhibit, as well as periodic meetups of Tucker fans.

The electric car doesn’t have a single creator but rather is the result of a series of inventions. The construction of the first battery-operated vehicle in the United States can be attributed to William Morrison, an inventor working in Des Moines, Iowa, in 1887.

The vehicle could seat 12 people and move at a walking speed or cruise up to a hair-raising 20 miles per hour. Morrison produced 12 prototypes of his vehicle, none of which exist today. Morrison showcased his vehicle in parades and even claimed that it was the “first successful practical passenger automobile in the world” and offered $5,000 to anyone who could prove otherwise.

However, with the onset of Ford’s Model T and the assembly line production of gasoline cars, the gasoline engine became more popular in the early 20th century, lessening demand for the electric automobile.

Thomas Edison is celebrated for inventions such as the lightbulb, but he has more of a connection to the automobile than many realize. He and Henry Ford were well-known friends. Ford was working for Edison at the time he developed his Quadricycle in 1896 and Edison encouraged him to pursue his plans for automotive design and production.

A few years later, Ford had launched his automobile company and Edison was researching and developing battery storage technology. Edison convinced Ford to collaborate on a battery-powered vehicle, which Ford admitted to the New York Times in 1914.

While rumors circulated throughout 1914 as to the status of the vehicle – how much it would cost, the mileage range, etc.- the vehicle never made it to production and Ford focused instead on gasoline-powered automobiles, specifically the Model T.

A few prototypes of these vehicles reportedly have been built but never saw the light of day.

Signaling Toward the Future

It may surprise you that it wasn’t an inventor or engineer that designed the turn signal – it was an actress.

Florence Lawrence, who acted in over 250 films, was an automobile enthusiast who was privileged enough to own a car at a time when only the wealthy could afford them. Trying to come up with her own way to improve the automobile, she invented the ‘auto signaling arm’, which was the early version of a turn signal. This consisted of an arm attached to the rear fender that could be raised or lowered by buttons to indicate the driver’s intention to turn.

Flowing With Innovation: The Chrysler Airflow

The Airflow packed in many innovative features. For starters, the cabin was placed between the axles (instead of on top of the rear axle) to ensure a smoother ride and maximum comfort. The car also featured unibody construction, which would help ensure maximum safety in the event of an accident.

The Airflow also had an available in-dash radio system with automatic volume control, which would raise or lower the volume according to the speed the vehicle was traveling. Many cars today don’t include this feature.

In addition, aerodynamic design greatly improved fuel efficiency and AAA was there to bear witness.

Harry Hartz, a retired professional race car driver, was accompanied by a AAA representative for a publicity stunt in August 1934, in which an Airflow was driven from Los Angeles to New York to test fuel efficiency. AAA even chose the vehicle off a showroom floor to ensure the vehicle was entirely stock. On the trip, they achieved an average 18 miles per gallon and burned just 2.5 quarts of oil – an amazing feat for a vehicle at the time.

Unfortunately, because customers didn’t see the need for these features, sales of the Airflow were disappointing and automakers didn’t think the upgrades were necessary on future cars.

What automotive advancement do you appreciate the most? Tell us in the comments below!

4 Thoughts on “Automotive Innovations That Were Ahead of Their Time”