How To Dig Your Car Out From the Snow

You'll inevitably need to dig out your car from the snow in the winter. Here's how to do it properly.

Everyone loves a winter wonderland – until you have someplace to be, in which case snow quickly goes from being picturesque to burdensome. This is especially true when trying to dig your car out from the snow.

Freeing your vehicle of snow and ice might seem like a straightforward enough task, but the process contains plenty of pitfalls. Plus, if you do it incorrectly you can damage your car. Here’s how to get the job done correctly.

You’ll need at least two tools to effectively dig your car out from the snow: a shovel to dig out a path for your vehicle and a snow brush to remove snow from the car itself. Do not use a shovel to clear snow off of your vehicle – it will scratch the car’s paint and glass.

Other helpful tools to have on hand are an ice scraper to clear off your windshield and a stepladder to deal with any snow on the car’s roof (if your vehicle is taller than you).

Looking for the right snow removal tools? We’ve compiled a list for you right here.

With your tools in tow, head out to your car. First give yourself some room to operate. Shovel a path around the perimeter of your vehicle. This will make it easier to work and also provide space to rock the car back and forth if and when you get to that stage.

If you’re waiting until a snowplow comes by in hopes it clears a path for you, remember oftentimes plows just pile more snow up around the car, particularly if you’re parked on the street.

Start at the Top

Once you’ve dealt with the snow around your vehicle, it’s time to tackle the snow on your vehicle. Start at the top and move your way down.

Don’t leave snow on the roof of your car – it’s a serious driving hazard. Snow can fall onto your windshield and block your line of sight, or backward onto the road, posing a threat to motorists behind you. As tempting as it may be to use the long arm of a shovel to get snow off your car’s roof – don’t. You’ll just end up with a scratched car. A snow broom or soft-bristled brush is best tool for the job.

Clear the Doors and Tailpipe

Your next goal should be getting inside your car. Make sure your tailpipe is clear of any snow before turning on your car. There needs to be enough space around the tailpipe for exhaust fumes to escape. If there’s not, the fumes could back up into the car’s cabin and lead to fatal carbon monoxide poisoning.

Once the tailpipe is clear, you can turn the engine on and heat the vehicle, which will help melt any snow and ice on the windows. Try and get at least the driver’s door clear as early as possible. 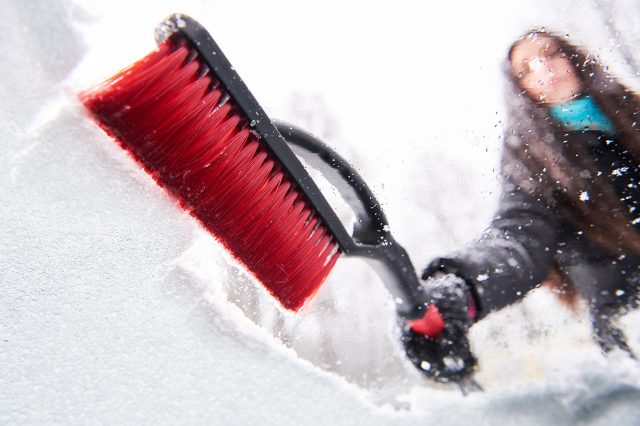 Clear the Windshield and Windows

Hold off on this job until you’re able to start your car since defrosters will make the task much easier. Clear off all the vehicle’s glass – don’t forget the sideview mirrors. Be sure the windshield wipers are able to move but be careful when freeing them. Wipers blades are fragile and a bent frame won’t be able to clear the windshield properly.

Get Your Car Moving

Congratulations! You’ve cleared the snow from your car. Now it’s time to lodge that vehicle loose from its frozen burrow.

First, remove as much snow as possible from in front and behind all four wheels. It’s easy for a car to get hung up on the snow under the car, so shovel and remove as much as possible. Many cars have spoilers, air dams and valances that can be all damaged by trying to “plow” through the snow.

Once you have the snow removed, it’s time to get out of your spot. Try to keep the front tires as straight as possible. Turning the wheels hard to one side will make it more difficult to push through the snow. Start by slowly backing up. Then step on the brake, shift into drive and slowly move forward. If that didn’t get you out, rock the car from reverse to drive, using the brake in between shifting from drive and reverse. Patience is the key here. Never spin the wheels wildly; it will overheat the transmission fluid and possibly ruin the transmission.

If you’re still spinning your wheels, try putting some kitty litter, sand, salt or ice melt on the ground to improve traction.

The hard work isn’t done once you’ve dug your car out from the snow. Winter driving can be extremely hazardous. Follow these tips to stay safe on the road.

Don’t forget to prepare for the season’s harsh conditions by winterizing your car.