Synthetic vs. Conventional Oil: Which Should You Use?

We get to the bottom of the synthetic vs. conventional oil debate one question at a time.

28 COMMENTS
Cars & Trucks » Synthetic vs. Conventional Oil: Which Should You Use?

Motor oil plays a critical role in keeping your car running smoothly. Its fundamental purpose is to lubricate the moving parts of the engine to prevent friction and overheating, which can cause major damage. But today’s motor oils do much more, such as keep the engine clean and protect it from wear and corrosion.

The improvement of motor oil is thanks in large part to the evolution of synthetic oil. Once used primarily in aircraft engines and high-performance vehicles, it’s now common for everyday car owners to opt for synthetic oil instead of its conventional counterpart.

But is it necessary to make the switch? What are the advantages and drawbacks? Here are the answers to all your synthetic vs. conventional oil questions.

What’s the Difference Between Synthetic and Conventional Oil?

Although they may appear the same to the naked eye, synthetic and conventional oil are significantly different when you get down to the molecular level. The latter is derived from refined crude oil. Synthetic, on the other hand, is an engineered product made from high-quality base oils. It comes in fully synthetic and synthetic blend varieties.

Both synthetic and conventional oils are mixed with additives to give them the optimal physical properties for lubricating a car’s engine.

Is Synthetic Oil Better For Your Engine Than Conventional Oil?

Yes. Conventional oil is less chemically stable, causing it to break down and lose its protective qualities faster. Because synthetic oil is made from high-quality oil (opposed to the crude oil found in conventional), it is more chemically stable, allowing it to better retain the physical properties needed to properly lubricate a car engine.

In general, using synthetic oil will allow for longer intervals between oil changes. However, this is highly dependent on the brand of synthetic oil you use. Brand recommendations can range anywhere from 3,000 to 20,000 miles. Other factors, such as such as driving style and conditions, will also affect how often you need to change your oil.

No matter what kind of oil you use, always follow the oil change frequency recommendations in the vehicle owner’s manual. 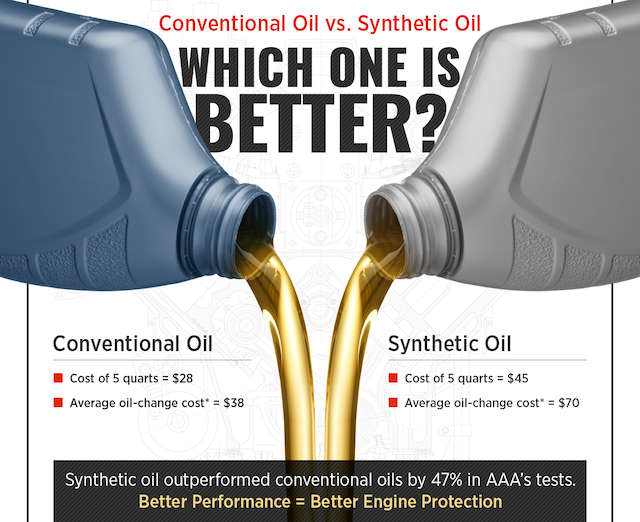 Up until this point, synthetic oil seems like the clear winner. But the battle of synthetic vs. conventional oil isn’t over until you factor in the all-important price tag – and that’s when things start to shift. Synthetic oil is significantly more expensive than its conventional counterpart, sometimes up to twice as much. One AAA study found switching from a conventional oil to a synthetic oil will cost drivers on average $64 more per year, or an extra $5.33 per month.

This leads to the next question: Is synthetic oil worth the extra money? According to AAA Car Doctor John Paul, the answer is yes. “In my own cars, I have found by switching to synthetic oil I have had easier cold weather starts, quieter operation and a slight reduction in engine oil temperature,” Paul said. While conventional oil is capable of getting the job done, synthetic oil better protects your engine. This can more than make up the cost difference in the long run. The same AAA study found synthetic oil outperformed conventional oil by an average of nearly 50%.

In conclusion, switching to synthetic oil could be worth the money, especially if you tow heavy loads or operate in extreme hot or cold conditions.

If you switch to synthetic oil, you can never switch back to conventional because it will damage the car’s engine.

False: In most cases, synthetic oil uses conventional oil as a base stock, so switching back and forth will cause no harm.

Synthetic oil will cause my engine to leak oil.

False: Synthetic oil is an excellent detergent cleaner and can wash away oil sludge, which may uncover a previous leak that was being blocked by the sludge. Synthetic oil will not cause any leaks if your car is reasonably well-maintained.

All synthetic oil blends are the same.

False: There are no standards when it comes to the ratio of synthetic and conventional oil that comprises synthetic blends. The blend could contain 50% synthetic oil or 5% and there is no way of knowing.

Learn more about proper automotive care. Still have questions? Leave them in the comments below.

28 Thoughts on “Synthetic vs. Conventional Oil: Which Should You Use?”