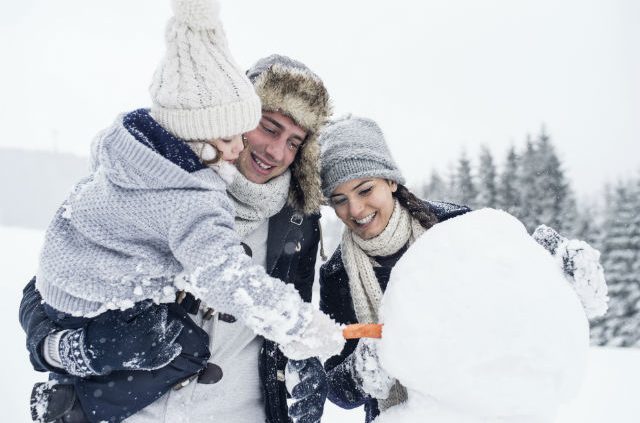 How to Build a Snowman

The most important (and most unpredictable) part of building a snowman is snow. Any amount of snow will make your neighborhood look like a winter wonderland, but not all types of snow are good for building a snowman.

Powdery, loose snow is pretty, but it’s not very packable. Any kid who’s tried to have a snowball fight with the stuff knows that powdery snow is pretty much useless.

The classic snowman is three snow-spheres piled on top of each other. For your base, start by forming a snowball in your hands. Place the snowball on the ground and begin rolling, picking up snow as you do so. Make sure you tilt the snowball around as you’re rolling it, so that it doesn’t turn out to be a cylinder. As you roll, be careful not to pick up any grass or dirt, lurking just below the snow. Once it’s big and round, roll it to the spot where you want your snowman to stand. You can build a snowman on concrete or asphalt, but it will melt faster than it would on grass.

The second sphere, or the snowman’s torso, should be a little smaller than the base. Try to lift it up and place it on the base, instead of pushing it up the side. This will make your snowman more symmetrical. The head, as the smallest sphere, is the easiest to roll – you could even pack it in your hands if you want.

You can’t let your snowman be faceless and naked! To make sure you have the best snowman on the block, he needs features and accessories.

If you have coal (maybe you have a grilling fiend in the family) it’s the classic choice for snowman eyes and buttons. But not everybody has in-home access to coal. Buttons or stones are a great alternative.

Classic snowman noses are usually carrots. Even baby carrots can give your snowman that iconic pop of orange. But you could use just about anything to make a snowman’s nose. Get creative! You could use a wine cork, a spoon, a twig, a Popsicle stick, a pine cone and much more.

Another great idea for a snowman nose is to use an icicle. Carefully snap an icicle from the edge of your roof and lodge it in the snowman’s head like you would a carrot. This makes the nose look almost like an organic part of your snow creation.

The best way to craft snowman arms is by using sticks from nearby trees. It helps if the stick has a few different little branches at the end, like fingers.

Now it is time to dress your snowman. Use clothes that you wouldn’t mind getting wet or even ruined (you are going to be leaving them outside in the snow, after all). The most fashionable snowmen have winter hats and scarves. If you use an old silk top hat, there is a small risk that your snowman might come to life.

If you’re not willing to use some of your own clothes (or vegetables), there are a ton of snowman-decorating kits available online. They’ll make your snowman picture-perfect.

If you want to add some color to your snowman, the nontoxic way to do that is by using food coloring. Dab some on your snowman’s face to give him blushing cheeks, or mix it up in the snow for a tie-dyed snowman. Be warned: this stains.

Snow is fun all on its own, but these snow accessories and toys will keep your kids entertained for hours. 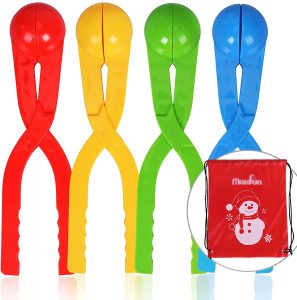 If you’re going to have a snowball fight in your yard, you’d better be ready. With the Max Fun 4 Pack Snowball Maker Snow Toy, the act of making snowballs becomes a fun activity all its own. These tools make a perfectly round snowball in less than one second. Don’t get caught in the middle of a snowball fight without any ammo! Buy it here. 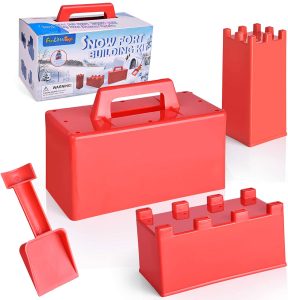 Have you been itching to build a snow fort? With the FUN LITTLE TOYS 4 Pieces Snow Toy Molds, you and your kids can make bricks of snow that are ready-to-use for your fort-building purposes. During the warmer months, they can also be used to build sandcastles. Buy it here. 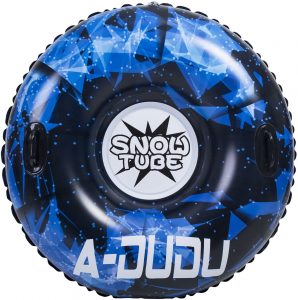 Snow days just aren’t the same without a little bit of sledding. The A-DUDU Snow Tube is a huge, 47-inch inflatable snow sled that can handle a full day of snowy fun. This heavy-duty tube can deflate for easy storage, and its two-layer design ensures that it can take a beating. Buy it here.

What’s your favorite thing to do on a snowy day? Let us know in the comments below!