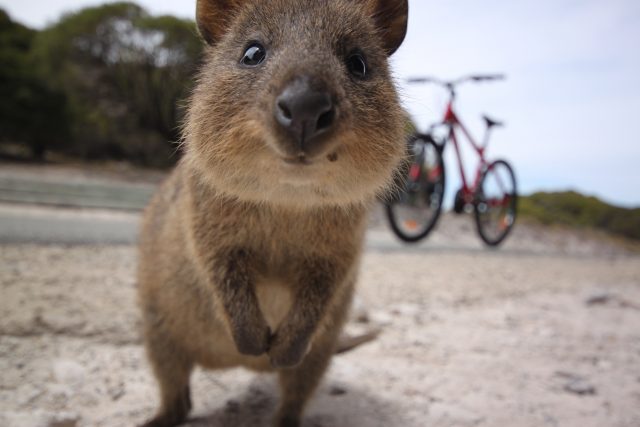 Only 300 people call Rottnest Island home but the quokkas really own the place.

The quokka – a smaller version of the wallaby – is the only mammal native to the island. In turn, Rottnest Island is just about the only place on earth where you’ll find these little marsupials.

And there are plenty of them to be found: at least 10,000 quokkas roam this area of just 7 square miles.

Rottnest also contains colonies of seals and sea lions as well as a rich array of birds. You can surf, hike, fish, sail, dive or bask in the sun on sandy beaches of crystal-blue water.

But all of it takes a back seat to the real stars of the show.

When 17th Century Dutch explorers touched down on these shores, they thought quokkas were giant rats. So they called it Ratnest Island (or Eylandt ‘t Rottenest)

But the island’s original inhabitants, the Whadjuk Noongaro, lived there more than 7,000 years ago – before it was even an island. After Rottnest separated from mainland Australia during the last Ice Age, the Whadjuk Noongaro named the new island “Wadjemup, or “place across water where the spirits are.”

Calling Rottnest a best-kept secret is a bit misleading, though. “Rotto” is an enormously popular daytrip with the denizens of Perth and its surrounding areas. But in a broader sense, West Australia in general – and Perth in particular – aren’t exactly celebrated tourist destinations the world over.

Known as the most isolated city in the world, Perth contains 2 million residents … and more ‘roos than humans for hundreds of miles. The nearest city of even 100,000 people, Adelaide, is over 1,300 miles away.

Still, its rugged beauty both inland and on the coasts makes Perth well worth the trip. It may not be as cool as Melbourne or as cosmopolitan as Sydney, but Perth’s natural treasure chest offers at least one gem those other places can’t.

The word “cute” is subjective, sure, but how can you not melt a little when you encounter a quokka?

About the size of a house cat (if cats walked on two legs), quokkas are nocturnal, stocky creatures with incredibly well-developed back legs and a knack for climbing. They’re herbivores who get their water mainly from chewing grasses and leaves.

Think of a deer’s demeanor wrapped in a playful package. Quokkas have the same black placid eyes and brown coat, and like a deer, there’s something good natured about them.

Maybe it’s because their mouths naturally curl into a contagious smile.

After years of entertaining curious tourists, the quokkas are quite curious and friendly themselves. It’s no surprise then that quokkas have become social media stars over the last decade, with Instagram accounts like @Instaquokka gathering more than 150,000 followers, and #QuokkaSelfie trending for a time.

If you try to take a quokka selfie, be warned: you shouldn’t handle them. It’s also a crime to feed them human food, as it can have a disastrous effect on their health. While they’re gentle, they are still wildlife and therefore relatively unpredictable. Their teeth, so cute in a smile, are razor sharp.

Rottnest is more than just the exclusive playground of quokkas.

One of the first things you’ll notice when you arrive is the silence, since there are very few cars on the island. Its biking and hiking trails are extensive and fantastic, as are the snorkeling and diving, fishing, surfing and swimming.

And it’s easy to get to Rottnest, just a 45-minute ferry ride, which leaves from Perth’s port of Fremantle, though other boat and aerial options are available.

The island has some history to explore, too, from ancient artifacts to its use as a Colonial-era prison/labor camp to remnants of Australia’s WWII defense system.

But ultimately, it’s those smiling little brown critters – animals you won’t meet anywhere else in the world – that make it such a special place.

Experiencing wanderlust? Visit AAA.com/Travel for plenty of info and inspo!

Where’s your favorite “best-kept secret” spot? Tell us in the comments below!