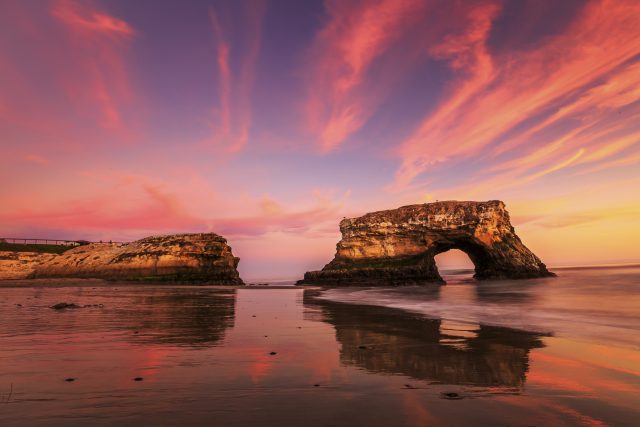 Santa Cruz County is nestled in the geographic shadow of San Francisco and San Jose.

And that’s kind of fitting because it’s often overshadowed, at least in popular culture, by those two wildly different siblings: one an artistic free-spirit and the other, Silicon Valley, a highly caffeinated entrepreneur.

But Santa Cruz presents a different vision of California. Here, you can surf and go mountain hiking in the same day, or explore ancient redwoods before riding a heritage railroad car to an iconic amusement park on the beach.

Santa Cruz is characterized by an unhurried pace, the epitome of Northern California cool, in contrast to San Jose’s hustle. It’s both agricultural and coastal, historic and progressive at the same time. Its city is quaint, unlike San Francisco, and the county’s expansive footprint and Mediterranean climate offer a dynamic range of outdoor activities.

Even wildlife knows it’s a special place: Butterflies and humpback whales stop there on annual migrations down the coast. And that’s where the tale of Santa Cruz starts, along the coast, where the city’s brand was seared into popular culture.

Ever since, Santa Cruz and surfing have become synonymous, have grown up together. The local newspaper coined the term Surf City in 1927 (a name that Huntington Beach unfairly co-opted decades later). And naturally, the city’s home to the world’s first surfing museum.

Calling Santa Cruz a “best-kept secret” is ridiculous to any surfer. Santa Cruz has 11 world-class breaks, meaning it has some of the best waves on the planet. It hosts surfing competitions such as the International Longboard Association Contest and the O’Neill Cold Water Classic – the latter a reminder that wetsuits were invented here. O’Neill Wetsuits was founded after local surfer Jack O’Neill experimented with material so he could stay in the water longer when it grew cold.

But surfing is just one facet of Santa Cruz aquatic life.

You can go whale watching pretty much any time of year. The humpback whale is an annual Monterey Bay visitor from spring to fall. And about 20,000 gray whales swim through these waters twice a year, from December to April.

Dolphins, sea otters and sea lions are also local denizens of the deep. And is there anything cuter than watching a sea otter go about its day?

As the presence of so much sea life would suggest, the fishing is pretty good, too. You can do the deep-sea thing, or head up to the mountains for freshwater fish or just cast a line off of the wharf.

The park, built along the northern shores of Monterey Bay, has been in operation since 1907. Two of its rides are registered National Historic Landmarks.

The Looff Carousel, operating since 1911, is one of only six carousels in the country with its original brass ring dispenser. The ride’s 324-pipe organ, separately constructed in the 1890s, is still intact.

Then there’s the Giant Dipper. Built in 1924, it’s one of the 10 oldest operating wooden roller coasters in the world. And it’s still thrilling visitors nearly a century later. Even by modern standards, it’s a great ride. The coaster peaks out at 70 feet and reaches 55 mph, and there are a few moments where your stomach will drop and drop again.

Taken together, the boardwalk is an experience all its own. While its architecture harkens back to a golden age, the park is no dusty museum. It’s still vibrant and a heck of a lot of fun for kids of all ages.

Natural Bridges State Park (named after the once-intact rock formations pictured at the top of this article) features more than just a gorgeous spot on the coast. The park’s Monarch Grove is home to migrating masses of butterflies from October through February.

There are so many butterflies at times that they form a sort of “living tree.” When you first lay eyes on them all huddled together on a branch, it looks like a mass of leaves – until each leaf flies away. The scent of eucalyptus trees permeates the grove and of course, the ubiquitous towering redwoods abound.

The redwoods and geography of Henry Cowell State Park are so stunning, they inspired President Theodore Roosevelt to hasten federal parkland initiatives. Old-growth redwood trees (some as old as 1,500 years) inhabit 40 of the park’s 4,650 acres, which also encompass grasslands, sand hills, and the San Lorenzo River. You may also bump into deer, bobcats, coyotes and of course banana slugs (which are, no joke, the official mascot of the University of California, Santa Cruz).

Hiking and mountain biking are also popular here given the miles of trails, and Henry Cowell is just one of many campsite opportunities. There are 14 state parks and beaches in Santa Cruz County.

Santa Cruz offers much more than sand, surf and redwoods. Its mountains are home to more than 30 wineries including popular Ridge Vineyards and Rhys Vineyards. And the city’s downtown is packed with public art, live music venues, bars, restaurants, small shops and occasional street performers.

There’s history to explore, too. The oldest human settlement, in nearby Scotts Valley, dates back 12,000 years. The Ohlones tribe settled along the coast about 8,000 years ago. And the city’s Chinatown as well as its nearby mission, offers some more recent history lessons.

Santa Cruz should be on any tourist’s California radar, even if just for a day trip. And getting there can be half the fun. From San Jose, you’ll drive through scenic mountains toward the coast.

And Santa Cruz is just a 90-minute drive south along the stunning Pacific Coast Highway from San Francisco. If you keep driving, Big Sur isn’t far behind.

Take the hassle out of travel and book an adventure today with AAA Travel!

What’s your favorite “best-kept secret” spot? Let us know in the comments below.