One of the best ways to explore China, Japan and Vietnam is on water. Which is the right cruise for you? 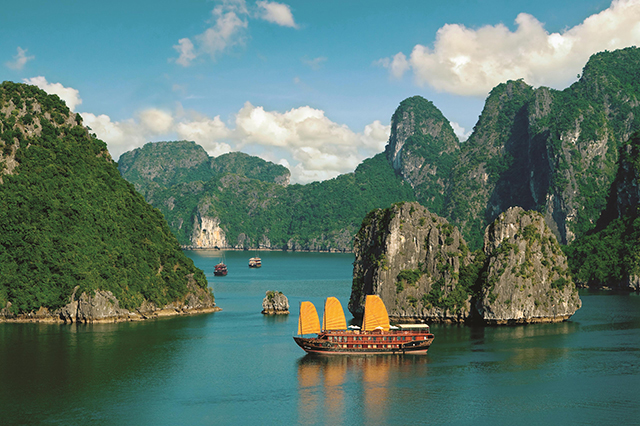 Because of their proximity to water, Vietnam, China and Japan lend themselves to be explored by ocean and river. An organized Asia cruise tour lets you travel in style without having to plan more than a flight. We’ve made it even easier for you by researching the best cruises through East Asia’s top destinations so that you’ll be hearing “all aboard” in no time.

Experience both modern and ancient China on a luxurious river cruise like Uniworld’s Highlights of China & The Yangtze River cruise, which allows you to explore Beijing and offers excursions to the Forbidden City, Beijing’s Summer Palace and the base of the Great Wall.

Other highlights include the dumplings in Xi’An, China’s first capital and the opportunity to see the legendary Terracotta Army that protects Qin Shi Huang, China’s first emperor, in the afterlife.

You’ll fly to Chongqing where you’ll board your ship and begin your cruise along Asia’s longest river – the Yangtze, sailing through picturesque canyons and sheer cliffs past the legendary Three Gorges and Goddess Stream.

Search for savings on river cruises with AAA.

Float through Japan with Celebrity Cruises

Aboard the Celebrity Millennium guests can dive into Japan’s history and modern culture. You could begin your expedition exploring the sights, flavors and sounds of Tokyo before boarding your ship in the evening. You’ll wake up to iconic views of Mount Fuji, the highest peak in Japan and one of the country’s most sacred landmarks.

Other experiences on your itinerary may include sampling steak in Kobe, known around the world for the marbled beef it exports; indulging in katsuo no takaki in Kochi, the city’s signature dish made of lightly seasoned, broiled bonito; and checking out the 6,000-year-old Sannai-Maruyama settlement ruins in Aomori,

Search for deals on Celebrity Cruises with AAA.

Sail through Vietnam on a river cruise

An eight-day voyage like on Ama Waterways’ Vietnam, Cambodia & the Riches of Mekong Cruise could begin in Ho Chi Minh City, also known as Saigon, where vestiges of French colonialism meet vestiges of the Vietnam War.

On day two you’ll take a local boat to Cai Be where you’ll have the option to visit a traditional historic home or local craftsmen in their workshops. You’ll then tour nearby Sa Dec, which was the inspiration for French writer Marguerite Duras’ novel The Lover.

Next, you’ll cruise to Tan Chau where you’ll be able to explore the town by boat or on a xe-loi –a three-wheeled rickshaw. In the evening your ship will cross into Cambodia.

On your first day in Cambodia you’ll visit the Killing Fields where Pol Pot and the Khmer Rouge communist party killed and buried more than a million Cambodians during the Cambodian genocide in the 1970s. After a grim morning, you’ll learn about brighter times in Cambodia’s history at the National Museum and Royal Palace in Phnom Penh.

The next morning you’ll explore the Cambodian capital by tuk-tuk before embarking to Koh Chen to visit a silversmith village.

On the sixth day, you’ll explore a Buddhist monastery in Oudong, Cambodia’s royal capital from the 17th until the 19th century.

On the penultimate day of your cruise through Vietnam and Cambodia, you will ride through the floating villages of Kampong-Chhnang and enjoy exotic bird watching. Your Mekong River cruise disembarks in Prek Kdam, Cambodia. You and your travel partners will never forget this Asia cruise tour through French Indochina.

Search for savings on river cruises with AAA.

Explore the best of East Asia with Holland America

The cruise embarks in Shanghai, China — the “Paris of the East.” Spend two days exploring this booming metropolis before reveling in the luxury of the MS Volendam during a day on the sea.

You’ll arrive in the Japanese port city of Fukuoka on day three, where you’ll be able to sample street food favorites from the city’s iconic yatai outdoor food stalls. Other stops along your journey around Japan include Nagasaki, Naha and Ishigaki Island.

On day eight you’ll arrive in Taiwan and will have free time to explore Taipei, the island nation’s booming capital. You’ll see a mix of modern skyscrapers and traditional temples in Kaohsiung the following day.

Next, you’ll have two days in Hong Kong to experience another mashup of cultures – British and Chinese.

After several days in densely-populated cities you’ll yearn for the tropical calm that awaits in Vietnam’s picturesque Ha Long Bay. Other stops in Vietnam include the imperial city of Hue, the resort town of Nha Trang and Ho Chi Minh – the city that never sleeps.

After a beach day in Sihanoukville, Cambodia, you’ll be ready for the hustle and bustle of Bangkok, Thailand.

Your month-long cruise will end in Singapore, the tropical city-state island where cultures and religions intermingle (Singapore has four official languages) and jaw-dropping architecture is the norm.

Search for deals on Holland American cruises with AAA.

Which cruise sounds most appealing to you? Let us know in the comments below.