You don’t need to go to the Caribbean to have a coastal vacation. Broaden your horizons with these seaside Asia destinations. 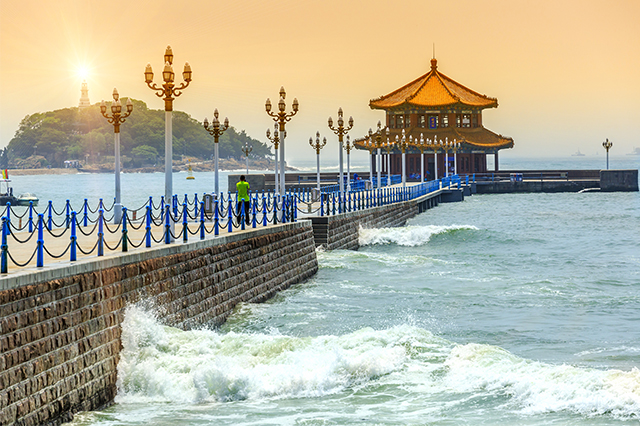 As China rises as a superpower, the country is also becoming one of the most popular Asia destinations for globe trekkers. While Shanghai, Hong Kong and Macau are already tourist hotspots, China’s other coastal cities are worth a visit while you travel in Asia. From metropolises to beach towns, we explain China’s coastal cities from north to south to help you expand your travel plans.

Located directly west of the Korean Peninsula across the Yellow Sea, the port city of Dalian should not be missed. Its name translates to “Great Link” because of its easy access to trade partners like Russia, Korea and Japan.

Dalian was actually founded by the Russians in the late 19th century, and their influence can be seen in some of the city’s architecture.

Named China’s most-liveable city in 2006, Dalian is a favorite of locals and tourists for its beautiful beaches.

While Dalian was founded by the Russians, vestiges of Qingdao’s German colonization can be felt through the city’s remaining German architecture and beer heritage.

Founded in 1903 by the Germans, Tsingtao Brewery is booming today and is China’s second largest brewery. If you visit in August, don’t miss the renowned Qingdao International Beer Festival, which is lovingly known as Asian Oktoberfest.

If beer isn’t your thing, you can soak up the sun at the city’s most popular – and aptly named – beach, No. 1 Bathing Beach.

China’s largest city, Shanghai, is a booming metropolis best known for its futuristic skyscrapers. The Oriental Pearl Tower is Shanghai’s most iconic building and can be seen from the historic Bund promenade across the Huangpu River.

As one of the top Asia destinations, Shanghai truly has something for everyone. Art lovers can explore the Shanghai Museum and China Art Museum for free. Shopaholics can pop in and out of shops along Nanjing and Huaihai Roads. Foodies can sample authentic Shanghainese dishes like bao dumplings and eel noodles (no General Tso’s chicken here!). The kids can enjoy the magic of Shanghai Disney Resort.

Just west of Taiwan across the Taiwan Strait is the Chinese city of Xiamen. Millions of visitors come to Xiamen each year to visit Gulangyu (also known as Kulangsu), a pedestrian-only island located five minutes from downtown via ferry. Not even bicycles are allowed on this tropical island, making it a unique destination.

East meets west on Gulangyu. The island was a popular place for western diplomats and businessmen to settle during the colonial period, each bringing their culture to the island, including music and architecture. The island is known for its tradition of classical music and Amoy Deco architecture – a Chinese take on European Art Deco (Xiamen is known as “Amoy” in the local Hokkien dialect).

While Hong Kong isn’t exactly part of China depending on who you ask (it’s technically an autonomous special administrative region of China), your travel in Asia wouldn’t be complete without a visit to Hong Kong. Not only is Hong Kong one of the most popular Asia destinations, it is also the world’s most-visited city.

The former British colony comes close to the top of several other lists, including most important ports and financial hubs and highest population densities. Hong Kong also outranks every other city in the world in the number of skyscrapers it has – 317 and counting.

To get the best views of these modern marvels, ride the tram up to the Peak, Hong Kong’s highest and most exclusive neighborhood. You’ll be hungry after soaking in these breathtaking views, so you’ll want to try some of Hong Kong’s famed foods, like dim sum and roast poultry. After the sun sets, head to Temple Street Night Market flea for some of the best shopping in the world. Travelers with higher budgets would be remiss not to have a bespoke suit made by one of Hong Kong’s famed tailors.

An hour-long ferry across the Pearl River Delta from Hong Kong will transport you to Macau, another Chinese special administrative region with its own flavor. Macau is known as the gambling capital of the world and the Las Vegas of Asia for its famed casinos along the Cotai Strip.

Macau was a Portuguese colony for almost 500 years under a lease from China and in in 1999 it switched back to Chinese sovereignty. The blending of Portuguese and Chinese cultures is apparent in the world’s most densely populated region — from the cuisine to the street names, languages and architecture.

If gambling isn’t for you, head south to Coloane Village for beaches and a slower pace, or north to Taipa Village for iconic Macanese architecture.

Hainan Island, home to the city of Sanya, is the island of nicknames. Some call it “China’s Florida” for the Chinese senior citizens that migrate there in the winter. Others call it the “Chinese Hawaii” for its renowned beaches and luxury resorts. Another moniker is “Moscow on the South China Sea” for its popularity with Russian tourists looking for a warm getaway. Whether you’re young, old, Russian, Chinese or other, the consensus is that Sanya is China’s premiere tropical paradise.

For a taste of the local culture after some fun in the sun, visit the Buddhist Nanshan Temple, which is marked by the towering statue of goddess Guanyin.

There’s much more to coastal China than Shanghai. We hope we’ve inspired you to add some of China’s other seaside cities to your Asia vacation plans. AAA makes booking your next Asian adventure incredibly easy.

Have you been to any of these coastal metropolises on your travels in Asia? Let us know in the comments below.