For your next wilderness adventure, check out our Yosemite National Park travel guide. 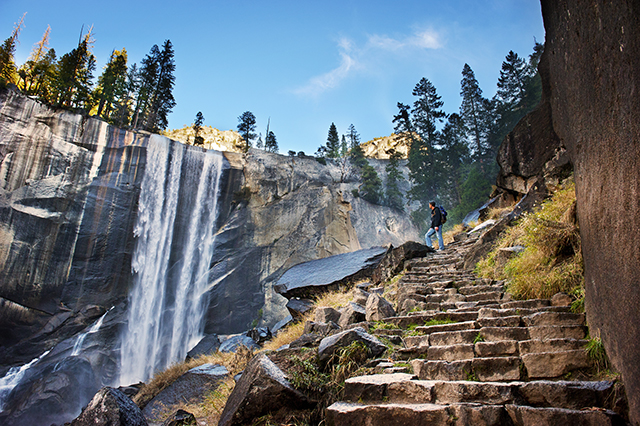 Yes, Yosemite National Park is open all year. Some roads are closed in the winter, and some entrances are not manned for the entire day in the offseason.

Most visitors drive their own cars and campers into the park. In addition, the park operates various shuttles around the Yosemite Valley as well as to trailheads, visitor centers and viewing areas.

Some of the popular activities in a Yosemite National Park travel guide include:

Pets are permitted only in the developed areas of the park: some campgrounds, paved roads and developed areas. They are not allowed in the backcountry or on trails.

There are paved recreational trails in the park that are accessible. In additional several of the hotel and campgrounds have accessible facilities.

Lodging in Yosemite National Park ranges from deluxe rooms in The Majestic Yosemite Hotels to comfortable motor inns to numerous campgrounds and rustic backcountry cabins. As with most national parks, reservations are strongly recommended for all types of accommodations, particularly during the summer months.

Are there restaurants in the park?

Dining options in the park include fine and casual restaurants throughout the park as well as several grocery stores. Picnicking is popular as well, though as in all wilderness areas, guests must be vigilant about storing their food in bear-proof containers and removing all trash from the park.

Which national park would you like to visit most? Is Yosemite National Park on your list? Tell us in the comments.