The frequently asked questions and answers that you need to know before planning an Acadia National Park vacation. 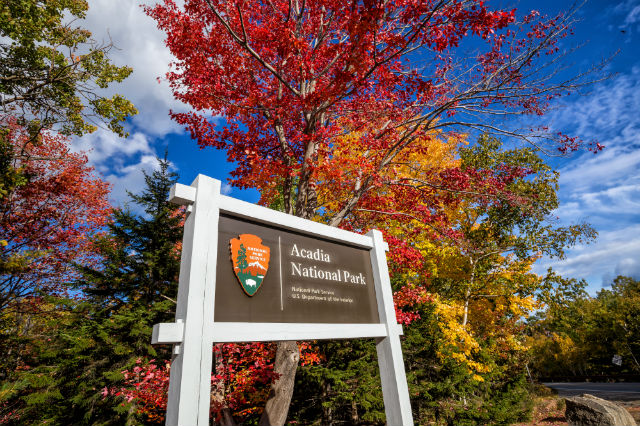 A scenic marvel of mountains, islands, forests and other natural wonders, there are many reasons why Acadia is one of the ten most-visited national parks in the county. And as the only national park in the Northeast, it’s a must-see destination for local nature lovers and explorers. Use this guide to Acadia National Park to help you plan your visit.

Yes, Acadia National Park is open all year. From mid-April to mid-October, the park’s visitor centers and other facilities are open; during the off-season (late October to early April) only the Park Headquarters is open for services.

Acadia National Park is located on Mountain Desert Island, Isle au Haut, and the Schoodic Peninsula on the east coast of Maine.

Most visitors drive their own cars and campers into the park. In addition, the Island Explorer bus transports riders to and from various places on Mount Desert Island, including the airport, park destinations and the local communities. During peak season it’s smart to utilize the Island Explorer service, as parking can be hard to come by.

Also, keep in mind that vehicles must display a park entrance pass while in the park.

Some of the popular activities in an Acadia National Park vacation package include:

Pets are permitted in some campgrounds, on 100 miles of hiking trails, and forty-five miles of carriage roads. They are not allowed on beaches, in public buildings or on ranger-led activities.

Several trails and carriage roads in Acadia National Park are accessible, as are some of the park’s main sites, such as Thunder Hole and Cadillac Mountain.

While there are no lodging facilities within Acadia National Park itself, the neighboring communities have numerous accommodations ranging from high-end hotels to less expensive motels. The park does have several campgrounds with spaces for tents and RVs. The surrounding area also has multiple private campgrounds with varying facilities.

Are there restaurants in the park?

Acadia National Park has one dining facility, Jordan Pond House, which serves lunch and dinner from mid-May until late October. Numerous restaurants and grocery stores can be found in the towns outside the park.

Which national park would you like to visit most? Is Acadia National Park on your list? Tell us in the comments.