Discover the Artsy Side of Westchester

This sophisticated New York county is full of creativity and charm.

0 COMMENTS
Road Trips » Discover the Artsy Side of Westchester 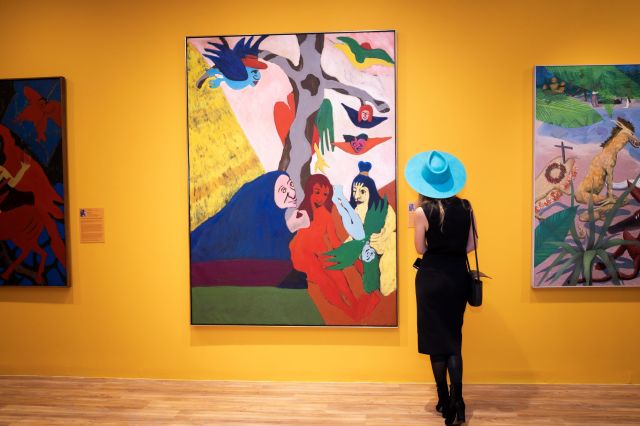 From music to award-winning theatrical performances, the county of Westchester, New York, boasts an exciting arts scene. There’s so much to do, in fact, that it may seem overwhelming to decide the best spots to check out.

Luckily, we’ve compiled nine of the top places to visit in Westchester to get your art on.

For those looking for history, music and beautiful architecture, you can’t miss Tarrytown Music Hall. As the oldest operating theater in Westchester County, it has seen the likes of Vanderbilts and Rockefellers in its heyday, showcasing silent films and hosting events like flower shows and even roller-skating tournaments. These days Tarrytown Music Hall offers all types of entertainment in its 843-seat auditorium, including blues, jazz, folk and classical concerts.

If the name didn’t immediately give it away, Jazz Forum Arts is the one and only club in Westchester County that’s dedicated to jazz music. Referred to as a jazz “listening room,” the Forum is a not-for-profit organization that seeks to give the gift of music to the public at little or no cost.

One of the Forum’s most popular events is the Monthly Jam Session where professionals and amateurs alike can come together in one space to play and discuss all things jazz. In addition to listening room shows every Friday, Saturday and Sunday, the Forum also hosts numerous events throughout the year. To add to the fun, there’s a full menu of delicious food at every show (including drinks and dessert) to enjoy while you watch and listen.

Caramoor Center for Music and the Arts

With its picturesque garden as a backdrop, the Caramoor Center for Music and the Arts is home to many enjoyable programs for the whole family. What began as an estate home built for Walter and Lucie Rosen in the early 1920s eventually became a hub for diverse musical performances and historical cultural significance. Some events you can enjoy at Caramoor include Christmas acapella performances, educational family sing-a-longs and even a musical afternoon tea. Don’t forget to arrive early for your event to have a picnic or simply explore the expansive grounds.

Fans of rock ‘n roll will find themselves right at home at the Capitol Theatre in Port Chester. Starting out as a hot spot for live orchestra performances and showings of popular films of the times like “Casablanca” and “Gone With The Wind,” the Capitol shifted their spotlight towards the rock genre in the 1970s. Many rock legends performed on its Port Chester stage, like Janis Joplin, the Rolling Stones and Pink Floyd, making it hallowed ground for many fans.

Nowadays, the nicknamed “Rock Palace” hosts an array of performances that include ballet, comedy and bluegrass. Need a cool space for an event of your own? The Capitol rents out its iconic auditorium from 10 to 2,000 guests.

Beyond Spreading Your Wings

Spend an afternoon exploring Katonah’s vibrant arts scene with numerous galleries and world-class museums. And don’t forget to pose for a picture before you head out.

The folks at ArtsWestchester refer to themselves as a cultural service organization rather than a museum or showcase. Why? Since 1965, their focus has been solely on making sure that art is not only accessible but also nurtured and respected throughout the community. From its inception until now, the organization has invested more than $35 million into Westchester’s arts and culture.

By partnering with municipalities within Westchester and private businesses, ArtsWestchester works to establish public art throughout the community that’s accessible to all and free to enjoy. You can find many of the artworks they have sponsored on public bridges, libraries, hotels and even retail spaces. Besides sponsoring a multitude of art exhibitions across the county and state, ArtsWestchester also has their own gallery that visitors can peruse. There, depending on the time of year, you’ll find diverse artist commissions for a minimal entry fee (or, free for those who decide to become members).

Sculptures, paintings, ceramics, textiles, photography – you’ll find it all at Oak & Oil Gallery. Whether you’re just visiting to take a look around or you’re on the hunt for the perfect piece to display in your home, Oak & Oil has an unmatched selection of art. As only local artisans are displayed there, the gallery prides itself on supporting the arts community and county as a whole. Both experienced and up-and-coming artists are considered for exhibitions, further making this a truly accessible gallery for local artists.

Opened in 1919, the Hudson River Museum (HRM) has been a central fixture for American art, history and interstellar science for more than 100 years. Visitors of all ages can discover a range of individual works of art and rotating exhibitions, as well as tour Glenview, the Gilded Age home that served as one of the museum’s earliest locations.

Fans of the cosmos will be delighted to take a seat within the state-of-the-art HRM Planetarium where three shows on Saturdays and Sundays throughout the year transport kids and adults to space (virtually, of course). Other permanent exhibits include the Hudson Riverama and a sculpto-pictorama installation named “The Bookstore.”

2023 will be a year of transformation for the HRM as it unveils its West Wing expansion that will include panoramic views of the Hudson River, a special exhibition gallery, a sculpture court and river terrace.

Between their self-produced theatrical productions and the lengthy list of popular performing artists that come to play on their stage, White Plains Performing Arts Center (WPPAC) has something for everyone. Notable “mainstage” (or self-produced) performances of the past include titles such as “Sister Act,” “Les Miserables” and “The Color Purple.” All of the WPPAC mainstage performances feature a live orchestra and sets and costumes you might expect from Broadway.

WPPAC is also the only theater in the region of White Plains to offer educational theatre training programs that allow the younger generation of theatrically inclined folks to learn the ropes and put on their own performances.

World-class events and family entertainment go hand-in-hand over at Emelin Theatre. Take the kids to see performances made just for them like “Click Clack Moo,” “Junie B. Jones Essential Survival Guide to School” or “The Pout-Pout Fish” while you enjoy a night of pre-release film-viewing at Film Club. If live performance is more your thing, Emelin is also host to many music, dance and comedy shows within its theatre. Best of all, if you’re looking to support the arts by donating to Emelin Theatre, ArtsWestchester will match any new donations up to $8,500.