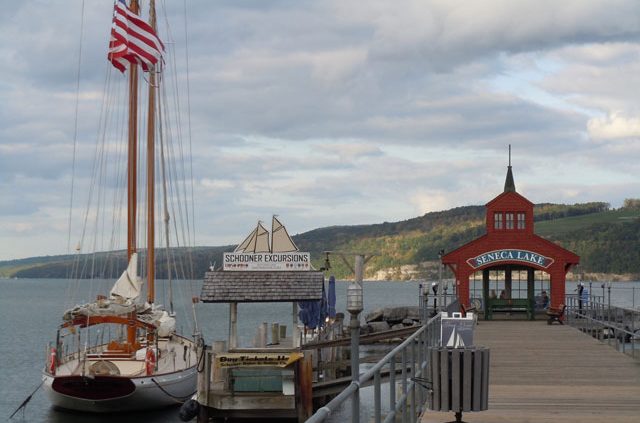 The view from Seneca Harbor Park, a hub for locals and tourists alike in Watkins Glen. (Photo: Aimée Carrier)

If you’re just passing through, Watkins Glen, N.Y., might seem like a blink-and-you-miss-it place. The village in the Finger Lakes region is only 2 square miles with a year-round population of about 2,000. Its downtown area, just a few blocks around Franklin Street (NY Route 14), is quaint, yet nondescript, with two-story brick buildings circa 1840-1940. Today, they house small retail shops and eateries.

On the surface, Watkins Glen might seem like an ordinary, unhurried, somewhat-rural community. In truth, it is a pacesetter. 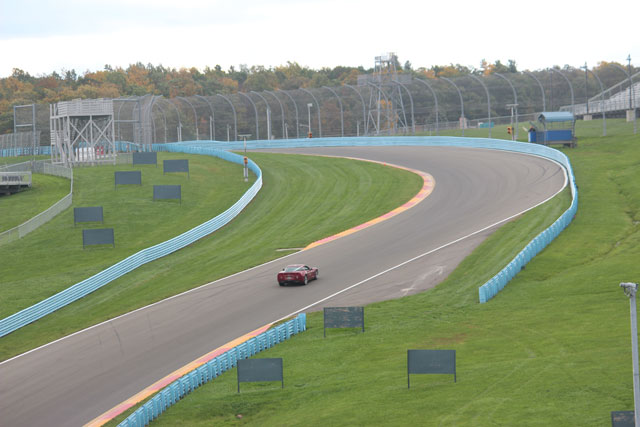 A car takes a run around Watkins Glen International in the off-season. (Photo: Floyd Shulze)

For racing fans, Watkins Glen International is high-revvin’ heaven. In fact, the history of car racing in these parts predates the raceway. Organized street racing started in Watkins Glen in 1948. The first track was a route through and around the village on twisting, turning, hilly roads – some paved, some not.

Today, visitors can still drive the original 6.6-mile grand prix race course used from 1948 to 1952. Maps are available at many locations including the racetrack, the visitors center downtown and the chamber of commerce website. I got mine from the front desk of the Watkins Glen Harbor Hotel, along with insight from the knowledgeable staff. Commemorative signs mark the road route, but so do speed-limit signs, mostly in the 25-mph range.

“Drive the Glen” at Watkins Glen International might be more your speed. On various occasions during the race season, April through October, visitors can experience the thrill of maneuvering the 3.4-mile road track for a couple of laps in their own vehicles. I was there in the off-season, so I didn’t have the opportunity, which was especially disappointing because I happened to be driving a rented Dodge Charger for my road trip. Anyway, the rules say you can’t push it beyond 55 mph or pass other vehicles, “especially the pace car.” I watched some racers taking impressive practice runs over the hills and curves of the track.

Watkins Glen cherishes its place in racing history. To learn more, you can make a pit stop at the International Motor Racing Research Center or be among the tens of thousands who attend the Grand Prix Festival each year. It takes place this year Sept. 9 on the streets of Watkins Glen. 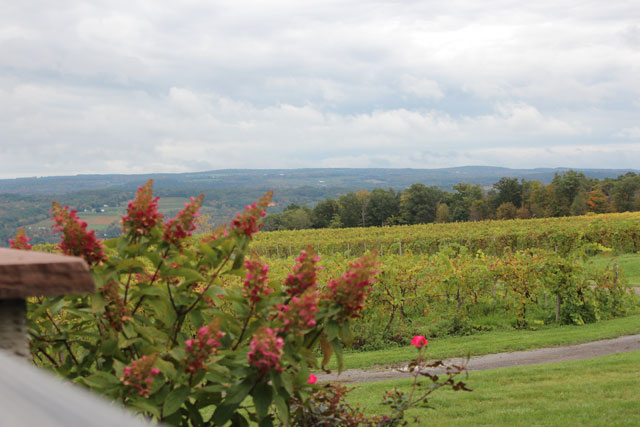 Car racing isn’t the only circuit in town. There’s another loop through Watkins Glen, N.Y., for wine enthusiasts. Watkins Glen has been dubbed “the Gateway to the Finger Lakes,” the largest wine-producing area in New York state. More than 100 vineyards operate in the region that encompasses 9,000 square miles. Most are in the vicinity of Cayuga, Keuka and Seneca lakes.

Situated on the south shore of Seneca Lake, Watkins Glen is on the Seneca Lake Wine Trail, which includes about 30 participating vineyards and wineries. Many of the wineries offer tastings and tours. Some world-class wines have been produced in the area. The slopes surrounding Seneca Lake are said to be particularly good for growing grapes. They also make for an attractive setting for sipping and gazing across the neat rows of vines toward the lake.

Needless to say, wine tastings and driving are a dangerous pairing, so it’s important to have a designated sober driver. Another option is to hire a transportation company. At Lakewood Vineyards, I met some women from Long Island on a group tour of the wine trail. They were traveling without worry on motorcoach. Their biggest dilemma was getting the wine they had purchased home. They had cases of their favorites that could only be bought in the area.

There are also various wine festivals held in the area throughout the  year, including the Seneca Lake Food and Wine Festival and the Finger Lakes Wine Festival.

Take a Road Trip to the Finger Lakes. 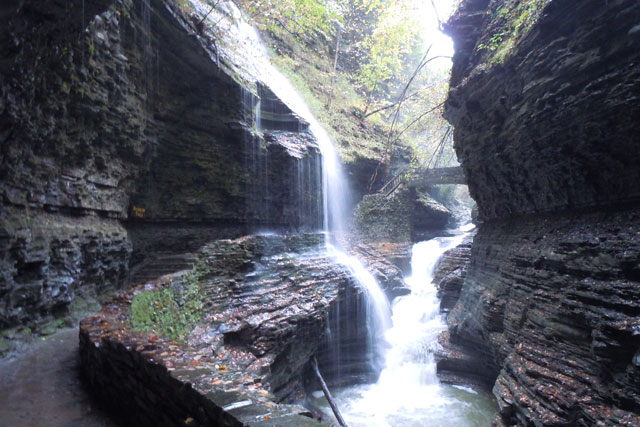 If you prefer peace with quiet rather than music and crowds, you’ll find tranquility in abundance at Watkins Glen State Park. The Gorge Trail is a must for any able-bodied visitor. It follows Glen Creek alongside – and sometimes under – its 19 waterfalls, past swirling pools and around and through water-sculpted rocks. Behind each turn in the path, beyond each water-carved tunnel, above every uphill climb is another brilliant view from every perspective – even if you are surrounded by crowds at this popular natural attraction.

I was lucky to avoid crowds on my visit to the gorge last fall. We enjoyed a guided tour in the rain armed with ponchos and umbrellas provided by the Watkins Glen Harbor Hotel. The soft but soaking showers enhanced the beautiful surroundings. The creek ran a little higher and faster through its turning, dropping passageway and the vegetation along the banks released large drops from its shiny water-drenched foliage into the water below.

Speaking of foliage: In mid-fall, when summer crowds subside, the hills surrounding Watkins Glen turn to vibrant shades of red, yellow and orange. The colors encircle the village and highlight picture-perfect scenes of farmhouses, croplands, barns and animals in the distance.

Please note that the Gorge Trail closes at the first sign of frost in fall and will stay closed until it is deemed completely safe from ice. 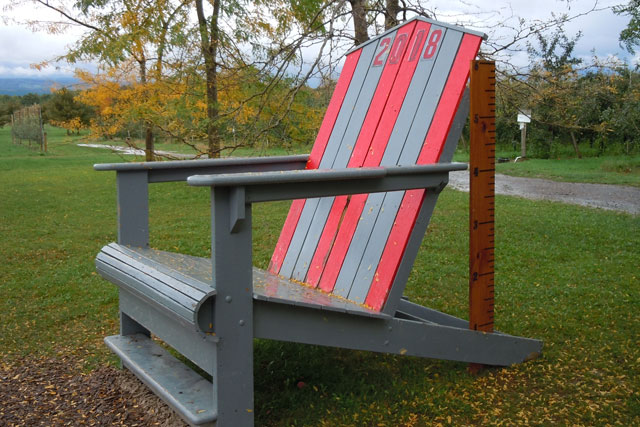 For families, there are a number of opportunities for outdoor activities. At Farm Sanctuary, a 300-acre shelter, you can interact with rescued farm animals and hear their stories. At Reisinger’s Apple Country, you can have a pick-your-own adventure. You’ll get to try the latest hybrid created by Cornell University’s apple-breeding program, like the SnapDragon, a trademarked mix with a Honeycrisp and an undisclosed apple variety. Whatever the other parent is, it helps make for a wonderfully sweet and crunchy snack. The Reisingers are test growers for Cornell’s new creations, which actually take about 10 years to perfect. There are pears, peaches and seasonal vegetables, too. Kids might get a kick out of the giant Adirondack chair. It’s also a fun growth-measuring stick for generations of Reisinger’s visitors. 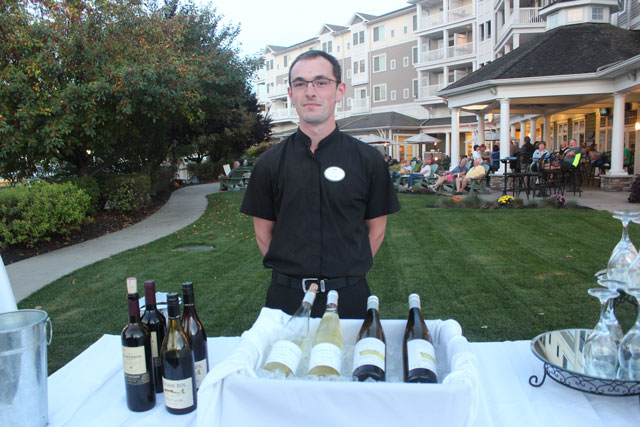 A sampling of Finger Lakes wine outside the Watkins Glen Harbor Hotel with its extensive patio in the background. (Photo: Aimée Carrier)

Some of the most spectacular views are from the AAA Four Diamond Rated Watkins Glen Harbor Hotel. Tucked behind the village’s main strip, it sits overlooking Seneca Lake. The hotel is a central location for visitors to explore the area with ease. Step out the main entrance for a leisurely stroll through the downtown neighborhood. Head out to the Watkins Glen State Park Gorge Trail, which is about a half-mile south on Franklin Street. Just a few miles to the north, you’ll come upon some of the most notable vineyards in Finger Lakes Wine Country. The Corning Museum of Glass is about 20 miles south. Book now.

A hub for travelers and locals alike, the large back patio at Watkins Glen Harbor Hotel is a casual, comfortable and enjoyable place to hang out whether you’re dining at the handsome umbrella-topped, wrought-iron tables, relaxing in an Adirondack chair or gathered around one of the gas-lit firepits. There’s often musical entertainment and seasonal activities, as well.

The Harbor Hotel shows pride its in community with a collection of local flavor. The restaurant pays homage to local products like melt-in-your-mouth cheeses, fresh produce and a good selection of Finger Lakes wines. The hotel decor reflects the community’s most notable characteristics: The walls are lined with photographs of orchards, vineyards, boating on Seneca Lake and spectacular images of Watkins Glen State Park and awe-inspiring vantage points of the Gorge Trail.

The Harbor Hotel staff members show genuine hospitality. They are unobtrusive and maintain a laid-back vibe while still attending to every detail of a guest’s stay. There’s an around-the-clock concierge, but you can also get local insight and insider tips from the many of the staff members who grew up in the area. After a steep winding climb up the Watkins Glen State Park Gorge Trail, I was impressed when a Watkins Glen Harbor Hotel staff member told me that she used to run the course to train for high school track.

The highlights of my stay were in the early morning and evening. In the morning, a beverage station is set up at the central elevator area of each floor. Coffee, tea, hot cocoa and more are available in whatever quantity you find necessary to start your day. Rather than fiddling with a coffee maker in my room, spilling sweetener and powdered creamer (never enough for me), I could stumble down the hall and return with a perfectly brewed, hot mug of coffee with real cream and any sweetener I preferred.

Every evening, I found a mouth-watering chocolate bar on my pillow. Even when we turned down turndown service, I was given a handful of chocolates. They sure knew how to put a smile on my face.

Have you ever been to Watkins Glen, N.Y.? Share your trip highlights in the comments.

FIND AND BOOK A WATKINS GLEN HOTEL WITH AAA.