Disney Insiders: Behind the Magic

Cast members discuss getting your foot in the door, behind-the-scenes magic, upcoming attractions and insider tips for your Disney vacation. 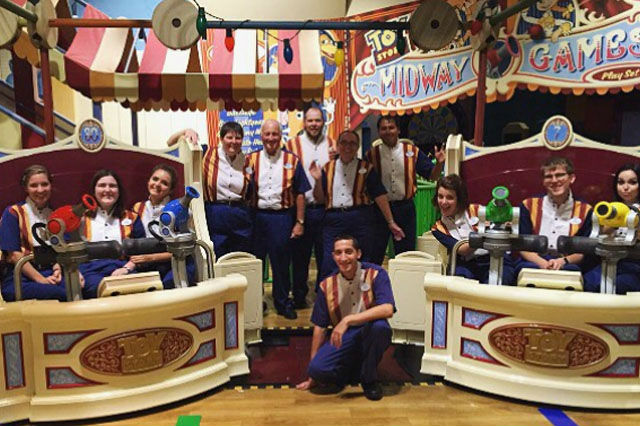 Walt Disney World is a huge organism, filled with thousands of cast members from around the world. After their time at Disney, some of those cast members wind up making magic at AAA. I am one of those former cast members (a veteran of Toy Story Mania, For the First Time in Forever: A Frozen Sing-A-Long Celebration and the Star Wars: A Galactic Spectacular fireworks). Recently, I had the pleasure of talking to Stacey Crowley, a travel sales manager at AAA Northeast who spent her early career working for the mouse.

Stacey and I were both part of the Disney College Program, which offers internships at Disney parks to college students. Many cast members start with the program, then stay on at Disney for years. Here, Stacey and I talk about getting your foot in the door, behind-the-scenes magic, upcoming attractions and other Disney insider tips for your vacation.

The following interview is edited for clarity.

Sarah: What were your roles at Disney?

Stacey: When I started, I did my college program at the Emporium in Magic Kingdom.

[The Emporium is a mammoth-sized souvenir shop that stretches all the way down Main Street, USA. To say the least, it gets a lot of foot traffic.]

Stacey: Yeah, that was great. Let me tell you. After that, I was on the opening team for FastPass+ [Walt Disney World’s former FastPass system]. I wrote the training manuals and integrated FastPass+ into attractions. Then I went over into entertainment. I was a performer for a while, and then I was a character attendant and then I eventually was a trainer and a captain for shows and parades. So it was good! It was a lot of stuff.

Sarah: How did you decide to do the college program?

Stacey: Well, my plan was not to go to college after high school, but part of the rule for being in the program was that you had to do at least one semester of college. So I literally went to college for one semester just so I could do the college program.

Stacey: I was like, “Listen, if this is what gets me in, I’m there.” It’s been my dream since I was probably 3 years old to work for Disney. My family used to go to Disney World literally all the time. There was one time when I was 4, and I had just met Mickey. My dad pointed his camera at me and said, “Hey, what did you think? How was that?” and I turned around and I said, “Dad, I’m gonna be Mickey Mouse one day!” And then fast forward 20 years later and that’s what I did.

Stacey: So you were in attractions, right? You did Toy?

Sarah: Yeah, I did Toy Story Mania at the time when it was the most popular ride in the world. So we were all, like, insane when we worked there. It was a lot of pressure, having to put all those people through the ride every day. And it was pretty safety-intensive, we were all eagle-eyed for people leaning on railings or getting too close to the tracks. But I liked working at Hollywood Studios. What’s your favorite park?

Stacey: It depends on the day. Animal Kingdom is probably my favorite overall, if I had to pick. I’m obsessed with animals and conservation and I actually foster an elephant at a sanctuary in Kenya. But Hollywood Studios has to get an honorable mention.

Sarah: Are you excited about the new “Star Wars” land that’s coming in?

Stacey: Oh yeah, I have six brothers, so I had no choice but to like “Star Wars”. I think it’s gonna bring a lot more to that park. And I think that park needs a little more love. And it’s so immersive. It’s going to bring a lot to Disney. Are you a “Star Wars” fan?

Sarah: I am, yeah. I mean, I got to be way more of a “Star Wars” fan working at Hollywood Studios than I ever was before. Because they were just starting to push all the “Star Wars” stuff, and I got a “Star Wars” name tag that said I was from Alderaan, which was very special.

Sarah: What’s your favorite Disney insider tip to give people who are visiting Disney World for the first time?

Stacey: Don’t be afraid of the pre-planning. It seems overwhelming, but it really takes away so much of the worry and the stress while you’re in the park. Another tip is to take advantage of the restaurants that are inside the parks. Magic Kingdom is a great example. If you can get breakfast at Be Our Guest, they start seating people an hour before the park opens. So you can go in and get pictures in front of the castle without anybody else there. You eat breakfast and then you’re literally right there in front of Seven Dwarfs Mine Train. And you’re the first on line.

Sarah: So what was your experience in entertainment like? I’m really curious.

Stacey: It was very challenging. I mean, I danced my entire life. I danced for 23 years – ballet, tap, jazz, pointe, but it didn’t prepare me for what it would be like. There’s nothing in the world to describe what it’s like to have a little kid come up and hug Mickey Mouse. You’re seeing it from the inside, and you feel the emotion when they give the hug. You know? We had this one little boy at the Incredibles Dance Party in Magic Kingdom. He had a wheelchair, and I think he was there for three weeks. But every day, he came to dance with Frozone and the Incredibles. That’s the only time he would get out of his wheelchair, to try and show off his dance moves.

Sarah: When, in your opinion, is the best time of year to visit Walt Disney World?

Stacey: People looking for less crowds should go the first two weeks of January, after New Year’s Day. The week after Labor Day is also usually a little quiet because everybody is going back to school. But if you’re looking for best overall time, meaning less crowds and more activities, I would highly recommend September. You get Mickey’s Not-So-Scary Halloween Party, you get the Food and Wine festival, there’s just more happening around that time.

Sarah: What do you think about the new fireworks show, Happily Ever After?

Stacey: I love it a lot. But I mean, I loved Wishes [the previous Magic Kingdom fireworks show]. When I worked at the Emporium, my team and I got selected to run “Project E” which was where we got the chance to manage a team of CPs to redesign the store to what it looks like now. We did all the windows and stuff. I had just turned 18, I had no experience, it was crazy that they trusted me to do something like that. At the end of our college program, the manager took us to the roof of the Emporium to watch Wishes.

Stacey: I know! Every time I think about it, I could cry. It was amazing. I’m very partial to Wishes, but the new one … the projections and everything about it. How could you not love a fireworks show that Disney does? I’m really happy that we have a focus on Disney at AAA. There’s nothing like having AAA to back you up, and to have all the experts in your corner. I’m not the only one on the team who used to work for Disney, or who has this level of appreciation. It’s a smart choice.

Sarah: Yeah, there’s a lot of cross-pollination between Disney and AAA.

Stacey: It’s kind of funny, right? That’s a good way to put it.

Do you have a favorite Disney World story? Share it in the comments below!