Take a Trip to the Wizarding World of Harry Potter 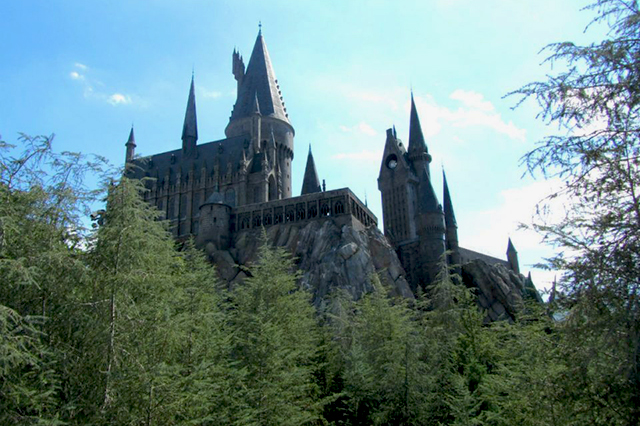 For two decades, the wizarding world of Harry Potter has captured the imaginations of young adults and adults alike. And if you thought the books and movies were magical, you should see the Universal Studios theme parks.

Back in the late nineties when Harry Potter made its debut, it quickly began to take the world by storm – of course, all I knew was that it was popular in the halls of my middle school, which at the time, basically was the world to me. For years, the series of novels were a staple of book bags everywhere as kids anticipated each new revelation in the story of the courageous young wizard with a funny forehead scar, his friends and “You-Know-Who,” the evil Lord Voldemort.

I remember reading the first book in the series, “Harry Potter and the Sorcerer’s Stone,” and being transported to Hogwarts School of Witchcraft and Wizardry on the Hogwarts Express. In my head, the magical world of Harry Potter unfurled itself – a place accessed through invisible train platforms, with spells and wands and chocolate frogs. It was the first book that I can remember feeling totally absorbed in, in a can’t-put-it-down, lose-track-of-time type of way.

After first being brought to life on the big screen in a hugely successful collection of films, author J.K. Rowling’s remarkable world can be experienced in tangible, physical form at Universal Orlando’s Wizarding World of Harry Potter. AAA members get discounted tickets to the park!

I recently got to see it for myself. I was on the Hogwart’s Express, I flew with Harry Potter on the Quidditch field and I drank Butterbeer like nobody’s business (it is delicious, by the way. It tastes like cream soda and butterscotch). Fiction became reality.

I may not be anywhere near “Potterhead” status – the Harry Potter super fans infamous for their passion for the particulars, but the level of detail and accuracy in the two parks was captivating. The attention put into every storefront, sign and sound to make it true to the story, made it all feel pretty real – and pretty magical. From Owl Posts to Moaning Myrtle crying in the bathroom, there are many nuances to be picked up on, many more of which I’m sure I missed. It was very impressive for a Muggle (non-wizard) like me.

FIND & BOOK A HOTEL IN ORLANDO

At the far end of Universal Studios, past Hollywood and the Simpson’s Springfield area, you are suddenly transported to London. The replicated streets of the city are complete with Kings Cross Station, Leicester Underground Square Station and red phone booths. The purple triple decker Knight Bus towers amid the scenery, welcoming you into the Wizarding World of Harry Potter. Visitors are invited to walk up and take pictures with the conductor and talking shrunken head from the film.

Diagon Alley is hidden just beyond the London Walls. The village is colorful and wonky, with signs that advertise wands and Quiddich supplies, “like Dickens through a fun house mirror” as it was described in AAA’s C&T magazine back when it first opened.

Some of the stores are real, others only storefronts. Among them are Weasleys’ Wizard Wheezes for your love potions and gag gifts, Madam Malkin’s selling wizard robes for all occasions and a dark corridor which leads to Knockturn Alley, filled with sinister and dark arts objects.

For food, there’s The Leaky Cauldron, an exact copy of the eatery in the movies that serves authentic British Pub Food, Florean Fortescue’s Ice Cream Parlour and vendors throughout that sell quintessential Harry Potter fare such as Butterbeer and pumpkin juice.

At Ollivander’s wand shop park goers can purchase a replica of their favorite wizard’s wand or take part in the magic themselves with an interactive wand. People of all ages can be seen casting spells throughout the park. If you happen to see lights flickering or water jumping, it just may be the handy work of a wannabe wizard’s wand.

At the far end of Diagon Alley is Gringotts Bank. You’ll spot it by the fire-breathing dragon perched on top. It’s the home of the 3D roller coaster and virtual reality ride, “Harry Potter and the Escape from Gringotts.”

As with all of the rides, the experience begins on line. The queue leads through the bank’s elaborate marble lobby beneath massive chandeliers, past hard working animatronic goblin tellers. The premise is that you are on your way to take a tour and open an account in the “Safest Place on Earth.”

A simulated elevator takes you all the way down to the underground vaults of Gringotts where Muggles are not welcome. Featuring familiar faces from the film, you become a part of the action as your rail cart is sent on a high speed chase, ducking the security dragon and menacing spells cast by villains including Lord Voldemort.

Seeing that the Hogwarts Express left such a memorable impression on me from the books, hopping aboard the iconic steam engine was one of my favorite parts about visiting The Wizarding World of Harry Potter. The train allows park goers to travel between both lands/Universal parks. Of course, it’s more than just a way to get from one point to another. Naturally, it is its own adventure.

At Kings Cross Station, the red Hogwarts Express train awaits at Platform 9 ¾. Don’t miss the illusion on the line (like I did), where you can watch the people in front of you disappear through the wall, just like in the story. Inside of the train car, the “windows” depict shadows of characters passing through the train on one side and scenery leading to Hogwarts on the other. A story plays out through the overheard conversations of Harry and friends, seemingly there in the car next to you.

The snow-capped village of Hogsmeade has similar shops to Diagon Alley, selling wands, wizardry school supplies and such. Honeydukes candy store was one of the most popular, jam-packed with eager tourists looking to get their hands on all kinds of novelty sweets from Chocolate Frogs to Every Flavour Beans.

Besides plenty of Butterbeer stops, snacking options include quick-service dining at Three Broomsticks casual British tavern, and if you’re in the mood for a real beer, Hog’s Head Pub next door. Rides in Hogsmeade include the Flight of the Hippogriff family coaster.

But the main attraction looms in the background: Hogwarts School of Witchcraft and Wizardry. Inside Hogwarts, there are surprises around every corner as you journey through hallways and corridors including Dumbledore’s office, the Gryffindor Common Room and the Defense Against the Dark Arts classroom.

It all leads to “Harry Potter and the Forbidden Journey,” a high-action ride that combines complex animatronics and sets with visual technology, for an experience that is as close to reality as you can get. Once again you are placed into the story as you fly beside Harry Potter over Hogwarts Castle, meet face to face with creepy dementors, and come within inches of a whomping willow.

For fans of the story, The Wizarding World of Harry Potter is an experience that can’t be missed, but I would recommend at least catching up on the movies first to fully appreciate all it has to offer.

Have you been to the Wizarding World of Harry Potter at Universal Studios? Tell us about your favorite part of the park in the comments.

Learn more about the Wizarding World of Harry Potter and find discounted ticket options with AAA.