High school students in Wilton don’t have to worry about how to get home on Friday or Saturday nights. Since 2013, Wilton Safe Rides has given thousands of teenagers easy... 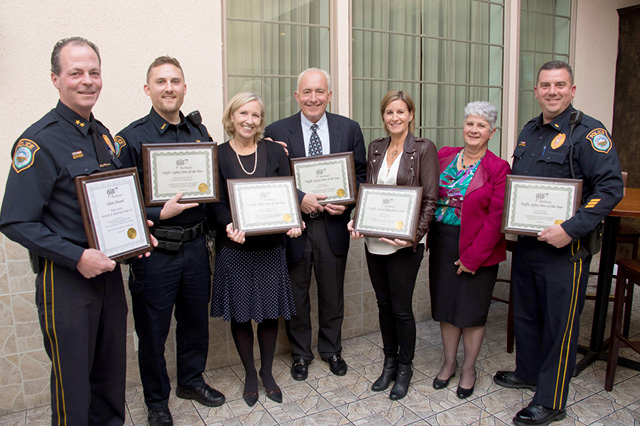 High school students in Wilton don’t have to worry about how to get home on Friday or Saturday nights.

Since 2013, Wilton Safe Rides has given thousands of teenagers easy and anonymous access to safe, free transportation.
Dozens of volunteers help operate the student-run group, which gives free rides home to high school students who call the hotline during the school year. Volunteer drivers typically travel in teams of two (one male, one female) to pick up those who’ve requested rides.

“The hard work of Mike, Lauren, Lisa and Abby has, without a doubt, prevented injuries and accidents, and has helped to make Wilton roads and the community safer,” said Wilton Police Lt. David Hartman, who nominated the four.
Nearly two dozen police officers representing 12 departments received similar recognition. Their achievements ranged from participating in mock crash events at high schools, enforcing efforts to cut down on impaired driving, instructing the AAA Driver Improvement Program and more.

“Making and maintaining safe roads isn’t something a single organization can accomplish. It takes commitment from numerous individuals and departments,” said Fran Mayko, public affairs specialist for AAA Northeast. “AAA is proud to honor those who work to protect all roadway users in western Connecticut.”