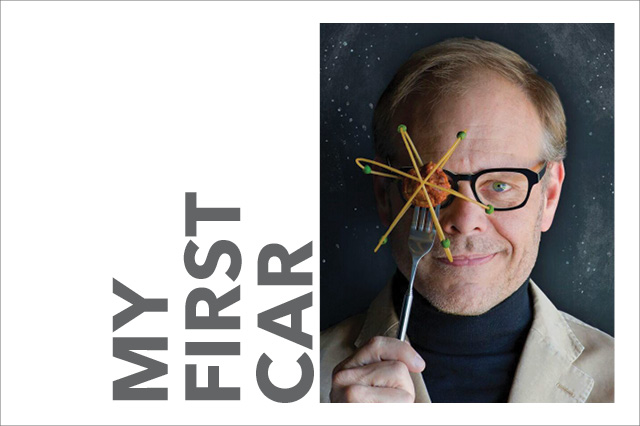 Host of hit Food Network television shows like “Iron Chef America,” “Good Eats,” and “Cutthroat Kitchen,” Alton Brown is an award-winning celebrity chef, best-selling cookbook author and musician (yes, he sings). See him live this month as he kicks off the next leg of the “Alton Brown Live: Eat Your Science” tour, which blends science, music, comedy and food.

My grandfather found it for me. He owned a service station that handled VWs and Audis, and he bought and sold used cars on the side. He wanted me to have something I could afford and that wasn’t fast enough to get me into any kind of trouble. I worked at McDonald’s to save up the $600 it cost me.

I actually bought the car when I was still 15 and driving under a learner’s permit. But I’d sometimes sneak out at night and drive it around. I lived out in the middle of nowhere, so I don’t think I was putting anyone in danger, but still, totally illegal. It was thrilling, though. I don’t remember driving ever being that much fun since.

Unfortunately, I totaled it. Badly. I got run off the road on a corner and didn’t have enough skill or experience to get it back on the road. I hit a utility pole. I walked away, but the two guys who were with me were in the hospital for a really long time. It changed my life for the better in the long run I suppose, but up to that point it was the most terrifying experience of my life. That Pinto taught me some powerful lessons.