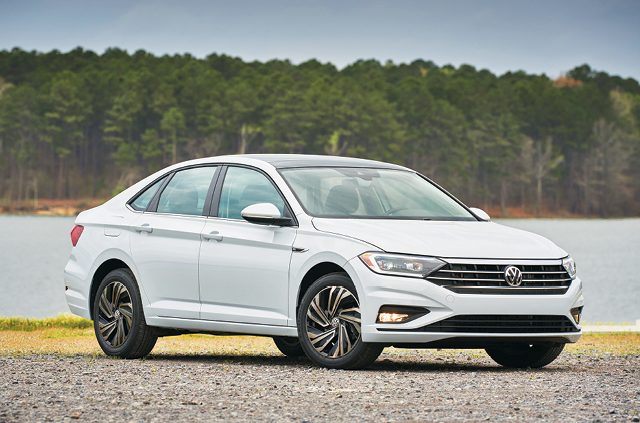 There are folks for whom the mere suggestion of driving a practical car generates eye rolls. If you’re one of them, the all-new Volkswagen Jetta will quickly wipe away that look of disdain.

You see, this new seventh-generation Jetta sedan looks and feels a lot more upmarket than the window sticker’s bottom line would suggest. That impression starts with the styling, which is on the sporty side of conservative; handsome without being flashy.

Much the same can be said of the roomy passenger cabin of the R-Line version I drove. Not much eye candy here, just an attractive and user-friendly layout of gauges and controls, flanked by high-quality, soft-touch materials everywhere that matters.

On the road, it is smooth and responsive. It’s not a sports sedan, but its nimble handling, strong brakes and precise steering make it one of the most satisfying small cars on the market from a driver’s perspective.

Add a starting price that’s actually a tad lower than that of the outgoing model, despite the addition of nice standard features like bright LED headlights and 16-inch alloy wheels, and you have a compact sedan anyone would be thrilled to drive.

When you manufacture the best-selling car in the U.S. for the past 15 years, you make significant changes at your peril. Such is the case with the all-new Toyota Camry.

In this instance, the substantial revisions to the eighth generation of this popular midsize sedan actually make it a better car all around. Like under the hood, where the available four-cylinder and V-6 engines are significantly more powerful and notably more fuel-efficient.

I spent most of my time in the four-cylinder version, and came away convinced it’s all the engine most folks will ever need. The addition of a healthy 25 horsepower, run through a smooth new eight-speed automatic transmission, gives this once unremarkable sedan a sprightly demeanor it’s never known.

The new Camry’s styling has been equally enlivened inside and out. Sweeping lines on the dash and bold grill treatments are just two high points.

Figure in a slew of new standard safety features, including automatic emergency braking and a lane departure warning system with lane-keeping assist, and this Toyota Camry has definitely changed for the better.