AAA Northeast held its annual AAA Traffic Safety Awards luncheon in October, recognizing individuals and police departments who have gone and above beyond to bolster traffic safety in Essex, Morris... 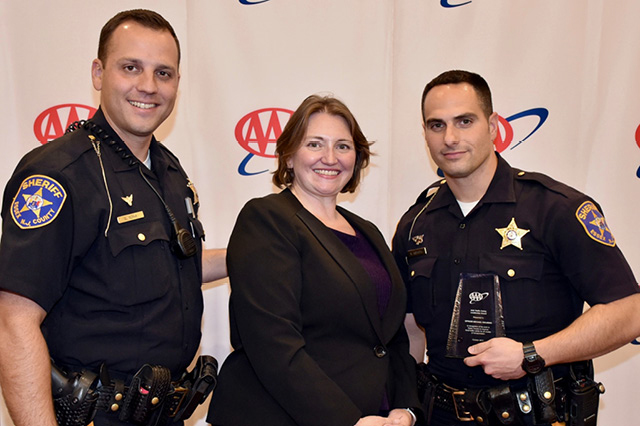 AAA Northeast held its annual AAA Traffic Safety Awards luncheon in October, recognizing individuals and police departments who have gone and above beyond to bolster traffic safety in Essex, Morris and Union counties.

• Sgt. Jesse Novalis, a 10-year veteran of the East Hanover Police Department, is passionate about pedestrian safety. He identified locations where pedestrians were most vulnerable and purchased two permanent blinking pedestrian lights to improve safety with the help of the East Hanover PBA (Patrolman’s Benevolent Association) Civic Association. Another light is planned for 2018. Novalis is a nationally certified accident reconstructionist, and a member of the special vehicle homicide response team for the county prosecutor’s office.

• Lt. Ed Davenport, of the Cranford Police Department, spearheaded a safety project in 2016 to protect pedestrians at a busy intersection with limited visibility. He worked with state officials to bring a pedestrian safety education and enforcement campaign to Cranford, and advocated for a flashing light to increase crosswalk visibility. Davenport also oversaw a strict enforcement period to modify motorist behavior and ensure pedestrians crossed the street correctly.