To someone unfamiliar with the depths of Irish culture, images of shamrocks and leprechauns and pints of green beer on St. Patrick’s Day might spring to mind. At least that... 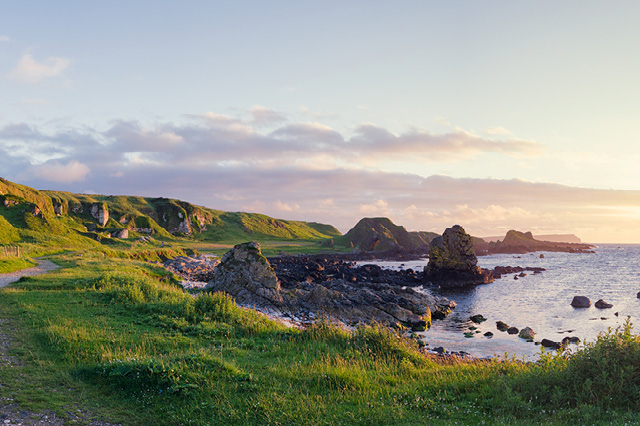 To someone unfamiliar with the depths of Irish culture, images of shamrocks and leprechauns and pints of green beer on St. Patrick’s Day might spring to mind. At least that was my experience before visiting Ireland.

Anyone who’s traveled to the Emerald Isle knows that its centuries-old culture goes far deeper than the American collegiate celebration.

A good way to immerse yourself in Ireland is by road. The island boasts plenty of landscapes to accentuate the drive, from fantasy-inspiring mountains to dramatic coastlines and green meadows.

A few days in Dublin are practically obligatory. Renowned Irish writers, including James Joyce, Oscar Wilde and Samuel Beckett, have passed through the city. It’s also the stage for much older writings: The Book of Kells, one of the world’s most well-known medieval texts, is on display at Trinity College.

Walking Dublin’s streets, it’s mind-boggling to realize that some establishments are more than 800 years old. For example, the Brazen Head, which offers a traditional beef and Guinness stew, has served patrons since 1198. And speaking of Guinness, the Guinness Storehouse is a popular exhibition about the beer brewed since the 18th century.

Ireland’s Wild Atlantic Way is made for scenic drives along the west coast. One of the more dramatic spots is the Cliffs of Moher, a 5-mile stretch of shale and sandstone standing hundreds of feet above the Atlantic Ocean.

Galway is a good base from which to explore the west coast. There’s a youthful vibe, with plenty of pubs and street performers on Quay Street. From here, you can easily reach surf spots at the beaches of Kilkee, or go rock climbing and zip lining in Westport.

County Kerry and the South

County Kerry is home to Ireland’s highest peak, Carrauntoohil. It’s also home to the Skelligs, a pair of islands made famous by the presence of Luke Skywalker in the new “Star Wars” movies.

Cork is the main city of the south, and it serves as a good base to explore the region – especially nearby Blarney Castle, home of the famed Blarney Stone.

The landscape may seem a bit familiar driving through Northern Ireland. That’s because some sites double as locations in HBO’s popular “Game of Thrones.” Castle Ward in Strangford is Winterfell, while the area around Slemish Mountain poses as the Dothraki grasslands.

Another fantastical-looking site is the very real Giant’s Causeway, comprised of about 40,000 volcanically formed rock columns. The site is a little over an hour’s drive from Belfast. When you’re in town, you can visit Titanic Belfast, an interactive exhibition about the famed Titanic, on the site where the ship was built.

You’ll never run out of awe-inspiring experiences on the Emerald Isle.

If you wish to travel to good old Ireland yourself, visit AAA.com/Travel or AAA.com/Vacations.