The Best Fall Foliage Drives for Your Ride 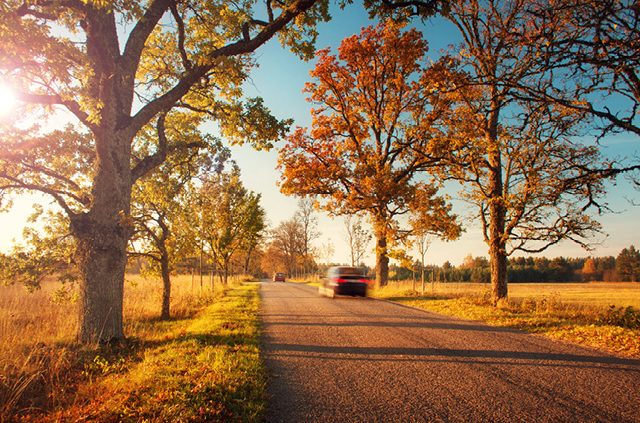 What does the car you drive say about your personality?

Well, obviously, if you drive a Porsche, you probably have tins of caviar in your refrigerator, and if you rock a Mini Cooper, it’s likely that you watch BBC television programmes on a regular basis.

Those are jokes, of course, but studies have shown a link between certain personality traits and the type of car a person drives.

For instance, 70 percent of BMW owners consider themselves more knowledgeable than most people, and 49 percent of Volkswagen customers believe they are more imaginative, according to a survey of 200,000 Americans performed by market research firm YouGov.

So why not embrace the personality of the car you drive with a road trip that suits your vehicle preferences?

Celebrate your car’s charisma with one of these fun fall foliage drives.

Looking for great insurance coverage for your ride? Visit AAA.com/Insurance.

A view from the Kancamagus Highway as it passes through White Mountain National Forest.

Green car drivers – that is, those who prefer electric or hybrid cars – will love the vibrant reds and yellows along New Hampshire’s Kancamagus Scenic Byway, a 30-mile stretch of Route 112 that cuts through the 800,000-acre White Mountain National Forest. Start your trek through the colorful mountainscape by embarking west out of Conway. Stop at the Saco Ranger Station for a map, which you can use to locate scenic overlooks, historic sites and picnic areas along the “Kanc.” There are hiking trails on the route, including a handicapped-accessible trail to Sabbaday Falls, one of the state’s most popular waterfalls with a 45-foot drop. West of the Jigger Johnson Campground, make a pit stop at the Russell-Colbath Homestead, a wood-frame home built in the early 1830s. Foliage along the Kanc peaks in late September through early October.

A hiker sits on Mount Greylock, near Massachusetts’ Mohawk Trail.

Those who crave thrills with their foliage – while in the front seat of a four-wheel-drive vehicle – should try the 60-mile Mohawk Trail in western Massachusetts. Native Americans once used to ship goods to Connecticut and New York’s Hudson Valley along the route, which runs along state Route 2 from Orange to North Adams in between 50,000 acres of state parks and Berkshire forests. As you approach the landmark Golden Eagle Restaurant in Clarksburg, beware of the notorious hairpin turn. Hit up observation points as you ascend the mountains for jaw-dropping views of Vermont and New Hampshire in the distance. Veer off the trail in North Adams for a 10-mile driving excursion to the summit of Mount Greylock, which at nearly 3,500 feet is the highest point in Massachusetts. For more thrills, head to Zoar Outdoor Adventure Resort in Charlemont for a zip line canopy tour. Foliage peaks here in October.

The Castle Hill Lighthouse at sunset.

Bust out the muscle car for a little showboating across the Rhode Island coast. Newport’s Ocean Drive loop is loaded with huge mansions and spectacular views of the Atlantic Ocean. And while the 10-mile drive can be completed in a half-hour, there are enough landmarks and leafy public parks to make a day of it. As you roll past mansion after mansion, including the childhood home of Jacqueline Kennedy Onassis, bring your baby by the historic Castle Hill Lighthouse and Brenton Point State Park. Brenton is home to a popular kite festival every summer, but you can still enjoy its hiking and picnic areas in the fall. Plus, it’s a pretty popular place, so you’re sure to turn heads in a gorgeous car. The loop also passes Fort Adams State Park at the mouth of Newport Harbor. Hourly tours of the military fortress are given daily between 10 a.m. and 4 p.m. Another must-see is the world-famous Newport Cliff Walk, a 3.5-mile trail along the stunning rocky Newport shoreline. October to early November is the best time for foliage in Newport.

A view of the Mystic Seaport in Connecticut.

If you’re bringing the kids, you’re going to want to plan plenty of fun stops. The Last Green Valley in Connecticut has landing spots galore, which are steeped in history for everyone to enjoy. Parents will revel in trees flush with foliage during the 35-mile drive from Woodstock to Norwich via Route 169. There are cute towns flaunting Colonial architecture and many dining options on the way. In Norwich, parade down the 2-mile Benedict Arnold Trail, where you can see the birthplace of infamous turncoat and other historical buildings. When you’re done in the valley, there’s also the option of traveling another 30 minutes south to family-friendly Mystic Seaport, a re-created seaside village that houses more than 50 historic houses and shops. The Children’s Museum is perfect for aspiring sailors age 7 and younger, and the whole family can take a tour on the steamboat Sabino, which dates back to 1908. Foliage peaks in Connecticut in late September and early October.

Keep it simple in a compact sedan with a fall foliage driving tour through western New Jersey. A good place to start is High Point State Park in Sussex County, where you can catch glimpses of the lush forests as they illuminate all shades of autumn. When you’re ready for a break, hike a section of the Appalachian Trail within the park to the highest elevation in New Jersey. A 220-foot monument in honor of war veterans will meet you there. Climb the stairs to the top for sensational views of the Pocono Mountains in the west, the Catskill Mountains to the north and the Wallkill River Valley to the southeast. When you’re done exploring High Point, drive 30 minutes south to Stokes State Forest in Branchville. Soak up the autumn hues on the way down and arrive to find 12 miles of forests, streams and scenic vistas that straddle the Kittatinny Mountain Ridge. Foliage peaks here in October.

For those who boast a spectacular ride like a Porsche 911 – and want to take said ride on the foliage drive of a lifetime – might I suggest New York’s Hudson Valley as your destination? Take the scenic Taconic State Parkway to get started. Cross into Ulster County via the Mid-Hudson Bridge in Poughkeepsie. Follow Route 44/55 for a heart-stirring drive through Minnewaska State Park and the spectacular Shawangunk Ridge. There are several parking areas along the route where you can park for photographs that will make you Instagram famous. As you descend the mountain, look like a boss as you cut the hairpin turn (safely) in your flashy whip. Drop by Tuthilltown Spirits in nearby Gardiner to pick up a bottle of Hudson Maple Cask Rye Whisky or Hudson Four Grain Bourbon, then sip your drink of choice as you stare at the glorious foliage from the window of your room at the historic Mohonk Mountain House, an extravagant lakeside Victorian castle resort surrounded by 40,000 acres of forest that make for an incredible sight come fall. Foliage peaks here in late September and early October.

If you want to try out these drives but don’t have the right ride, why not rent one for foliage season? Visit AAA.com/Hertz.