Tag: fun places to visit in the northeast

As the oldest part of the country, the corner of the U.S. that includes the New England states, New York, New Jersey and Pennsylvania is home to thousands of attractions. And because the region is geographically small, compared to the rest of the country, attractions in the Northeast are an easy drive from almost anywhere in the area. In particular, the Northeast boasts an abundance of historical sites and beautiful beaches. [text_ad]  Some of the most well-known Northeast tourist destinations include Boston sites such as the Old North Church, Fanieul Hall, the Freedom Trail and Fenway Park. Outside of Boston, travelers can take road trips to Acadia National Park in Maine; the White Mountains of New Hampshire; Newport, R.I. and the many beaches of Cape Cod, including Cape Cod National Seashore, among many other Northeast destinations. New York City is of course a destination all by itself, with attractions ranging from Radio City Music Hall to numerous professional sports stadiums to Coney Island and the Metroplitan Museum of Art. Outside the city, day trips take travelers to places such as Long Island, with its many beaches, parks, gardens, historic sites and museums. Longer trips from New York City include West Point, the Roosevelt home and Rhinebeck Aerodrome in the Hudson Valley; the Jersey Shore towns, Cape May, and Six Flags Adventures in New Jersey; and the covered bridges of Bucks County, Philadelphia and Pittsburgh, and amusement parks such as Sesame Place and Hershey Park in Pennsylvania. Also, things to see in upstate New York include Boldt Castle in the 1000 Islands, Howe Caverns in Schoharie County and the stunning Corning Museum of Glass. Connecticut day trips from New York include Mystic Seaport, casinos at Foxwoods and Mohegan Sun and historic Hartford. 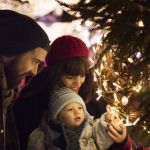 From elaborately lit neighborhoods, make the season bright with a drive out to one of these nearby holiday light displays. 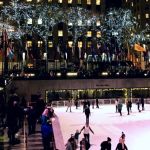 Fun Places to Visit in the Northeast for the Holidays

Searching for something to do this holiday season? Look no further than this list of fun places to visit in the Northeast!