AAA School Safety Patrol Program continues to build on its legacy of safety and leadership. 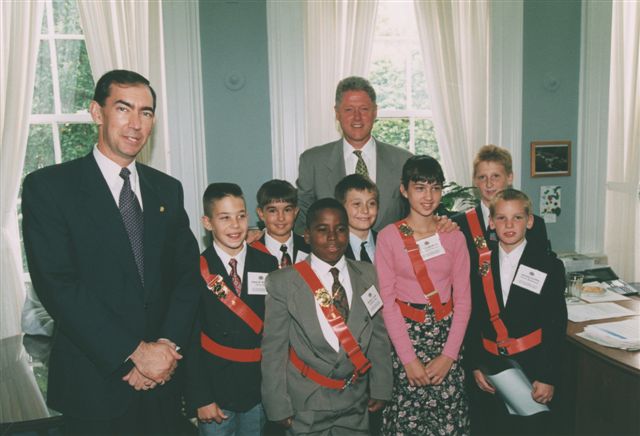 The belt color may have changed quite dramatically over the 100 years of the AAA School Safety Patrol Program — from white to neon orange to today’s fluorescent green called ’Lectric Lime — but the mission remains the same: To provide a safer environment and leadership opportunities for millions of schoolchildren.

In honor of its centennial, let’s take a look back at how this historic program came to be and the impressive alumni it counts among its ranks.

The idea of school boy patrols began in 1920 when Charles M. Hayes, then president of the Chicago Motor Club, built the infrastructure and provided the resources so that AAA clubs across the U.S. could protect school-age children walking to and from school.

Hayes witnessed several children at a school crossing get killed by a speeding car. After the horrific incident, Hayes pledged to help prevent such a tragedy from happening again and from that day forward Patrollers received traffic safety training designed to keep children safer to and from their way to school. Because of Hayes’s steadfast dedication, the program is now 100 years strong and continues to have a positive impact on schools, students and communities.

In the 1930s, three national organizations – AAA, the National Congress of Parents and Teachers and the National Safety Council – collaborated on Standard Rules for the Operation of School Boy Patrols. These guidelines have been updated over the years to become the operating standards for AAA School Safety Patrols.

Since its creation, the program has included 670,000 Patrollers in 35,000 schools, making it the world’s largest safety program. Today, these brave young leaders dedicate their time before and after school each day, working with teachers, supervisors, adult crossing guards and law enforcement to ensure the safety of their classmates.

“AAA School Safety Patrol plays an important role in helping young pedestrians learn and fulfill responsibilities regarding traffic safety,” said AAA Traffic Safety Advocacy and Community Impact Manager Rhonda Shah. “Millions of American children have honorably served their classmates since the program began in the early 1920s, and interest in the program has spread around the world.”

The AAA model has been adopted in at least 30 other countries, including England, France, Germany, the Netherlands and New Zealand. The program has been praised by national and international safety and education groups for reducing deaths and injuries among 5-to-14-year-olds, the age group most at risk for pedestrian injury.

Did you proudly serve on AAA’s School Safety Patrol? AAA members are encouraged to submit their photos at AAA.com

February is Heart Health Month. AAA Northeast has teamed up with the American Heart Association to raise awareness.