The History of Car Keys

For decades, mechanical car keys used to start an automobile were standard. Now those jagged pieces of metal are nearly extinct. The history of car keys has a story to tell. 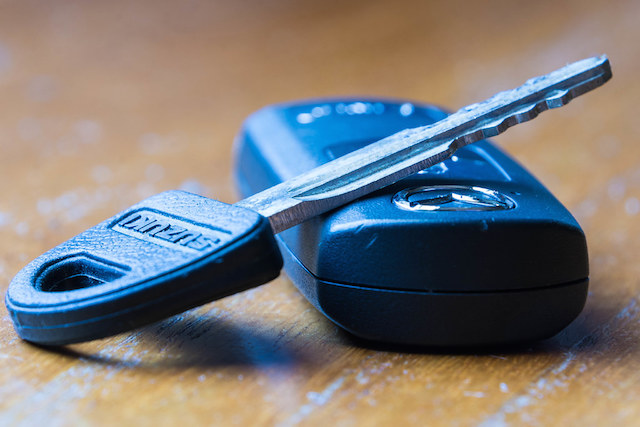 What connotations come to mind with the words “car keys?” Bad thoughts, like frantically ransacking your house, bags and pockets in search of them? Good thoughts, like being handed them for the first time at a dealership or flicking your wrist and hearing the engine come alive?

Either way, these experiences are likely to soon be stowed-away memories of a different time: The truth is, the history of car keys as we know them is quickly coming to a close.

Just about every other aspect of automotive technology has drastically evolved over the past century, and the keys we use to open and start our cars are no different. But car key history is unique in that instead of simply improving the feature, current technology has rendered traditional car keys obsolete, sending them the way of the dodo, car ashtrays and crank windows.

That renders the age-old question: How did we get here? Let’s take a look back.

The History of Car Keys Begins

Car key history can be traced back to 1910, but these early versions didn’t start the engine or ignition. Instead, the first car keys controlled the ignition’s electrical circuit. Using the key, car owners could switch off the flow of electrical current, making it impossible to start the vehicle. Once the switch was on, the ignition could be activated, although drivers still had to then crank up the engine.

Soon after, keys that could lock and unlock both the electrical circuit and the ignition became more common.

Because it was still impossible to start the engine without a key, car theft was not a concern, and “locking” a car wasn’t a practice. In fact, most early automobiles were roofless and some were even door-less.

A major milestone in car key history occurred in 1949 when Chrysler unveiled the first car key that could start a vehicle’s engine all on its own. It was able to do so through the use of an ignition tumbler, or ignition lock cylinder.

In 1965, Ford became the first manufacturer to introduce double-sided keys that could be inserted into the tumbler either way. While seemingly elementary by today’s standards, these types of car keys remained the norm for decades.

This was also around the same the time the dual key, which could both start the car and unlock the doors, took hold. Prior to the 1960s, some vehicles still required two separate car keys.

Car key evolution was mostly dormant for the next quarter century but took some momentous leaps in the 1990s. It was this decade that saw the rise of the now ubiquitous key fob.

Remote keyless entry fobs allowed car owners to lock and unlock vehicle doors from afar by emitting a coded signal through radio waves to a receiver in the car. As technology developed, key fobs gained more functions, such as opening the trunk or sliding doors and starting the engine remotely.

(If you’re curious about the strange name, according to The Atlantic, “fob” may come from the word “fuppe,” which means “pocket” in the low German dialect.)

Car fobs are very expensive to replace. Make sure you’re protected with AAA’s Tire & Wheel Program, which covers lost keys and key fobs up to $5,000.

The traditional, mechanical car key is quickly becoming a thing of the past – if it’s not already a relic of automotive history. Almost all of today’s new vehicles have some version of a keyless entry and push-button start system. In fact, according to consumer auto research firm Edmunds, 91% of 2019 model-year vehicles had keyless ignitions. That’s up from 72% in 2014.

We’ve come a long way from having to carry one key for the engine and one key for the doors. But apparently one key is still one too many: Drivers can now store a digital car key on – where else – their phones.

Apple’s Wallet app includes a feature to add your car key. In order to do this, you need to have a compatible car as well as an iPhone or Apple Watch. Once installed, a user simply places their phone or watch next to the car’s door handle to unlock the vehicle. To start the car, they just place the phone or watch in the car’s key reader and press the start button. When an owner wants to share their key, they can simply send an iMessage to that user, which tells them how to add and use the car key.

Tesla owners can use the company’s smartphone app to do many of the same things. The app can track a driver’s smartphone from up to 30 feet away and automatically unlock the doors by the time they reach the car. But the electric automaker isn’t alone. Several marques, including BMW, Hyundai and Lincoln, offer digital car keys, making the trend’s rise seem more assured and imminent.

What are your thoughts on car keys today? Do you like the idea of a digital key on your phone or would rather have a tangible key you can hold? Let us know in the comments below?

108 Thoughts on “The History of Car Keys”