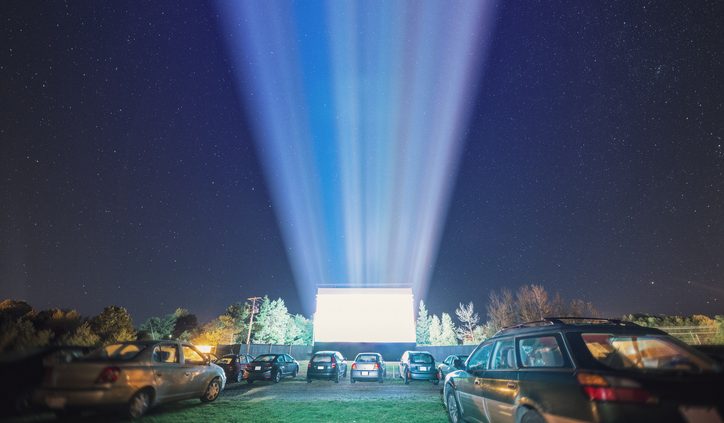 Drive-in movie theaters are more than just another way to watch a film — they’re an experience. And for much of the 20th Century, the drive-in was an iconic part of the American soul, as ingrained in pop culture as any Elvis or Chuck Berry song.

But like jukeboxes and pinball machines, drive-in theaters are a vanishing breed. In 1958, more than 4,000 drive-ins packed them in (sometimes, with a stowaway or two in the trunk) across the nation. Today, only 305 such theaters are left in the United States — half as many as even just a decade ago, according to the United Drive-In Theatre Owners Association. [A state-by-state selection of drive-ins can be found at the end of this article.]

Though a warm-weather enterprise, drive-ins continue to flourish in colder climes. Many in the Northeast don’t realize it, but there are more drive-in theaters in New York state (28) than in California, Arizona, Louisiana, South Carolina, New Mexico, Hawaii and Nevada — combined. Pennsylvania has the second-most in the nation, at 26.

And in an age when many of us converse via text or social media (while craving ‘authenticity’), the drive-in is returning to its roots as a fun and flirty communal hub.

The origin of the drive-in theater is a matter of some dispute.

The accepted history is that the first drive-in opened in Pennsauken Township, N.J. in 1933. The theater was owned by local businessman Richard Hollingshead, Jr. who, a year earlier, nailed a giant screen to some trees in his backyard, placed a radio behind it and set a Kodak projector on the hood of his car. He perfected then patented the technology in 1933.

The theater’s slogan? “The whole family is welcome, regardless of how noisy the children are.”

While Hollingshead may have been visionary in some ways, he may have been short-sighted in others. After failing to make a profit, he sold the theater three years later, just as drive-ins began to catch on nationwide.

But was Hollingshead really the founding father? An outdoor theater in Las Cruces, New Mexico opened during the silent-film era, in April 1915, and another opened in Comanche, Texas in 1921. And long before Hollingshead’s patent, many small towns showed outdoor movies in the late 1910s and throughout the 1920s, as much a communal event as any town hall meeting or church picnic.

One such town was Schoharie, N.Y., about 40 miles west of Albany. In 1917, the small town started an outdoor movie series free to the public every Thursday night as a way to generate foot traffic for downtown merchants.

“It was so successful that this village with a population of 800 would get thousands, even nearly 10,000 people coming; a special bus would run from Schenectady every Thursday,” said Dwight Grimm who, together with his partner Leigh Van Swall, run the Greenville Drive-In in Greenville, N.Y. “All of the nearby farmers would come to socialize. Many of them weren’t watching, they just came to mingle.” 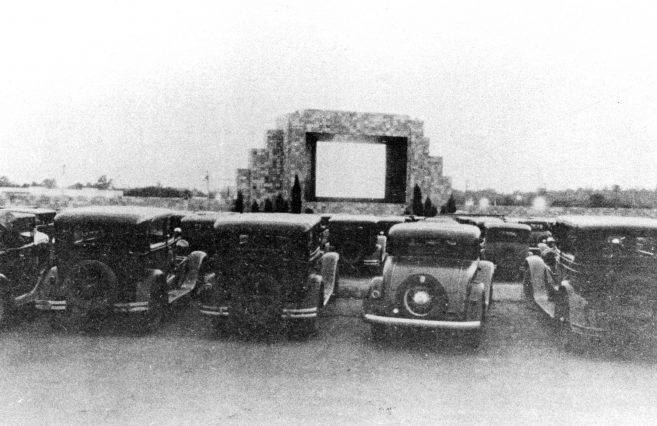 The first drive-in theater in America, the Park-In Theater in Camden, N.J.

Grimm recreated that first Schoharie event a century later, in 2017, complete with a fleet of Model T Fords (one of which had a hand-cranked projector atop). On the bill? A screening of the first silent film shown in Schoharie, “The Awakening of Helena Ritchie.”

Grimm’s focus on novelty is no accident. Today, the drive-in industry is divided between larger companies that show first-run Hollywood movies on digital projectors, and smaller theaters that survive through creativity and flair.

The cost of converting to digital equipment in the mid 2000’s was a blow for many owners/operators. The big studios won’t release a first-run movie to a venue unless it has the most modern equipment, and digital projectors can cost upwards of $100,000.

“The conversion to digital was a death knell for a lot of smaller operators,” said Josh Frank, who runs a boutique pop-up drive-in called The Blue Starlite, with locations in Austin, Texas and Vail Valley, Colorado.

For Frank, a film school graduate, the drive-in is a labor of love.

“A lot of the smaller mom-and-pop shops like me, they do it because they’re passionate,” he said. “They want to be creative; they’re in love with the idea, the romance of the drive-in.”

The Blue Starlite is as boutique as it gets, a mini-urban drive-in with space enough for just 30 cars, mostly featuring throwback classics such as “Grease,” “The Goonies,” and “Back to the Future.” While sodas and popcorn account for some of its income, the Blue Starlite specializes in add-ons, creative ways to heighten the experience that blend the old and new—one package deal, for instance, includes virtual reality goggles and car-hop service.

“We bought an RV and people can rent it for small groups, to party for the evening,” he said. “You can pick the movie you want to see, or even use the screen for karaoke or video games.”

Grimm, too, ups the ante through creativity. For the Greenville Drive-In’s 60th anniversary this year, he featured 1959’s top film, “Some Like it Hot” as a ‘ukulele party,’ where patrons could jam together or steal the spotlight at an ‘Open Mic’ before being treated to a concert by a professional musician an hour before the show.

It’s been a tough grind for Grimm ever since he resuscitated the drive-in in 2015. But today, the Greenville Drive-In is something of a community resource, much as the silent films shown in Schoharie were 100 years ago.

“If our goal was to financially enrich ourselves, reviving a drive-in is the most knuckleheaded idea you could come up with,” said Grimm. “But in terms of something with community value — a gathering that brings together a diverse local crowd — it’s awesome.”

A Selection of Northeast Drive-In Movie Theaters to Check Out

What’s your favorite memory of going to a drive-in theater? Let us know in the comments below!